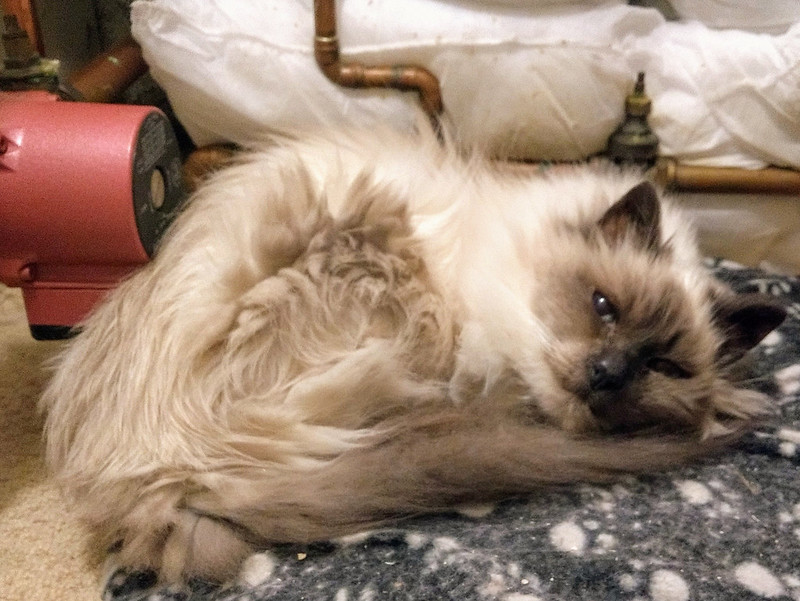 Happy birthday monty. Hes gorgeous. Is he a ragdoll? I love ragdolls
Top

He's a Birman, Zara - though Birmans and Ragdolls are so similar it can be hard to tell them apart

He really fooled me then i thought he was a Ragdoll.
I hope your knee gets better, i know how you feel i went and did something stupid on our way home and injured my Left Hip and im stuggling to walk for long periods. Im seeing my GP later today. I feel awful for lara as shes not getting anywere near the exercise she normally gets. Luckliy shes a laid back girl and is enjoying the several brain games i give her.
Top

Happy 21st Monty - what an achievement! He is so gorgeous.

I hope painful knees and hips improve soon - I know exactly how limiting these injuries are.
A dog is never bad or naughty - it is simply being a dog

Iv seen my GP this morning and shes told me its not my hip that hurts she said its a ligament that i have either pulled or torn as were the pain is is lower than were my hip is. So im on bed rest and anti inflammatorys
Top

I hope it mends soon, Zara. I've come to the conclusion that anti-inflammatories simply don't work for me (they were tested on males... go figure). But I definitely recommend taking a stomach protector with them, such as omeprazole - I was fine taking ibuprofen for over a week with that, usually it upsets my stomach after just a couple of doses.

We need to be more proactive about avoiding cars with open doors/boots. OH took Jasper to the park over the weekend and he leapt into the open boot of a car (luckily belonging to dog-walking friends), ended up in the front seat, and when OH got him out the front he ran to the boot and jumped back in again

This has been a thing ever since he spotted a rawhide bone about 2' long in another friend's car. It wouldn't be so funny if it was some strangers who'd just done their grocery shop

(Normally he'd be on lead near any sort of car park but this is just a small pull-in and they were a fair way away when J spotted his opportunity.)
Jasper, lurcher, born December 2009
Top

I didnt take the anti inflammatorys in the end i had a natural remedy that i have used in the past for muslce and ligaments issues and i feel a little better. I also took a natural supplement for pain which has helped. It'll take time i think.
Top

Dog and I were walking somewhere at a time we don't normally meet other dog walkers. We had just left the car park and my dog was off lead and walking quietly with me. A lady approached with a dog on a lead - one of those big grunting barging labradors all bonhomie and contact sports - and actually asked me if it was okay to let him off the lead!!!!! And I explained mine was a little nervous of bouncy dogs - she agreed hers was bouncy - and kept him on the lead until he was well past us. Obviously I thanked her very much for her courtesy.

Just when I think the dog-walking world is full of imbeciles, I meet someone considerate. It made my day.
A dog is never bad or naughty - it is simply being a dog

I love that description of labradors

My usual one is 'Boris Johnson'. I do wish dog etiquette was taught in school, with plenty of material sent home to inform the parents too. I love it if a child asks if they can stroke Jasper - I always explain that they can't, but tell them how wonderful they are for asking

Had a similar kind of "yay for people not assuming things" moment today, Nettle! Was working with an adolescent GSD with some fairly mild stranger-danger (big surprise ;P ) and two kids got out of a car and were talking to their mom -- "Mom, look, doggy! Can we go say hi?" It didn't take voice-of-dooming them to get them to just go on their merry way, just saying "Sorry, he is still learning his manners. Maybe next time!" and they waved bye-bye and left. Woohoo for parents who listen to us and back up what we ask them to do, and teach their kids to ask from a distance, not run up to the dog and ask from within lunging distance

(I was ready to body-block the kids to keep them at a comfortable distance from the dog. This dog's owner is quite experienced and has had challenging dogs before -- even wrote a book about one which has received praise from people like Patricia McConnell -- so it's quite flattering that she's picked me to help her!)

I've applied to foster a dog from a group that are on their way out from a doodle puppy mill, and it looks like they haven't had much interaction or socialization at all. I'm crossing my fingers for the small maybe collie/poodle, but I'm leaving it up to the rescuer who can see more of the dogs' personalities while they get them vetted and groomed over the next few days. (They're all doodles of some sort, and they ALL need grooming, probably just shave-to-the-skin grooming.)
Delta, standard poodle, born 6/30/14
Top

Erica wrote: ↑
Sun Mar 10, 2019 7:31 pm
This dog's owner is quite experienced and has had challenging dogs before -- even wrote a book about one which has received praise from people like Patricia McConnell -- so it's quite flattering that she's picked me to help her!

Yes indeed!
A dog is never bad or naughty - it is simply being a dog

Can't believe I'm giving a dog treats for peeing inside, but I figure I have to show him that peeing where I can see is good, so maybe I can get him to pee outside. A rescue in New Jersey is helping get the dogs out of a Kentucky puppy mill. Lots of doodles, it seems. And for some reason they're making a pit stop in my state for a month? So I'm hosting an ex puppy mill dog, about 3 years old, and getting him used to the whole "living inside" thing. Until a few days ago, he had no shelter from the elements at all.

But for all that, he's adapting quickly! Gave him a bath so he doesn't stink of feces anymore (he was still shut down at that point but I figured just get anything unpleasant done quick so he doesn't backslide in his healing), taught him to follow leashes instead of fight them, and am now able to put the collar on him with less fuss than Delta gives me for some harnesses.

The one thing that he has in spades is environmental stability. Doesn't care what's under his feet, will walk on all sorts of surfaces, jumped up on top of one of those big sterilite containers (it's so slippery and flexy...WHY would you do that? but he's done it a couple times so there's something interesting to him)...he even walks right over the bars of storm drains. No concerns that some of his toes are just dangling into nothing. He tried to use a glass -- a made-of-glass drinking container -- as a chew toy. Didn't mind the texture or the awful sounds it made. But I traded him for a retrieving dummy that made similarly awful sounds and he was happy with that.

I don't think Delta is *thrilled* with his new roommate. There's no aggression or annoyance, but he's definitely checking in with me and staying closer than normal. Also he's humping Derby a lot. So he's often on a leash if I want to sit down for a moment. But he's getting better -- sometimes there are good stretches of time where they just walk around or hang out in the same room without an issue. Derby wants to cuddle with Delta but Delta's not quite about that yet.
Delta, standard poodle, born 6/30/14
Top
Post Reply
3366 posts