Up in the Frozen North, skinny dogs got coats for lead walks and very wet walks - if we then went off lead coats came off for running, back on again for cooling down - in the west midlands its only for really dire weather and dogs with either rubbish not waterproof coats or kel wears one to cover her hips/arse due to her arthritis if its REALLY windy as well as cold or wet, as shes best if not allowed to get cold..

Rocky dog rarely wears a coat up until last winter as he was not a skinny dog and had a perfectly adequate waterproof coat, he'd choose to swim in rivers and lakes all year round so I wasnt worried about him. Now he is arthritic and wobbly he will wear his more..

Errol has his own thermal jacket, he occasionally wears a trouser suit of waterproof material but absolutely no insulating properties at all just becuase I cannot be bothered to wash him after every walk!

Mine both wore coats through the winter as puppies and both have coats incase they're ill. But Ted needs it to drop below about minus 5 before he needs a coat provided he's moving around. We'll see with Ella but she's double coated too so I suspect it will be similar. I always find it quite remarkable when I see large dogs (very thin coated breeds and elderly statesmen to one side) in coats whilst my chihuahuas are running around "naked"

this winter will just depend on how cold he seems but probably not often as he likes to run a lot.

Our previous dog (westie) did have a coat but seldom wore it as it made her walk funny - she was in between sizes and she didn't like the feel of it on her tail. In her old age she did have a jumper in winter even indoors sometimes as she shivered a lot and the jumper helped.


My vent of the day started with a woman at the park who approached us with her young playful golden retriever who got close enough to make Laufey 'hyper' (her word) which lead to a disagreement with mum when I got in - she thinks people are allowed to come say hi to us and if he doesn't interact he's never going to be able to. However, I'm firmly of the opinion that people shouldn't just randomly approach us without at least asking, and I make myself look as unapproachable as possible with earphones in (low enough that I can still hear perfectly and hold a conversation without it interfering) and yet no one seems to respect that. I think my best response so far was when I took laufey out of the way of a staffy and his owner said he was okay to which I replied mine wasn't so good which he accepted.
http://forallthatyoucantleavebehind.wordpress.com
Top

Jasper has a coat for if it's cold and wet - with his sparse coat, pretty soon the rain is effectively going straight onto bare skin, which can't be nice when it's icy. He also occasionally wears the coat if it's really cold - but with very little hair and no body fat I think he appreciates it.
Jasper, lurcher, born December 2009
Top

My Caribbean native Chance-dog flatly refuses to go outside without his sweater if it's cold out. Needless to say, visits to Ohio for Christmas are a bit of a shock to the poor guy.

I would love to see a photo of that! 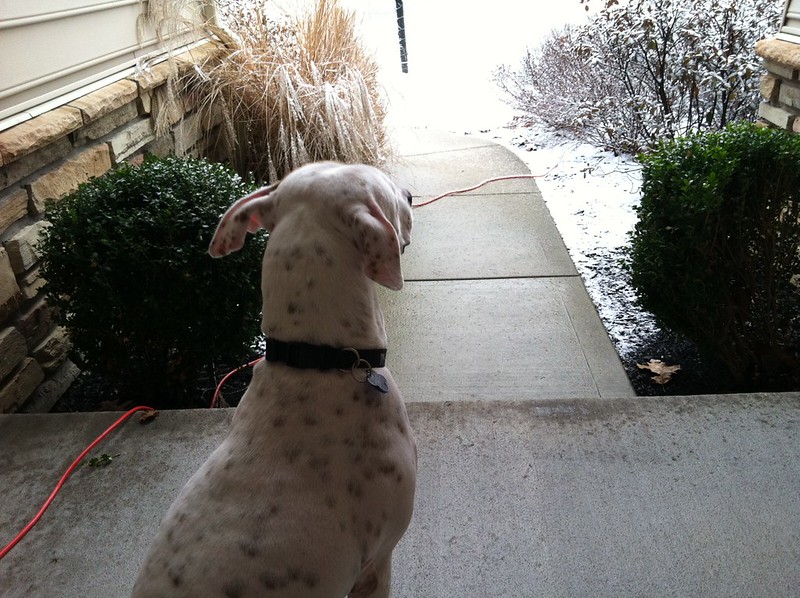 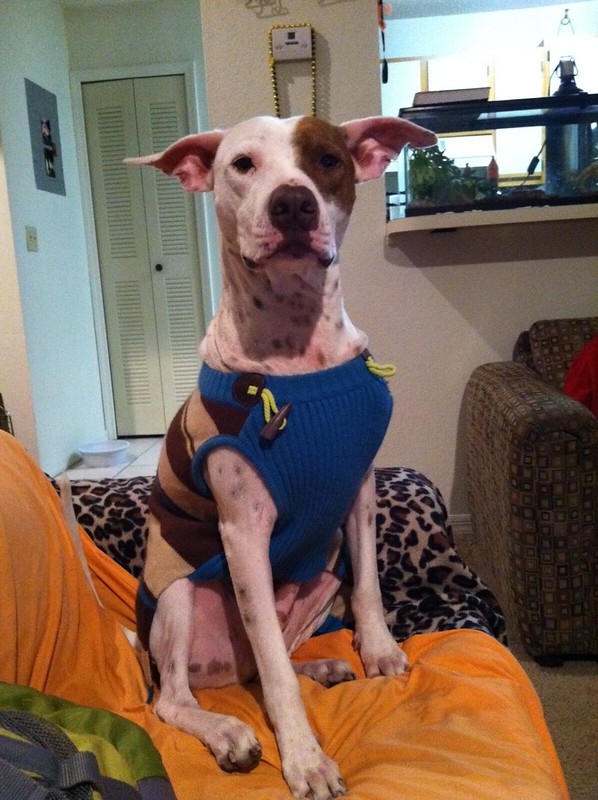 His face in the seond shot! That's truly priceless. I love the way you put the two pis together, I think I love you.

I agree about the expression. Doesn't look too happy. !

I just wish Sandy would wear a sweater or jacket. When we put one on him, if he lets us without growling, he spends all his time outside trying to shake it off! He does the same with his harness. So, walks are two steps, shake, shake, shake, two steps, then shake, shake....

Perhaps, if we had him from puppy time, we could have trained him to wear a jacket. Even Albuquerque gets cold being high desert at 5000 ft elevation. And we do get a few inches of snow. And, still cannot get Sandy to wear a jacket.

As Jacksdad said about Jack, Sandy is a nudist. I wonder how cold it would have to get him to wear a jacket?

I have used the tricks with treats to try to get him to like his harness, and still hates it. So, I dont know if it would work to get him to wear a jacket.

And we hit freezing here in Maine, yesterday. Sandy loves the electric heater and will let us cover him with blankets, but no sweater or jacket. And, I used to have a book to make sew jackets and other items for Sandy, maybe if I made him something that fit properly, he might, just might wear it.

I met a girl at a coffee place who is a Mainer and has a chihuahua puppy. Hopefully, she will train him to wear a jacket.

This is more Chance-dog's forte: 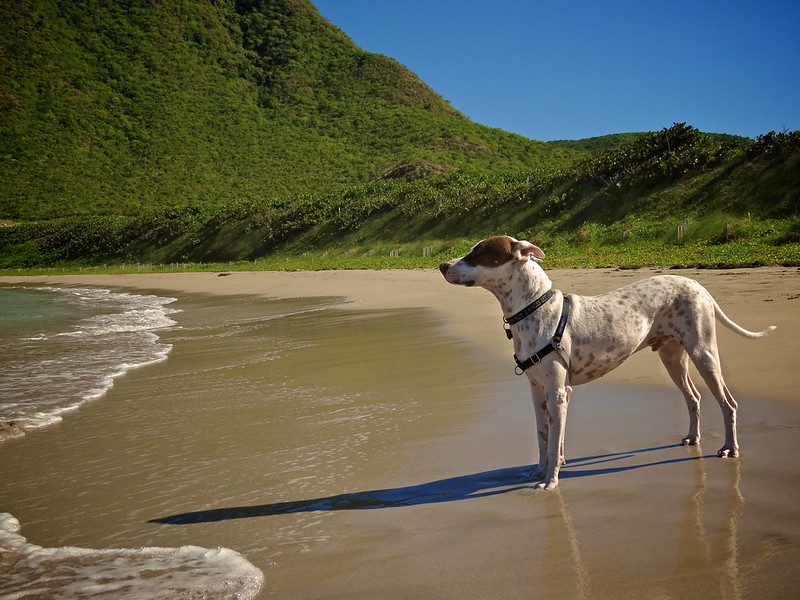 I can't say I blame him, I hate the cold!

On an unrelated note, Chance got bit in the face yesterday by a westie

. I live in an apartment neighborhood where pit bulls aren't allowed, and my pit (sorry, hound mix) gets nailed in the face by a little westie. Seems totally fair, right? He didn't react at all, surprisingly, just sort of backed up, sat down, and looked up and me. Fortunately, a cousin of mine who who rents properties has the PERFECT house that will be available for rent at the end of October, and she's willing to overlook my dogs' breeds and drop all pet-related fees for me. So I am OUTTA the neighborhood where I constantly have to look over my shoulders to make sure no one knows what my dogs are.
Top

He looks very houndish to me, and very handsome.

Grammy to Sky and Sirius, who came to live with me, stole my heart, and changed my life forever as I took over their care and learned how to be a dog owner.
Top

I know, isnt it weird that they ban pitbulls, yet people overlook the fact that properly trained and taken care of, they are loyal and loving.

What great restraint he showed with that Westie. Kudos for him and your training.

Our "deer" chihuahua, probably fear reactive, tried to attack a pitmix in puppy class as well as other dogs. We have to be hypervigilent as he has attacked a full grown husky, and at a motel, slipped out of his collar and attacked a poodle. The only way I could get Sandy back was to tell the poodle owner to leash his dog, pick it up and get out of eyesight. Only then, was I able to get Sandy under control.

It will be great to rent the house from your cousin. It will be much more relaxing. How close are the neighbors and is it fenced in? Be careful and keep talking about your hound mix as who knows how some neighbors can get.

We nearly had a run in with one neighbor's dog, a boxer, last year. OH was taking Sandy for a walk when he did the houdini thing and slipped out of his collar. Turned out the boxer, Daisy, being female, just put up her paw and knocked Sandy to the ground, kind of like a mother with puppies. And, Sandy was well behaved with her since.

But, the male dogs in the neighborhood, gets Sandy riled up. One was on his property and OH and Sandy were in the street and still their Jack Russel came running full bolt. His owner couldnt keep up and he didn't respond to any commands. OH picked Sandy up and thought for sure the JR was going to attack his legs. Thank goodness he didn't.

I agree, that Chance is handsome. But, I dont know much about breeds so couldn't tell you what he is. His stance is proud!

I think his expression with the jumper on looks more royal... it's fabulous!

I agree that most don't know breeds, and as his body isn't massively muscular I would tell people he's a boxer hound mix if I were in your shoes. He's exceptionally handsome though, and I'm not a massive bully breed fanatic. Yay for having a more accepting place to move to as well! Good luck with the move

He's not as big as most of the nasty looking T-Rex pit bulls out there. Chance is a "game-bred" island pit bull (bred for fighting), so he's leaner and thinner. Pictures don't tend to do him justice, he actually is quite muscular. 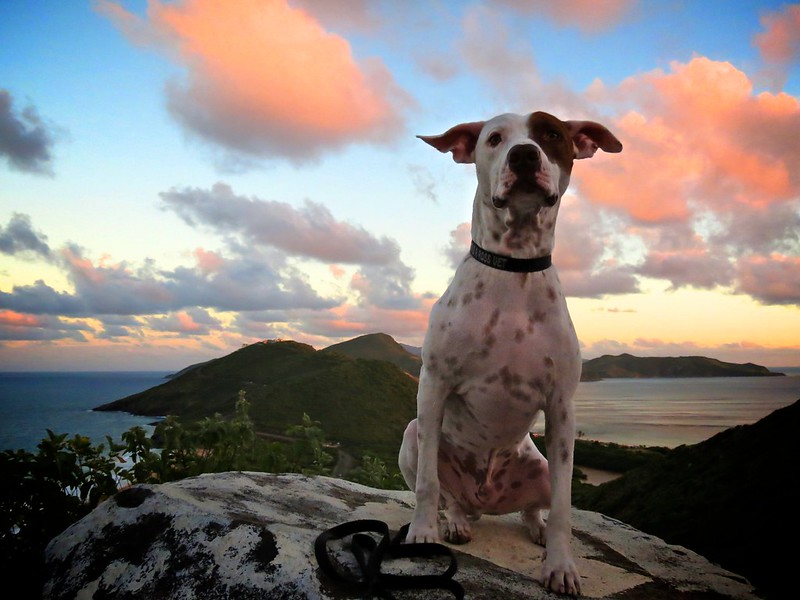 Not much sadder than a totally broken working bred border collie......
Oh wait - there is - there could be a family with 3 of them.
All girls.
Close in age (2 litter sisters)
Scrap regularly.
All in choke chains, and electric bark collars.
Stressed beyond belief and walked 20 mins a day, if that.