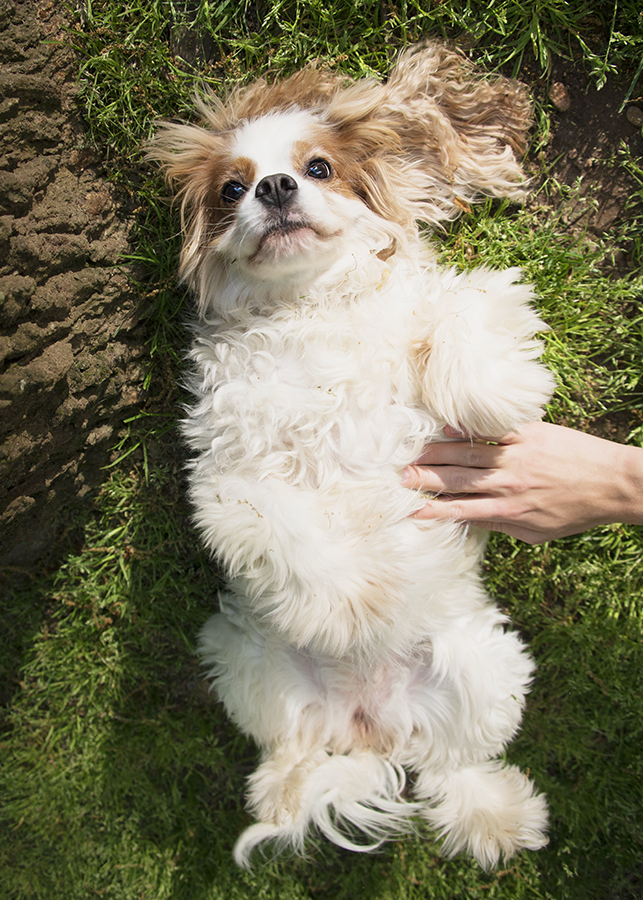 It is vital to habituate a puppy to human touch as soon as the puppy is born. A new pup relies on touch to find its mother, to stimulate milk flow for feeding, and as a source of comfort. Mothers in turn lick and nuzzle their puppies from birth, improving the puppies’ circulation and encouraging them to eliminate waste in order to stay healthy.

Touch helps form emotional bonds between Mom and her pups, which must then transfer to humans. It is really important that a puppy experience human touch from birth to promote a human/canine attachment and encourage the puppy’s ability to develop social attachments with people as it grows.

How to Start Habituating your Puppy to Human Touch
Make being touched a pleasant experience for your pup. Be gentle and aware of how tight you are holding her and the way you are stroking her. Sometimes a touch that is too light might tickle while stroking too hard might hurt, so always look at how your puppy accepts this touch. Does she stay and ask for more if you stop stroking her, or does she walk away? Does she growl at you or lick your hand? The way she responds to your touch will indicate how she feels.

Automatic Defense Reflex
Puppies have an automatic defense reflex when a hand comes towards them or extends over the head. When a puppy is very young, this reflex is not under conscious control, so it is vital to desensitize the puppy to accept being touched by an approaching hand and to have people lean over them as they do so, as a leaning position can be threatening.

Target or touch training (teaching a pup to touch a human hand with her nose) and pairing an approaching hand over the head with something that the pup likes, helps build a positive association with the action and body position.

This is one of the most vital social lessons a puppy can learn because human invasion of space and the ‘hand over the head’ scenario is going to happen many times throughout her life.

My Puppy Growls When Being Handled
If your puppy growls, snaps or bites when she is being handled, she might have a touch sensitivity issue, feel pain or not like the fact that you are preventing her from indulging in a certain behavior she likes. Take her to the veterinarian to rule out any medical issues she might have and if she is cleared there might be a more significant behavioral issue to address. Limit the amount of times you handle her and pair handling with something she loves like a game, toy or some food. Give her plenty of praise. Gradually build up to the point where she is more tolerant to touch, but don’t go too fast and to avoid irritation, redirect her from the activity she likes doing first before picking her up.