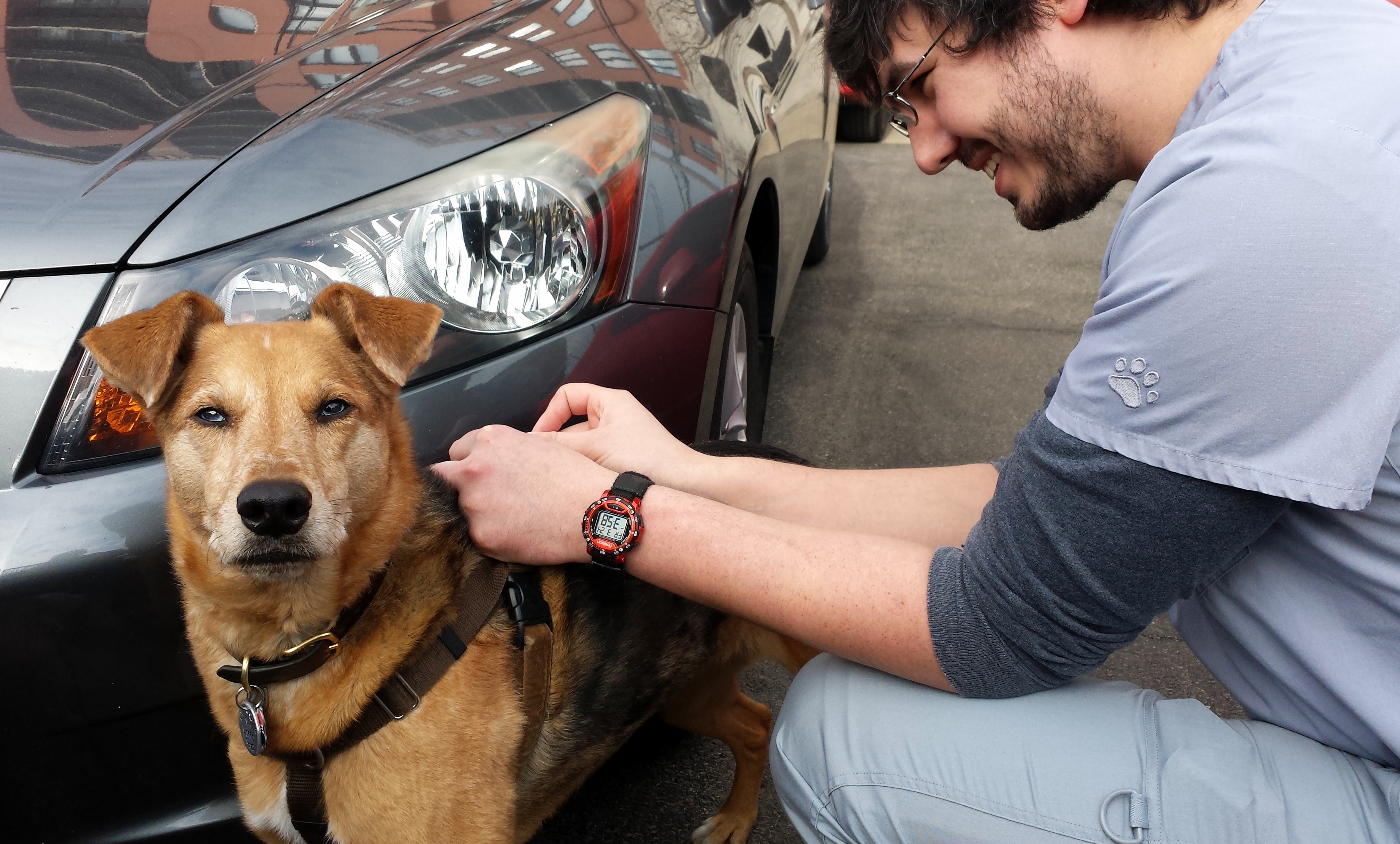 Our dog, Ethel, getting the vaccine for the canine influenza virus.

Chicago is the Windy City, the City of Big Shoulders, the Second City, and now, apparently the dog flu city. The canine influenza virus, or dog flu, settled into the Chicago metropolitan area about two months ago. Since dogs do travel, however, it's no surprise that the virus has popped up elsewhere in at least eight other states. Chicago, however, remains the only hot spot, at as of now. Is this a matter of luck? Or will the dog flu eventually settle in somewhere else?

According to Dr. Donna Alexander, Cook County Administrator for the Department of Animal and Rabies Control, well over 2,000 dogs have been sickened as a result of the flu, and at least six have succumbed. She calls what's still occurring in the area an epidemic. Also, the dog flu has now infiltrated several Chicago area animal shelters. The good news, though, is that over all, finally there seem to be fewer cases of flu.

I've received many dog flu questions (at [email protected]). Alexander and others kindly agreed to answer some of your queries:

Q: How did the dog flu get to America? It seems we need much tighter restrictions on dogs entering America, even if it is for adoption. And frankly, don't we have enough dogs here to adopt? -- C.J., San Diego, CA

A: Currently, dogs are required to have a veterinary certificate of "good health" and proof of a rabies vaccination to enter the U.S. Indeed, that good health certificate is vague. In reality, veterinarians in some countries may have different standards than those in America.

Many argue that we should set the bar higher for dogs entering the U.S. Others suggest we should even quarantine such dogs for a set number of days or weeks. The problem is, there's currently no space or funding for quarantining dogs (or cats).

I suspect the reason you ask this question is because the flu strain now hitting the Chicago area is from South Korea and China, and has never been seen before in the U.S. The assumption is that a dog rescued from that region arrived carrying the flu bug. However, it's also possible that a U.S. military dog brought the virus in, or even a person, since the virus can live on shoes or a pant leg for a day, or potentially even longer.

Personally, while I understand your point about saving dogs that are already here, I believe that a life saved is a life saved.

Q: We go to a large dog park, but our dogs rarely see other dogs there. Since my dogs seldom interact with other dogs, is there still a risk of flu? -- C.H., Deerfield, IL.

A: "Yes, there is some risk," says Alexander, as the virus can live on objects in a dog park, such as sign posts, fire hydrants, and potentially, even grass. However, as long as your dogs don't interact with other dogs, the risk is minimal. Alexander adds that the risk factor is far greater where dogs directly interact nose to nose.

A: It's been reported in Asia, where the H3N2 strain of the dog flu came from, that cats have been sickened. According to Asian sources, cats don't get as ill as dogs.

"So far, there isn't a single verified (case of a) cat who's come down with the dog flu in this country," says Dr. Jill Lopez, senior Specialist Drug Safety at Merck Animal Health.

Q: Would the virus affect any results from blood chemistry? I'm wondering about this because one of my dogs was coughing recently at the same time we ran tests for possible kidney failure. -- J.D.O., via cyberspace

Q: Can you outline the dog flu symptoms? How long should I keep a new dog isolated from other dogs? Is seven days sufficient? I presently have a new dog from animal control. We kept her separate for seven days. It's now the eighth day (since her arrival) and she has a choking type of cough. Is that a symptom? -- M.T., Lincolnwood, IL

A: "The only findings we've seen in the influenza-induced pneumonia cases is an elevated white blood cell count on CBC (a simple blood test, complete blood count)," says Dr. Natalie Marks, of Chicago.

A diagnosis of dog flu is also based on symptoms which may be any combination of coughing, wheezing, lack of appetite, general depression and/or a fever. Now there is a specific test, from diagnostic lab IDEXX for the new strain, referred to as H3N2.

Before symptoms occur, dogs can shed or spread the virus for seven to 10 days, according to Hahn.
Q: Will there be an H3N2 vaccine in America, and if so, when will it be available? -- J.V., via cyberspace

Q: Will the dog flu die out, and then there will be another epidemic in another large, urban area? -- C.D., New York, NY

A: Pharmaceutical companies are investigating the effectiveness of the vaccine for the H3N2 flu that currently exists in Asia, and are rushing to create a similar vaccine here.

The million-kibble question is, will we need such a vaccine? For starters, it might turn out the current vaccine for the strain of the dog flu historically seen in the U.S., H3N8, may offer adequate cross-protection. However, most experts feel a vaccine specific for H3N2 would make more sense. Of course, if the existing H3N8 vaccine offers little or no cross protection, a vaccine for H3N2, the current strain making dogs sick, will definitely be needed.

Unfortunately, vaccines take time to develop and must then earn government approval. Meanwhile, the current dog flu virus might settle in and around the Chicago area, becoming endemic, or ever present. If that occurs, an effective vaccine will be desperately needed or more dogs will die.

It is possible the H3N2 virus will dissipate on its own before a vaccine is released, making its development less urgent. Of course, if the dog flu does diminish in Chicago, it might find a hot spot in another city.