You Can’t Duct From Social Media! 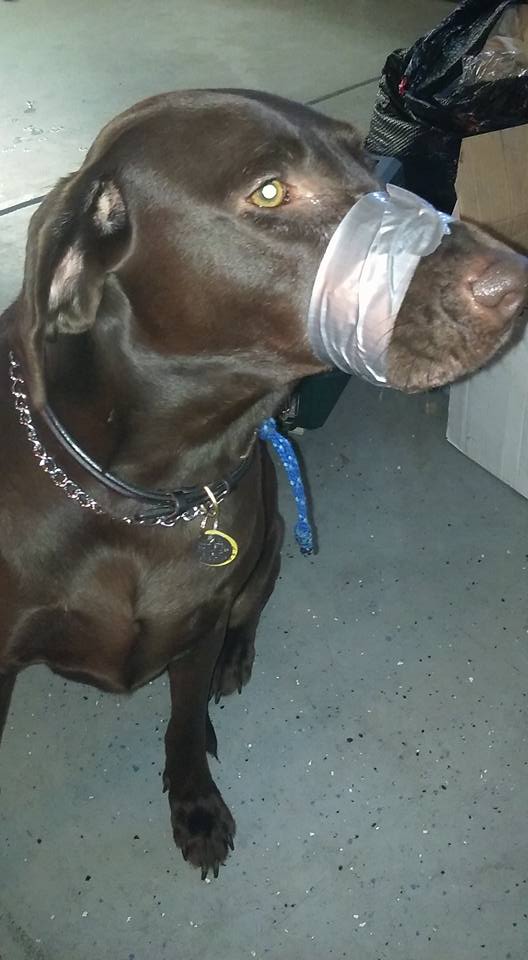 It never occurred to me that I would have to entertain the thought of writing a post with this subject in mind. But the world changes on a daily basis and sometimes that change is not for the better. Things that were unacceptable in the past become more acceptable and thankfully, also vice versa. In this case, fortunately, most people found this action unacceptable and justice has thus far been served. However, in the wake of the mass attention that followed, there appeared to be a small group of people who think that almost anything goes with regards to how they treat dogs they profess to love. What am I talking about?

The recent internet sensation of a woman duct taping her dog’s snout closed for the infraction of barking, of course. The whole Facebook world of dog lovers joined forces to express horror and concern about this incident. There were literally thousands of shares of the post and inquiries into various (thought local to her) authorities. Family members of the woman in question as well as the woman herself defended her actions, saying the dogs are loved and that “it was only for a minute”. Second or minute, it matters not. What matters is that someone thought that this was acceptable at all. What matters is that it even entered someone’s mind as an option.

Several copycat attention seekers took to Facebook after the furor to tape their own dogs snout’s shut, a notable one in a video that was quickly pulled by the person who created it. But not before many people saved it for proof. It was noted by this copycat, that tape pulled slowly and gently off in the direction of the fur’s growth was not painful at all. Hogwash! Anyone who has ever accidentally caught their skin on duct tape when using it for a far more appropriate purpose can attest that it sticks well, which IS it’s design. There is no gentle way to pull off duct tape. Add fur to that equation and the pain is increased.

Dogs don’t have the ability to say, sure, wrap me up with that duct tape. Even if they did, I am willing to bet my career that it would not be an option they would choose to participate in. It would scary. Even for the most stable temperament of dogs.

Scaring your dog is not how you treat an animal who entrusts his or her life with you. Dogs use their mouths in very different ways than humans do. We both breathe through our mouths and noses, but many dogs take in more oxygen through their mouths than humans do. This is especially prevalent in dogs who prefer colder weather. Dogs also need to pant to sweat. Imagine how you would feel if you were hot and could not release sweat?

Are there worse ways to harm a dog? Certainly, and those who spend their lives helping the victims of heinous abuse such as shelter workers, rescue volunteers, humane agents, etc. have all been exposed to far greater atrocities. But that doesn’t eliminate this action as abuse. They are both abuse and both should be actionable by law. Serious abuse starts somewhere and that somewhere is often what someone thinks is an innocent action. A line is crossed. The only move is forward for greater effect.

Fortunately, the internet also tells us that not only has the original perpetrator been charged, but so have the copy cats. Good for the authorities in each person’s location for taking the time to do this. Thankfully, in most areas, crimes against animals are being taken more seriously, as they should be.

Lest we forget Caitlyn, who was seriously injured when she was similarly taped, albeit for much longer time frame, here is her story. Thankfully, she survived.

Behaviorally, there are far greater ways to address inappropriate choices by dogs. In this case, the dog’s infraction was barking. First and foremost, set them up to succeed by taking the time to provide sufficient physical and mental stimulation for your dogs and you prevent boredom. Trying to teach a dog a lesson about barking by duct taping his mouth is futile. It teaches nothing but the fact that you are scary sometimes. Not a great lesson to be learned. A better option would have been to provide something yummy and time consuming to chew on.

The best twist that came out of this whole situation was a young man who photographed his Rottweiler being offered a peanut butter stuffed bone, with the caption that “this is what happens when you won’t shut up”. Win/win for both sides of the equation.

Choose kindness and compassion over anger with your dogs. They depend on you. And when you see abuse on any level, take the time to report it to the proper authority. In this case, the reports were numerous. That may not always be the case so that dog you think is being mistreated may only have your eyes and mouth to count on. Do something rather than expecting someone else to.

Here is some information on how to report abuse.

One thought on “You Can’t Duct From Social Media!”