Home >> Positively Contributors >> Why Does My Dog Eat Everything?

Why Does My Dog Eat Everything? 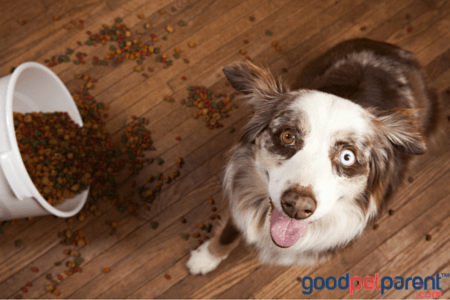 Have you ever wondered why our dogs sometimes resemble canine vacuum cleaners, “hoovering” up everything on the ground (or the table, or the counter, or…) without showing much hesitation or taste discrimination? Perhaps your dog constantly acts hungry, always begs for food, counter-surfs, or has been caught raiding the garbage can (or worse yet, the cat’s litter box). It seems like dogs are always ready to eat, anything, anytime, anywhere – even after a full meal.

Before you’re tempted to chalk up your dog’s behavior to simply being gluttonous, here are a few scientific explanations for why dogs act this way.

Dogs Explore With Their Mouths

Like human babies, dogs explore their environment with their mouths. As puppies, they’re born blind and deaf, so their mouths, noses, and skin are their only means of taking in sensory stimuli.

As dogs get older (and become aware of the fact that they don’t have the benefit of opposable thumbs like their lucky humans), their mouths allow them to grasp and pick up things they are curious about. This can become a big problem if the thing they happen to be investigating isn’t meant to be eaten! Luckily, many smaller inedible items are often unceremoniously passed in the stool, so many times we’re completely unaware of our dogs’ little dietary indiscretions.

Our dogs’ wild ancestors had the ability to eat whatever was available and flourish. Dogs are omnivores, meaning they eat both meat and plant foods. Thousands of years ago, their ability to scavenge is what eventually led to them to form mutually beneficial relationships with humans. Humans produced garbage, and lots of it - and dogs thrived on it. It was easier, and much more energy-efficient, to scavenge than it was to have to hunt something down and kill it.

Even though we now feed our dogs high-quality, palatable food on a regular schedule, this instinctual behavior is still alive and well in them today.

Wild dogs knew that consuming food was always a “feast or famine” situation. When the pack was lucky enough to successfully kill prey, they ate as much as they could in one sitting because they knew it could be days (or even weeks) until they found another meal. They also knew that they couldn’t walk away from food, because chances were good that it wouldn’t be there waiting for them when they got back.

Dogs are also natural hunters. So even if your dog has just had a big meal, he may still get a thrill out of “hunting down” that errant potato chip you dropped behind the couch.

Eating Out Of Boredom

Like humans, dogs tend to eat when they’re bored. And due to the aforementioned lack of opposable thumbs, they can’t just open the freezer for a pint of Ben & Jerry’s whenever the mood strikes. That’s one of the reasons why dogs who are left unattended sometimes raid garbage cans or litter boxes. They love to sniff out new things to explore, and if they find something that happens to be edible, too? Bonus!

Medical Reasons For An Insatiable Appetite

Instinctual behavior aside, it’s important to know there are also certain medical conditions that can cause a dog to feel hungry all the time. This condition is known as polyphagia.

Polyphagia can be caused by the onset of diabetes (since a diabetic dog’s body cannot regulate its own blood sugar levels), hyperthyroidism (an overactive thyroid gland), Cushing’s disease (an endocrine disorder), or the presence of intestinal parasites. It can also be caused by malabsorption syndrome, where a dog’s gastrointestinal tract cannot properly absorb the nutrients in food.

If you suspect your dog could have a medical reason for unusual eating behavior, be sure to talk it over with your veterinarian. And if you are suspicious that your dog has swallowed something he shouldn’t, don’t take any chances and call your veterinarian immediately.

So there you have it. Your dog’s penchant for indulging in that week-old, dust-covered garbanzo bean that rolled between the refrigerator and the wall doesn’t show a lack of taste or discrimination…rather, in the words of the immortal Lady Gaga, he was simply “born this way.” 🙂

More about Camille More Articles from Camille
JOIN THE CONVERSATION

5 thoughts on “Why Does My Dog Eat Everything?”