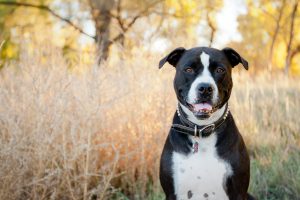 Imagine sitting in study hall, cramming for your math final the next period. You’re focused. Determined. Then, the boy behind you starts smacking his gum. You need to learn these equations! You try to shut out the noise, but then he starts tapping your shoulder with his pen. You whirl around – it was an accident, he says.

He gets up, smacks his gum as he passes your desk. “Whoops,” he laughs, knocking your math notes to the ground.

Or, it’s the biggest basketball game of the season. The score is tied, and you’ve been fouled. You step up to the line. Take your stance. Bend your knees and lift the ball. You line the shot up, and just as you’re about to release, your friend yells from the sidelines, “Hey, those shorts make you look a bit chubby!”

In either case would anyone fault you for shouting at your aggressor? Of course not.

Yet, we forget that dogs have the same types of buttons that can be pushed too many times. Many people think that dogs who attempt to bite are aggressive by nature; the reality is much different.

All dogs can bite. According to the American Veterinary Medical Association (AVMA), “Big or small, male or female, young or old, any dog can bite. Even the cuddliest, fuzziest, sweetest pet can bite if provoked. Dogs bite as a reaction to something.”

Consider this: You and your dog are enjoying a beautiful day in the park. An unsupervised kid runs from around a tree and whacks your dog in the back with a stick. (Incidentally, this actually happened when we were working with my reactive dog in the park!) Most dogs would probably whip around and give that kid the eye. Many would growl. A few might snap.

Or, a complete stranger picks up a foster dog with an unknown history in an unfamiliar place. She meant to cuddle, but the dog was uncomfortable, unsure, and surrounded by strange people. The dog snaps and makes tooth contact. A moment later a second person picks her up to see if it happens again. Of course it does.

Of course, the degree of the stimulus affects the degree of response. Some dogs fly off the handle with tiny provocation – just as some people snap when they get cut off in traffic. Other dogs can stay calm in the face of obnoxious provocation. In our example, your reaction to the gum-smacking boy could range from ignoring him to telling the teacher to hissing at him to stop to punching him. Ignoring him isn’t a strong enough reaction; punching him is too strong.

Our job as the leash-holder is first and foremost to prevent the provocation in the first place. That’s the ideal, but real life doesn’t allow prevention – hello, unsupervised, stick-wielding kid.  The second most important step is to identify the signals dogs give to say they’re uncomfortable. Watch for signals that show a dog is scared: lip licking, avoidance, stiffness, and so on. And definitely monitor for any warning signals like growling or bared teeth. When you see those signals, stop whatever you’re doing. Don’t repeat the behavior to see if it happens again. Instead, allow the dog space to settle.

Maggie Marton is an award-winning pet journalist who focuses on the animal-human bond in her writing and her advocacy. She is a freelance writer and the founder of the popular dog blog "Oh My Dog!" She is also the author of "Clicker Dog Training: The Better Path to a Well-Behaved Pup."

More about Maggie More Articles from Maggie
JOIN THE CONVERSATION