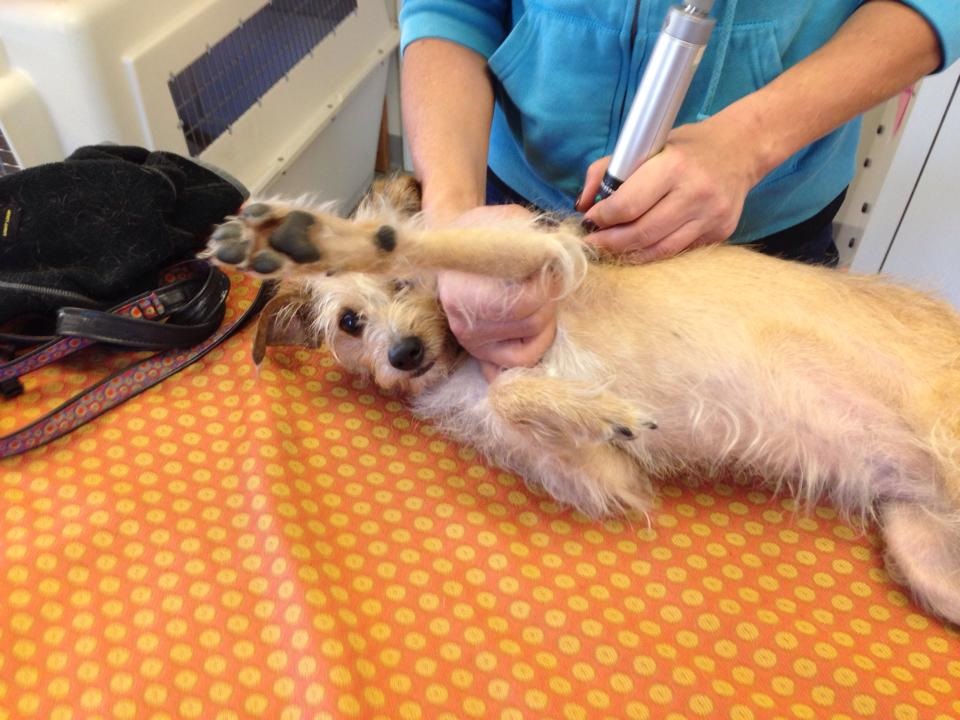 Tricky is being worked on for a sore muscle.

About nine months ago, I was facing behavior issues and medical concerns about my dog, Marvel. As a result, my trainer brain was on overdrive. One of the things I was thinking about is whether his reactivity (aggressive behavior towards people and dogs) was a behavioral issue, rather than a medical issue.  And if so, was there anything I did to contribute to it.

As a trainer, and a terrier owner, I distinguish petting as different from handling. Petting is about stroking the dog in a way that is pleasurable for the dog. It’s often solicited by the dog in some manner. Handling is different. Handling can include: inspecting the dog, manipulating their body parts, and moving the dog physically. Examples of these handling maneuvers can include baths, vet examinations, grooming, inspecting for ticks, putting on clothes, pulling the dog off the couch, picking up and moving a dog from one spot to another, picking up a dog and holding him in your arms…you get the picture. It’s often NOT solicited by the dog nor enjoyed by the dog.

There is something many of us in the dog training field call SDS, “Small Dog Syndrome ”. It’s the sassy-ness and ‘bad attitude’ that people believe small dogs can have. It’s not a real thing–but rather a way to label the possible result of what many people, including myself to some degree, do to small dogs: things  that they would not do to a large dog, such as an 80 pound Rottweiler. Small dogs are often physically managed and manipulated against their 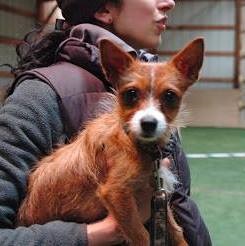 Marvel in my arms after I cued him to jump up.

will simply because of their size. This can create frustration in the dog and/or distrust of hands reaching for them. This can result in an aggressive display by the dog when he or she feels ‘invaded’.  Not all small dogs feel this way but in my many years as a dog trainer, I have met many dogs who do.

Although I had been good about not letting strangers reach for Marvel and pick him up, my husband and I had been guilty of doing this. I put clothes on him when the weather was cold and he doesn’t like to wear them--I’ve done some work so that he does tolerate it. So even though these are not huge things, they could become completely intolerable when the dog is in pain. Perhaps this is what happened with Marvel this past January.

Some of the things I have done so that I don’t have a dog struggling with “SDS” are:

There is so much more to living with a small dog and how to prevent them from becoming aggressive to handling--these are just a few things I have found to help my 7.5 pound terrier.

Clarity & harmony…a better way of living with your dog.