Home >> Positively Contributors >> In Hollywood with Victoria at the Genesis Awards–Airs Saturday, 4.30.11 on Animal Planet

In Hollywood with Victoria at the Genesis Awards–Airs Saturday, 4.30.11 on Animal Planet

Victoria and her show were honored by Hollywood at the recent Genesis Awards. The awards air on Animal Planet Saturday night with an encore on Sunday. It took place on March 19, 2011, in Beverly Hills on the Avenue of the Stars... and I was there with Victoria Stilwell, star of Animal Planet’s It’s Me or the Dog! The Humane Society of the United States (HSUS) event honors outstanding individuals who have made a significant contribution through major media to raise public consciousness of animal protection issues. The event included a gourmet vegan dinner, a silent-auction, and an up-close look at celebs decked out in their glamorous best. 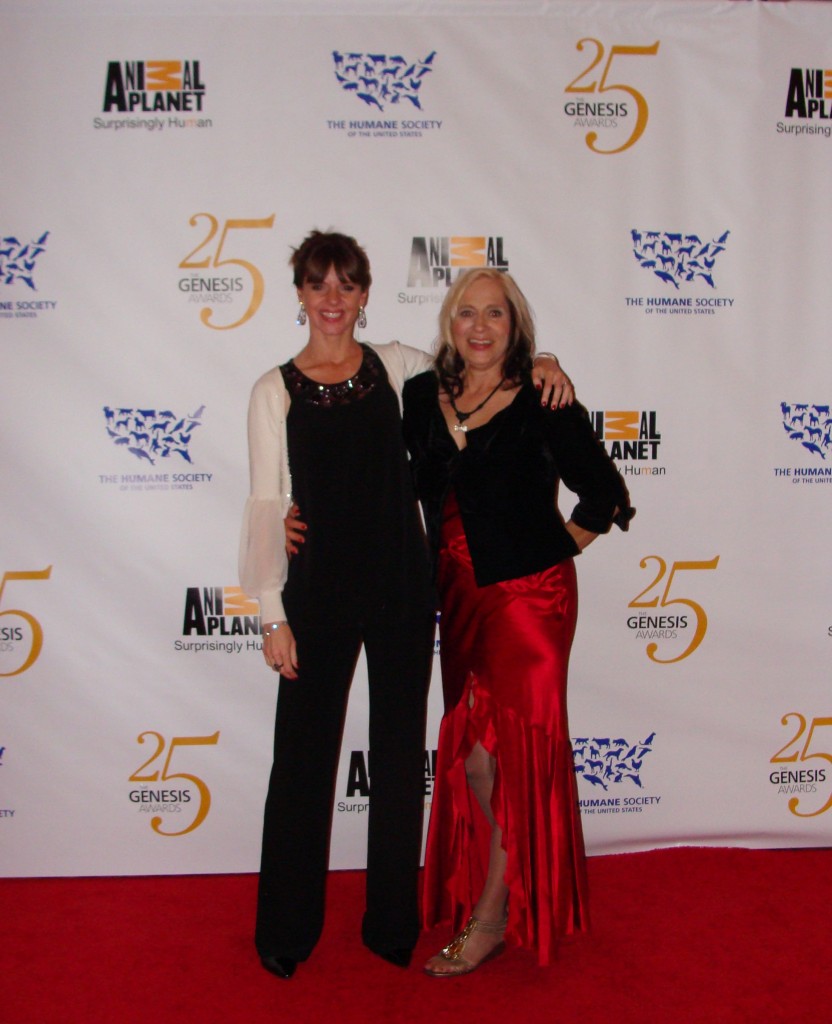 Victoria’s show, It’s Me or the Dog, was nominated in the competitive Best Reality Series category. I watched excitedly as Victoria walked down the “red carpet” and gave me a little wave. Press, TV, radio and on-line interviewers rushed to get their interviews, quotes and footage to further to promote the celebrities who are using their voices as animal welfare advocates. Victoria said: “This award is special because it recognizes the contribution It’s Me or the Dog is making in helping people build more positive relationships with their pets, as well as addressing issues such as pet overpopulation and the importance of spay and neuter.”

This was my first red carpet event and although I didn’t walk it, I did have my photo taken on it during the reception! I could not have been more proud to schmooze with the producers of Animal Planet, gab with Shorty the Pit Bull Boss and discuss dogs with veteran veterinarian, Marc Abraham, author or the new runaway best seller, Vet on Call. Attendees and presenters included: Betty White, Valerie Bertinelli, Ed Asner, James Cromwell (Secretariat), Leona Lewis, Renee Russo, Mayor Antonio Villaraigosa (of Los Angeles), Charlotte Ross (Glee) and Dusty the Dog (True Blood).

Stunning film clips from the highly anticipated release of the IMAX “Born to Be Wild” 3D documentary which follows scientists and rescue teams returning orphaned elephants and orangutans back to the wild were shown. Filmed in the rain-forests of Borneo and the Kenyan savanna this stunning expose debuts in theaters on April 8th. Other clips highlighting animal maltreatment brought tears to my eyes on at least three separate occasions during the ceremonies. 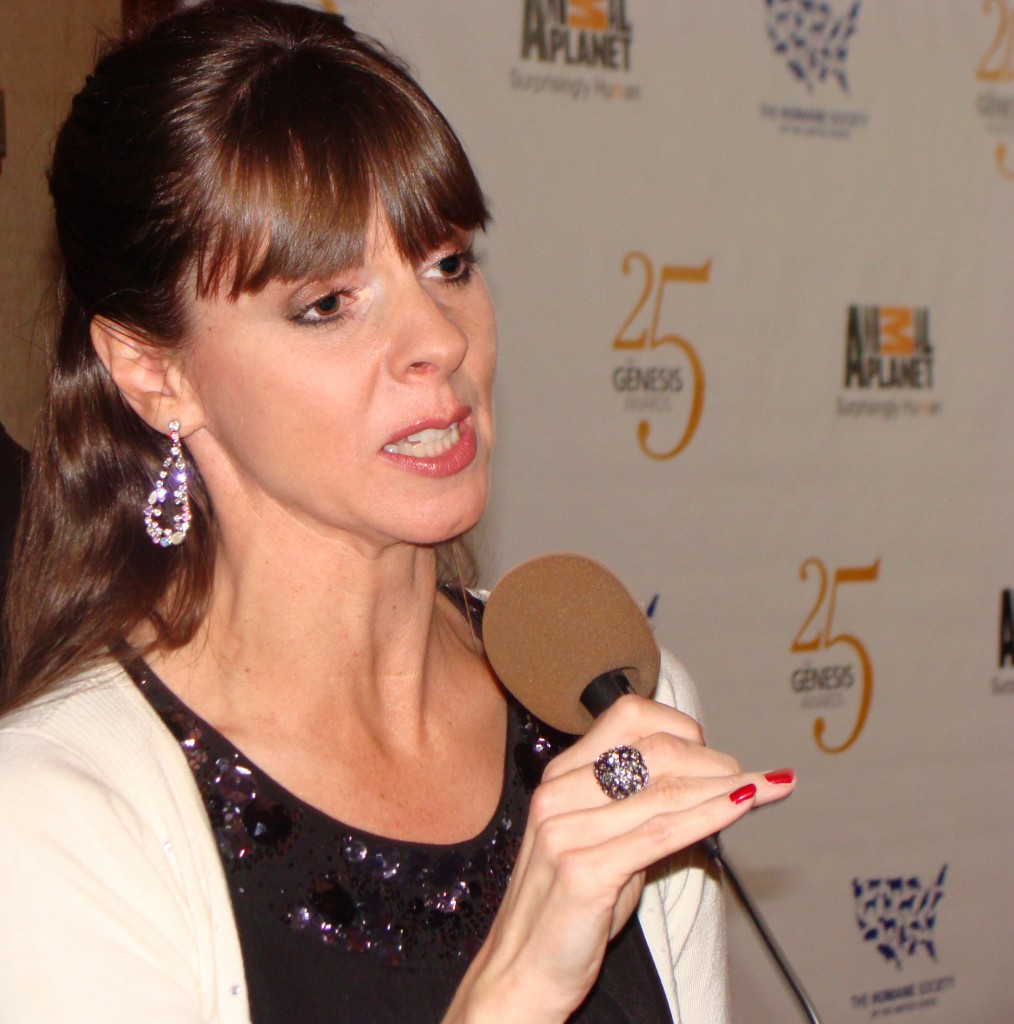 Victoria speaks out about puppy mills on the red carpet.

Kristin Davis (Sex and the City) was chosen for the prestigious Wyler Award, “in recognition of the attention she has brought to the plight of orphaned African elephants impacted by the increase in elephant poaching for their ivory tusks.” said the HSUS.

* How To Train Your Dragon for Outstanding Feature Film for its inspiring message about tolerance and respect for all living creatures.
* Comedy Central's The Colbert Report for satirizing bullfighters.
* HBO's True Blood for a dogfighting episode.
* The Oprah Winfrey Show for two animal-themed shows spotlighting dolphin netting, elephant poaching for ivory, and pet overpopulation.
* Last Chance Highway, Animal Planet, for a look at rescuing, re-socializing and finding loving homes for dogs.

The honor of being nominated and being part of a group of creative individuals who are passionate about exposing and stopping animal cruelty was reward in itself for us. What a night! 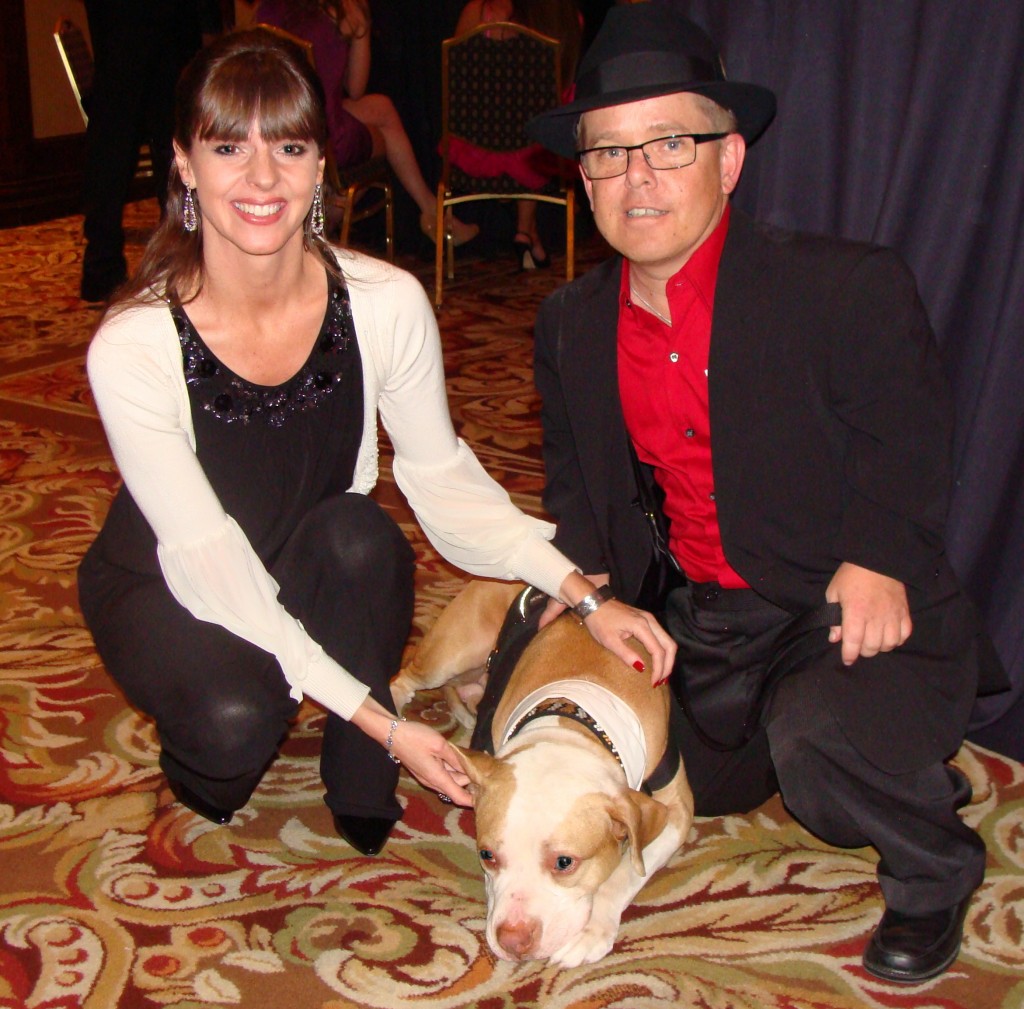 Victoria with the Pit Boss and Hercules. After-party.

The Genesis Awards one-hour special will air on Animal Planet on April 30 at 7pm ET/PT and encore May 1 at 9am ET/PT.

Linda Michaels, “Dog Psychologist,” MA, and Victoria Stilwell-licensed Del Mar dog trainer and speaker may be reached at 858.259.WOOF (9663) or by email: [email protected] for private obedience instruction and behavioral consultations near Del Mar and the San Diego Coast. Please visit us at DogPsychologistOnCall.com

Linda Michaels is a VSPDT trainer, dog training columnist, and owner of Dog Psychologist On Call in Del Mar, CA. Linda holds a Master’s Degree in Psychology with research experience in Behavioral Neurobiology. She is a Behavioral Advisor for the Wolf Education Project (WEP) in Julian, CA and Art for Barks in Rancho Santa Fe, CA.

More about Linda More Articles from Linda
JOIN THE CONVERSATION

One thought on “In Hollywood with Victoria at the Genesis Awards–Airs Saturday, 4.30.11 on Animal Planet”