Veterinarian Who Shot Cat with Arrow Not Charged with Crime 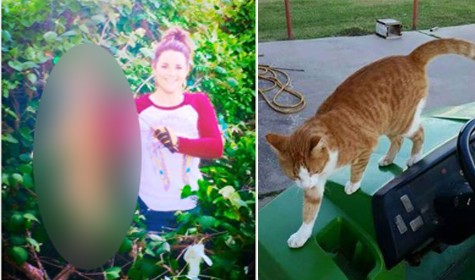 The story made international news when Texas veterinarian Dr. Kristin Lindsey posted an image on her Facebook page of a cat she boasted shooting with an arrow through this headline. Accompanying the image, on April 17, she wrote, “My first bow kill, LOL. The only good feral tomcat is one with an arrow through its head. The vet of the year award…. gladly accepted.”’

It turned out Lindsey reportedly killed an owned cat named Tiger, and not a feral tomcat as she suggested.

What didn’t make headlines was the recent puzzling response from an Austin County Grand Jury, which on June 24 declined to indict Lindsey.

According to a press release issued by Travis J. Koehn, criminal district attorney of Austin County, “The Grand Jury examined all the evidence and determined there was insufficient proof to charge Kristen Lindsey with a crime.”

So, how is intentionally taking an arrow and shooting a defenseless animal not a crime?

I am no attorney, but I can easily answer each of the three points used by the Grand Jury to defend their decision to waive charges being filed.

My comment: Lindsey herself conceded where the incident took place. And if shooting a cat with an arrow through it’s skull isn’t defined as cruel; I wonder what it would take to define cruel. And obviously she killed the cat without owner consent.

2) Grand Jury statement: “Investigators were never able to positively confirm the identity of the cat seen in the social media photograph. Although one witness believes the cat to be a pet named Tiger, three different area residents had fed similar looking cats at one time or another that had no collar and had strayed. Evidence was insufficient to positively identify an owner for the cat in the online photograph.”

My comment: Based on several local media reports, it’s clear the cat shot was Tiger. Even if it was another cat, experts have pointed out (based on where the arrow entered the cat’s head) that the cat was approaching Lindsey, rather than running off – which is what an unsocialized feral cat would surely do. Being a veterinarian, Lindsey should have understood the difference.

Why does it matter if the cat was Tiger? Clearly, she shot an arrow through the head of a defenseless cat. The Grand Jury is suggesting that if the cat is un-owned and feral, the cat has less value, and shooting him is then deemed acceptable. While this could legally be true in Texas, it’s reprehensible.

My comment: This statement is astoundingly ridiculous as well as deceptive.

Here’s what the AVMA says on their website. "We were surprised by the District Attorney’s reference to the AVMA and our Guidelines for the Euthanasia of Animals, 2013 Edition in conveying the June decision of the Austin County Grand Jury in the Kristen Lindsey case. The AVMA was neither consulted nor asked to provide information regarding the case, and we were not aware that the Guidelines would be presented in this way. Based on the statements in the press release, the District Attorney’s application of the Euthanasia Guidelines was seriously flawed.”

The AVMA elaborates on their website why their euthanasia statement is being taken out of context and does not serve to vindicate Lindsey’s actions.

This Grand Jury decision is supposed to have no impact on The Texas Board of Veterinary Medical Examiners review regarding whether Lindsey can retain her Texas veterinary license. Now, I wonder.

The Grand Jury’s arguments are surprisingly superficial and inaccurate. I can’t help but wonder why the AVMA or other experts weren’t consulted. For whatever the reason, it’s clear the Grand Jury just didn’t want to prosecute.

I believe if Lindsey had shot a puppy charges more likely would have been filed, but cats appear to have another standard, particularly if the cat is possibly a “nuisance” stray.

Clearly, Austin County just wants this mess to all go away. It doesn’t mean the same case can’t be elevated to the office of Texas Attorney General Ken Paxton.

Given that millions around the globe saw the evidence, you’d think felony animal cruelty charges would be a no-brainer. There’s nothing alleged about this crime.