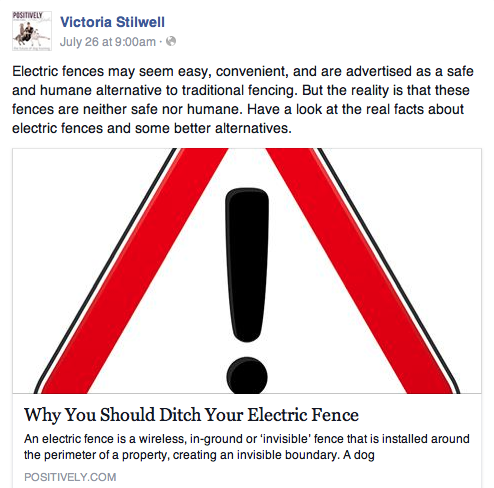 Last week, all links to articles on my website Positively.com were erased thanks to what we understand to have been a coordinated attempt to silence the truth. I had written a comprehensive, well-researched article on the dangers of shock collars and electric fences on my site and linked it to my Facebook page. Within hours, the link had been erased, but it didn't stop there. All links to my website going back for years had been removed not just from my page, but from all of Facebook for every single user. Everything had disappeared and any attempts to link to any article on my site received the same message - that links could not be posted because the content had been reported as abusive by other Facebook users. Anyone who knows me knows that I am not afraid to speak out against cruelty to animals in any form, but I am not abusive.

We don't have definitive proof, but it seems obvious that shock and electric fence advocates reported my content as abusive in an attempt to stop the truth from getting out. If this was the case, despite their short-lived happy time with no voice to oppose them, they ultimately failed. The site and all of its links (including the post about electric fences) have been restored by Facebook after the good people there realized that even their super-smart and well-meaning algorithms designed to protect us sometimes need a human touch to recognize true abuses by fellow users.

Support from tens of thousands of people on Facebook and Twitter combined with our ability to mobilize our amazing Positively team and discuss with the Facebook folks meant that the Positively content was restored. The good news is that the article in question was seen by millions and since last week our traffic to the site and Facebook reach has increased by a significant amount.

People know they get great information from my Facebook page and my site and I will never abuse that trust. Thanks to everyone who stood up for the freedom to speak the truth and not be squashed by powerful commercial entities or individuals that want to cover up the truth and silence those of us who speak out.