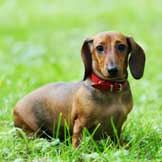 According to CBS Local San Francisco, there have been multiple reports of illness and even death in dogs that consumed meatballs tainted with strychnine, a common ingredient in rodent poison, that have been dispersed on city streets since early July 2013.

Residents of the Twin Peaks and Diamond Heights neighborhoods have been on high alert after the source of the toxicities was discovered, as it’s unclear if all of the poisoned meatballs have been recovered.

Oskar, a Dachshund, died on July 5, 2013, two days after eating the meatball. Dorothy Schechter, Oskar’s owner, saw her dog consume an object (the meatball) from the street during a walk. A short time later, Oskar fell ill. Schecther said, “The next thing we know, he started to seize and his back went up. I grabbed him and went to the vet.”

Another owner, Crystal Maglio, also has a dog that was sickened by the toxic meatballs. Maglio said, “There looked like there was some meat on the ground.  It was just little parts of it and I saw him sniffing it and I pulled him away. It’s likely he ate some of it.” Maglio’s dog suffered vomiting and anorexia (decreased appetite).

Dr. Carey Jurney, the attending veterinarian who cared for Oskar, detailed the appearance of the meatballs as being “ground beef meatballs with green and red seeds in them. That’s the toxin.” Images of the meatballs can be found via CBS's SF Dog Owners Warned Over Possibly Poisoned Meatballs Left On Streets.

The most common forms of rodenticides are anti-coagulants, like Brodifacoum (active ingredient in D-Con), which inhibits the body’s synthesis of Vitamin K and causes abnormal function of the blood clotting cascade. Within one to seven days post-ingestion, the blood cannot properly clot and clinical signs associated with bleeding (lethargy, pale mucous membranes, increased respiratory rate and effort, bruising, tar-like stools) appear.

Other varieties of mice and rat poisons can contain substances that are faster acting, such as Cholecalciferol (Vitamin D3) and Strychnine.

Strychnine is an exceptionally lethal neurotoxin with the capacity to kill both humans and animals. Signs of Strychnine poisoning occur in minutes to hours post-consumption and include:

San Francisco police indicate that the meatballs contain strychnine levels that are potentially lethal to people. Styrchnine can be absorbed through the skin and other points of entry into the body (eyes, nose, mouth, etc.), so impermeable gloves should be used in the handling process. Any person finding suspicious meatballs or other food products should immediately call 911.

The individuals responsible for the placement of the toxic treats evidently had malicious intent, as the locations chosen are those where dogs commonly defecate. The reasons behind this heinous activity are yet unknown; was the intent to injure the dogs whose owners refuse to remove their dogs' waste from those particular elimination areas?

Oskar’s passing prompted Megan Backus, spokeswoman for the Animal Legal Defense Fund (ALDF), to offer a $1,000 reward for information contributing to the arrest of the individuals responsible. ALDF Executive Director Stephen Wells declared that “the citizens of San Francisco are up in arms over this sadistic crime.” The ALDF is now teaming with VegNews Magazine and Yelp CEO Jeremy Stoppelman to offer an increased reward of $5,000.

Please report any information about those responsible for killing an innocent canine companion and sickening another, and creating a panic state among San Francisco residents and visitors, to the police or to the Animal Legal Defense Fund at 707-795-2533, ext. 1010.

Should you suspect that your dog has consumed any poisonous substance, bring a sample of the product, any associated packaging materials, and even your dog’s vomit and feces to an emergency veterinary facility.

Has your pet ever been suspected or confirmed to have been poisoned? Feel free to share you story in the comments section.