Tips For Decreasing Reactivity in a Competition Dog 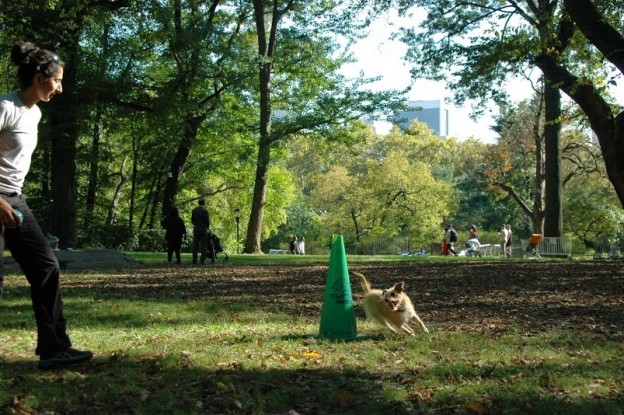 A good behavior modification program includes good management while working to change a dog’s behavior—this involves controlling your environment as much as possible to prevent your dog from feeling triggered, thereby reacting as a result of that change in his emotional state. Management is important because it creates an environment in which your dog has little or no opportunity to practice the behaviors you are seeking to change. Management will help reduce stress in situations your dog would normally become reactive, therefore stop your dog from continuing to practice unfavorable behaviors. If your dog does not continue to practice these undesired behaviors, progress is more likely, and can occur at a faster pace, otherwise you might as well be spinning your wheels in the mud. I'm teaching an online course providing help for people with fearful and reactive competition dogs - in this article you'll get a little bit of insight into what I'll be teaching in the course.

In the competition sport of agility, there are many variables to manage. When I created a behavior modification program for Marvel, here were some of the things I considered to help set him up for success:

Say goodbye to corrections; this includes verbal corrections, not just physical ones. Science today has proof that using punishment to address behavior problems can have potential adverse effects which include but are not limited to: inhibition of learning, increased fear-related and aggressive behaviors, and injury to animals and people interacting with animals. Even relatively mild corrections can increase stress in your dog. Dog trainers and behaviorists today have the tools to reduce stress and anxiety in dogs in ways that promote learning and increase confidence, while facilitating trust in people and dogs. Let’s just do that.

Threshold can also include duration, meaning the amount of time your dog is exposed to the trigger. For example, perhaps seeing another dog ten feet away isn’t such a big deal. But standing there and having a ten-minute conversation with your neighbor who has a dog would put your dog over threshold.

The most effective behavior modification programs create an environment where your dog is exposed to his trigger without over-reacting; this is called sub-threshold. In this course, this is where we will look to be while working with your dog.

I learned about this as a trainer but I experienced it at a whole other level with Marvel in January of 2015 when Marvel was two years old. It was the afternoon on day three of a series of agility seminars and I had just brought him into the training building and put him on a camping chair to wait while we talked about the course. His chair was placed near a heater so folks were hovering around him trying to keep warm. Marvel was barking and barking at everyone and I had no idea why. That was the beginning of when I took a serious look at Marvel’s anxieties and their manifestation into reactivity. In retrospect, I realized Marvel had hit his limit. He was managing being in a new space, people walking all around him, and other dogs in close proximity for two and half days straight. And I was crating him in the building next to the heater so he didn’t really get a break from what I later realized were triggers for him.

Trigger stacking is exactly what it sounds like; it’s stressor after stressor building until they collapse like Jenga blocks. Imagine this: you wake up in the morning to immediately learn your alarm clock didn’t go off because the power died so you’re now late to work; as soon as you jump out of bed you stub your toe rushing to the bathroom; you get to work fifteen minutes late to a meeting with a new client; after the meeting, your boss gets upset with you because you were late; at lunch, you spill your drink onto your white shirt; as you try cleaning it up in the bathroom, you remember you forgot to bring your jacket with you so you can’t cover up the stain during an afternoon meeting with another client; you now spend the rest of your lunchbreak rushing to a store to buy a new shirt; on the way home you get a flat tire; when the tow truck shows up and tells you how much the tow will cost, you scream at him—that’s called trigger stacking. I think we’ve all had those days where mild stressors build up to the point of an emotional explosion. This is what it can be like for your dog every day you take a walk outside; one stressor after another presenting itself until your dog can’t take anymore.

In this course, we will not only identify your dog’s triggers, we will examine the different situations you find yourself in with your dog and work on how to prevent trigger stacking from occurring.