These Three New Dog Breeds Will Make Their Debut This Week 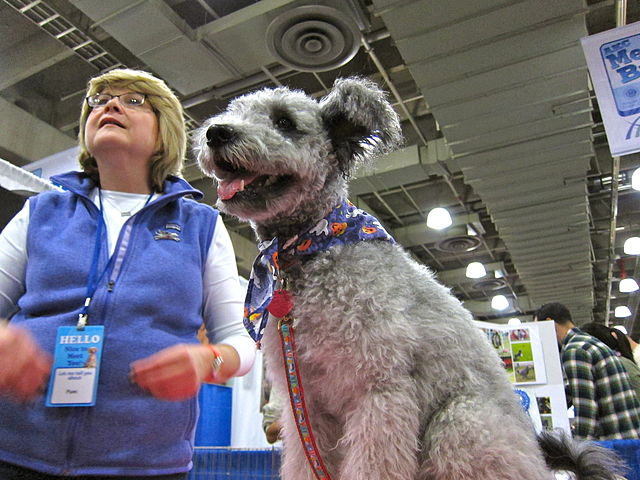 A Pumi, one of the new breeds to be unveiled this week. Photo Courtesy Petful | www.petful.com/

Thanksgiving Day is all about tradition, turkey, stuffing, cranberries and dogs. 2016 marks the 15th anniversary of the National Dog Show. Presented by Purina, it airs on NBC on Thanksgiving Day, noon to 2 p.m. (in all time zones) following the Macy's Thanksgiving Day parade.

With over 22 million people watching last year, the National Dog Show is most viewed dog show ever. The show never had an audience less than 17 million. By comparison, on a good night, “The Voice” garners about nine million viewers for NBC.

No word on how many dogs watch, though perennial announcer David Frei touts he’s always been number one among canine viewers. For 27 years, he also announced the famed Westminster Kennel Club Dog Show. And beginning next Easter, he’ll broadcast the Beverly Hills Dog Show.

“I’ve got the greatest job in the world,” he boasts.

The Kennel Club of Philadelphia hosted its first ‘official’ dog show in 1912, and was elected a member of the AKC in 1913. The Philadelphia cluster of shows has always been a benched dog show; unlike the more common “show and go” format, benched shows require exhibitors to remain in the building for the day. Benched shows allow the public to meet and greet the canines stars. Now almost a lost tradition, only a handful of benched shows remain.

While Frei is considered Mr. Dog Show, his broadcast sidekick, John O’Hurley, is most well known for playing J. Peterman on Seinfeld. He even purchased the company several years back.

Talk about your varied career, O’Hurley has authored books on wide-ranging topics (including dogs), he has broadcast golf on TV; hosted game shows including To Tell the Truth, The Great American Spelling Bee, Family Feud; he starred on Broadway and in the national tour of Chicago; was the first winner of Dancing with the Stars; O’Hurley’s voice can be heard on many cartoons, and was even a guest on the soap opera The Young and the Restless.

O’Hurley says, “Well, I love to do unusual things so I don’t have a unilateral career; I prefer to keep different plates spinning.” He pauses and adds, “But doing the dog show truly has to been a favorite. I love dogs. I hope it shows. Dogs represent the absolute embodiment of innocence. Dogs are God’s reminder that there are angels. Dogs are effusive with their love – and they show it with their eyes.”

Among O’Hurley’s books is “The Perfect Dog.” He says, “I wrote that for my son with a Dr. Seuss style poem describing what the perfect dog would look like. Talk about going full circle, my son – who is now 10 (years old) - reads that very book to young children in schools (to younger children) all over.”

This year’s National Dog Show Presented by Purina will be the debut of three new American Kennel Club breeds:

Last year’s National Dog Show winner was a Skye Terrier named GCH Cragsmoor Good Time Charlie or, as friends just say, Charlie. As for this year, Frei isn’t saying who expects to win, except, “The winner is always that dog sitting on the couch with you while you’re watching the dog show. Your dog is always Best in Show.”