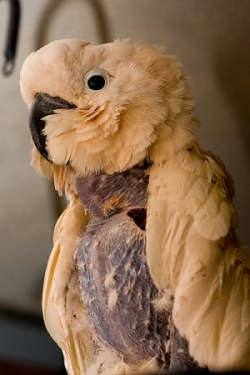 According to a recent study, men think about sex 18 times a day, while women think about it 10 times a day. Should we be surprised that most parrots that are raised in the wild in large very social flocks also are obsessed with sex?

I recently attended the annual conference of the Association of Avian Veterinarians and heard a lecture that looked at just how much sexual frustration underlies many of the common disorders parrots suffer today. Among the most frequently treated problems for which parrots of all kinds are brought to the veterinarian are feather picking/chewing, self-mutilation of skin, dermatitis (skin inflammation), egg-laying difficulties, and aggressive behavior. When nearly 100 female and male parrots of varying ages and species each displaying one or more of these problems had a small implant (the size of a rice grain) surgically inserted under the skin over their backs to slowly release a hormone (Deslorelin) that shuts down the sexual cycle temporarily (for about 3 months), all of them had significant decreases in the problem behaviors they were displaying. When these birds again began to show signs of a problem, generally after about 3 months, many of them received a second hormone implant that again suppressed their abnormal behaviors for a period of months. While not all problem behaviors in parrots are due to sexual frustration, the findings of this study support the notion that a great number of problems in captive parrots have a sexual basis. This is not surprising, as parrots in the wild generally live in flocks of thousands and have the opportunity to mate whenever they want. Many wild parrots form pair bonds that tend to mate seasonally and that may actually remain bonded for years or even their entire lives.  Even during the non-breeding season, these pairs live in close contact – nesting together, preening each other, foraging for food and nest sites together, and vocalizing constantly. This strong need to socialize is a very important component of these parrots’ culture and directs much of their daily activity.

In captivity, most pet parrots are not able to interact with other parrots. Many pet parrots are housed singly in cages and given little to do but chew on a few toys hanging in their cages and eat food presented to them in bowls. They have neither the opportunity to socialize with flock mates, nor the chance to hunt for nest sites, food, or other activities. They generally crave attention from their human caretakers who often spend very limited time with them each day. When light cycles and temperature changes signal them to breed in the spring, they often become sexually frustrated and manifest behaviors such as feather destruction, self-mutilation, aggression, and purposeless screaming – behaviors that are generally not seen in wild parrots and that have no adaptive function for these wild birds. The fact that wild birds generally don’t display these behaviors and that administration of synthetic hormones that suppress natural sex hormone cycling in captive birds underlines that fact that the way parrots are housed and raised in captivity is completely unnatural for them; in fact, many of the problems avian veterinarians are challenged with treating in these birds are actually man-made. What is the solution? Should parrots be kept as pets at all? This is an ongoing debate for which there is no correct answer.

Many parrots, when given the opportunity to participate in activities (such as hunting for food, shredding and tearing up wood and paper, manipulating puzzle toys, interacting with humans on a daily basis, watching TV, listening to the radio, sitting in direct sunlight, bathing) other than those directly associated with mating seem to be less obsessed with breeding than those left with little other stimulation than that which they get by masturbating on their perches or toys.  So, the take home message here is clear: if you’re going to have a mentally, as well as physically, healthy pet parrot, you must provide it with outlets for activity other than those that involve sex. If you don’t, you may end up with a raging hormonal ball of feathers that is neither happy, nor makes a good pet.

22 thoughts on “The sexually frustrated parrot: a man-made phenomenon”