Home >> Positively Contributors >> The Mystery of the Yellow Pillow Case

The Mystery of the Yellow Pillow Case

"CHESTER," THE CHESAPEAKE BAY RETRIEVER in my office must have weighed 100 pounds, with a head the size of an oven. He'd been brought in for "Dominance  Aggression," according to his owner. It seems he'd been growling at the family, along with leaping up on the bed whenever he heard the word "NO!", and lifting his leg on the pillow. Chester may have had a sweet face and big, brown eyes, but surely there's not enough "cute" in any dog's face to make up for pee on the pillow. 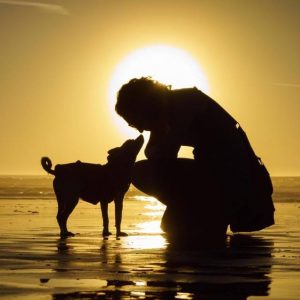 THIS WAS EARLY in my career, and I'd been told that Chessie were famous for being pushy, dominant dogs. After all, they were bred to break ice in the late winter off the east coast, and were known for being hardy and a tad bit demanding. Chester and I looked each other over in the office. When I made eye contact he seemed to melt, body slumping, tail thumping, with his ears pinned back while he grinned back at me like a fool.

AS PART of my evaluation, I picked up his back paw and held it for several long seconds. Dogs are rarely fond of having their paws held (Golden Retrievers are, however, not aware of this fact!), and I'd found that status-seeking male dogs often objected to having their back paws held and restrained. Their bodies would freeze, their mouths would close tightly, and sometimes their  heads would turn slowly toward mine, fixing my own eyes with a cold, hard stare.

NOT CHESTER. Chester's body stayed loose, he squiggled like a puppy and licked my face. Hardly the behavior of a dog "trying to get dominance" over me. We worked together some more, and every posture, expression and behavior from Chester said "I'm yours! Do whatever you want!" Hmmmmm.  It all became clear when I got more information from his owner, John. It turns out that the breeder had warned him that "You'd better get dominance over this dog" early on. Thus, when Chester made his first house training mistake and urinated in the house, John grabbed him, rolled him over on his back and raised his voice. Chester was so scared that he urinated in fear, which, needless to say, stopped John in  his tracks, aware that he had gone too far.

THE REST of the story was easy to figure out: John had used methods that scared Chester into urinating, but Chester was no dummy, and as he matured  he learned that if he urinated, John stopped doing what scared him. He also learned to be afraid of members of the family; and why not, when they'd been taught to grab him, throw him over onto his back and yell in his face? He'd at first growled to defend himself, and had learned that growling stopped what scared him, and so he began to do it more and more. Why did Chester run onto the bed? Well, he was an adolescent, and even canine teenagers know how to push our buttons!

THE PROBLEM WAS SOLVED in just a few weeks. Chester's owners learned to teach him what they did want him to do, rather than just punishing  him for what they didn't want  him to do. They learned  humane methods of correcting mistakes, and fun, effective and family-friendly ways of training Chester to be a polite member of the family. Last I heard, the family's pillow cases hadn't turned yellow for a long, long time.

Patricia McConnell, PhD, a Certified Applied Animal Behaviorist, (CAAB) has made a lifelong commitment to improving the relationship between people and animals. She is known worldwide as an expert on canine and feline behavior and dog training, and for her engaging and knowledgeable dog training books, DVDs and seminars.

More about Patricia More Articles from Patricia
JOIN THE CONVERSATION

3 thoughts on “The Mystery of the Yellow Pillow Case”