The Kindness of Strangers

Just after Christmas I heard of a terrible situation, it really did sound completely hopeless.  In case there any other international emergencies please do follow me on Twitter - I'm @beverleycuddy

Happy New Year and congratulations Victoria on this wonderful new site. A pleasure to be here.

In brief, a family was in real mess. They'd had to move back to Britain from Spain in a dreadful hurry. The husband was disabled when they moved out, but his condition deteriorated very rapidly and medical advice was to get home ASAP. They'd acquired three additional rescue dogs while they'd been out in Spain. Dogs that wouldn't be alive if they'd not given them a chance. Plus they had a beloved Border Collie. They had intended staying out in Spain so the dogs hadn't got current Pet Passports - leaving them behind broke everyone's heart.
The dogs went into a recommended kennels in Holland to await their paperwork maturing - it takes six months.

But disaster struck. There was a hold up with the husband's disability benefits and the offer of work for the wife and two daughters didn't come to anything.
They got behind in their payments at the kennels and even with a generous reduction couldn't pay the final installment.
At Christmas the dogs' passports were ready for them to travel, but the kennels wouldn't release them without being paid.
Worse, the family were given an ultimatum. Pay up by this coming Saturday or the four dogs would be PTS or rehomed.
That's where we came in.

I am the Chairman of a tiny, ancient charity Tailwaggers Club Trust. We normally help pet people struggling with unexpected vet fees, but as no other charity seemed to be able to help this family we were pretty much the family's only hope. And besides I saw the photo of Comet and the others. After that I couldn't walk away!
We had to raise more than 2,000 Euros in a ridiculously short space of time during what appears to be the Ice Age in Britain and at the time of year where no one has any spare cash.
I wrote a blog and got on Twitter at every possible moment. I said we needed a miracle, it did sound like a mountain to climb.
But the money started to come in and people were just wonderful at retweeting the message ever further afield.
An anonymous donor gifted £750 and we were suddenly almost half way - there but time was definitely running out and I couldn't get an extension from the kennels.
Then one lovely person stepped in and said while she wasn't rich, she'd be happy to loan the family the rest. And she went straight to the bank and organised a transfer direct to the kennel's bank account.
How wonderful to hear the tears of joy from the owners after the total despair the day before.
One of their daughters is starting a new job on Monday - so it does seem life is at last turning around from these poor people.
We needed a miracle, we got one.
It just shows how much we can all achieve if we pull together and help our fellow man and his or her dogs! 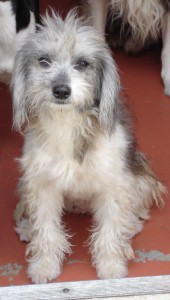 Beverley Cuddy has been the editor and proprietor of "Dogs Today" Magazine since 1990. She had her own column in the Mail on Sunday for eight years and has regularly appeared on TV and radio programmes with a doggie theme. She is also chairman of Tailwaggers Club Trust, a canine charity that helps pet owners in distress.

More about Beverly More Articles from Beverly
JOIN THE CONVERSATION