The Fireworks Have Begun 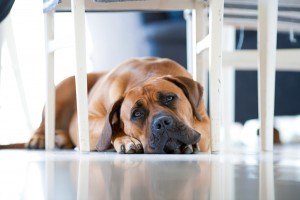 The fireworks have begun, now what? Yes, I know you realize that by thinking in advance more might have been done to help your scared dog or cat. At this point, obviously anti-anxiety medication taking weeks to kick in won’t help. And it’s exceedingly unlikely that a gradual counter conditioning and desensitization program to the sudden blasts of kaboom would have nearly enough time to be effective.

Here are some still options, depending on the level of anxiety, might decrease fear of the Fourth.

If your pet’s terror level is high – or one might say in the red zone – shaking, excessively salivating, becoming incontinent and/or not eating and described as “inconsolable,” contact your veterinarian and ask about SILEO (dexedetomidine ormomucosal gel. This oromucosal gel (which means it is applied to the pet’s gums) is quick acting, and it’s made for times just like these – when there’s no time for behavior modification. It takes about 30 minutes to an hour for SILEO to take full effect, and it typically lasts two to three hours. If the noise continues and the behavioral changes recur, further doses can be given at intervals of two hours, up to a total of five times during each noise event, as needed

While SILEO is effective in most dogs and safe, it is still a drug – and is not for all dogs; do speak with your veterinarian before applying.

Instead of being fearful, some dogs can be transformed into superheroes wearing a Thundershirt, Storm Defender. Wearing one of these products creates comfort for some pets.
*Thundershirt: A vest that applies gentle, constant pressure, similar to swaddling an infant.
*Storm Defender: A special lining, around your dog may bring relief to your nervous pet.
*Anxiety Wrap: Uses acupressure and gentle, maintained pressure to relieve stress and end fear in dogs.

Ear plugs for dogs: Several are available, mostly originally created for gun dogs, includes Ear Muffs for dogs. Sometimes convincing dogs to keep them on is the challenge.

I’m a big fan of what was once dubbed jollying, fund a way to have fun – whatever it takes to get your pet to focus on fun. Pets can’t multitask – if they’re having a good time chasing a toy or working on a food dispensing product, they can’t at the same time be anxious. It’s impossible.

I do understand that for dogs absolutely terrified of fireworks, this strategy may be challenging.

Attempt the best you can to set up your pet for success when you know firework are likely to be heard by escorting your pet into a room as far away from the noise as possible, such as a basement.

For dogs do plug in an Adaptil diffuser and for cats a Feliway diffuser. These are both knock offs of naturally occurring pheromones to help dogs and cats more comfortable in their own environment.

Close the windows (remember how pets’ sense of smell far exceeds ours; they may smell fireworks and certainly can hear them). Turn on a TV, or even better the radio. A Sound Beginning, or other sites with music to help lessen anxiety of worried dogs. One study suggests classical music is the most calming. Another recent study reports that Reggae relates to dogs the most. What’s most important is that the pet isn’t hearing fireworks.

Equally important is successfully distracting the pet, perhaps using a fishing-pole type toy for cats or a squeaky toy or ball for dogs. But probably more is needed because it’s not likely you’ll be home for hours to engage the pet. For dogs, stuffing low fat peanut butter or cream cheese into a sterilized bone (available at pet stores) is great. You don’t want to offer a treat the pet scarfs down in two seconds, after all, fireworks will continue for a while. Offer a mix of food and high-value treats in food dispensing toys, the kind which take some time to deliver.

Some have suggested that offering play and/or treats is rewarding the pets’ fear. That’s absolutely untrue. For starters, ideally the play and/or treats are offered before fear escalates. Also, as described, pets don’t feel fun and fear simultaneously – it’s one or the other.

Some pets prefer to be left alone – particularly cats – so hiding in a close or under the bed is the best way for them to deal with what’s going on. Again, this is where Adaptil and/or Feliway come in, for easing that anxiety just a tad more.

You a try a chewable nutritional supplement called Solliquin, which features which stress busters like L-Theanine, Magnolia officinalis and phellodendron amurense – all big words, but safe, which really can work.

There are a wide variety of other “calming products,” from aromatherapy to other nutritional supplements. Most of these are without much basis in science, but can certainly work for individual pets.

I can absolutely and decidedly offer advice on what never to do:

Do not tie out pets outside on a tether, or even keep them in yards without adult supervision. July 4 is tops on the list for pets that run off. They hear the crashes, and are so frantic they jump over fences they never even tried to scale previously. Tethering a dog is never a good idea, but on the Fourth, some dogs are so desperate to escape, they choke themselves on chains or ropes.

Never holler or scream or punish the fearful or terrified dog. All this will do is disrupt the human-animal bond, and increase your pet’s anxiety. Afraid of spiders? If you’re locked in a room with 100 creepy crawlies, and a friend hollers at you for being afraid, how does that help? So, the good news is that it’s not too late to help pets with fear of the Fourth. If your pet isn’t having a happy Fourth, odds are you won’t either.