‘That’s cheating!’.  I looked up to see a man shouting over to me.  He continued: ‘When your puppy came back to you then, you gave it a treat.  That’s just bribing: they should do things because they want to please you.’  He walked off saying: ‘A pat on the head should be enough’.

Well, I wasn’t going to let that put a downer on a lovely bit of recall practice with my puppy but it did make me wonder what it is that makes some people so reluctant to use food in training and how, if I had been able to have a proper conversation with this man, I might have responded to his comments.

If I were waving around a steak in order to encourage my dog to come back to me then, yes, you could argue that I was bribing or luring them to perform the desired behaviour.  However, it's hard to argue that something is a bribe if the dog is not aware of the potential reward until after they have performed the behaviour!  Regardless, my main aim in recall training is to build a really strong reinforcement history because we know that if we follow up behaviour that we like with great consequences (like tasty food) for the dog, then we will strengthen this behaviour, making it more likely to occur again.  Of course, we don’t want to end up with a ‘show me the money and I’ll think about it’ response from our dogs so we do need to be mindful of how we use food in our training.  For this reason, it’s important to fade out food lures pretty quickly if we are using them to train a specific behaviour, as I might for teaching a position such as 'down'. 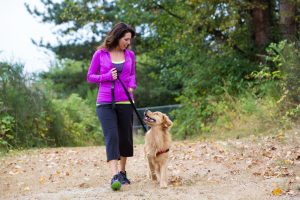 Shouldn't they just do what you say because they want to please you/ because you are in charge?

I’m sorry to break it to you but dogs (just like other animals, including humans on the whole), simply do what ‘works’.   This doesn't mean that they don't love you but there's generally got to be something in it for them.  Of course, for some dogs, praise from their owner is highly reinforcing and might be enough when your dog is being asked to perform a well-established, simple behaviour in an easy, low-distraction context.  However, the reality is that if you have failed to train using reinforcers that your dog really cares about, they’re not likely to be too bothered about ‘pleasing you’, when they’re faced with the allure of other potential reinforcers (such as continuing to explore the environment or chasing a squirrel).  You should also be aware that some dogs will do as they are asked because they are scared of the consequences of not doing so… but who wants a dog with a broken spirit who fears their owner?  Not me!

Can't I just pet my dog instead? 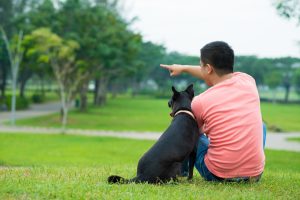 In training, you can reward specific behaviours with whatever your dog finds genuinely reinforcing.  Alternative possible reinforcers could include petting (although most dogs don’t really enjoy being patted on the head, as the man had suggested), allowing them to sniff where another dog has been, chasing you, playing tug, allowing them to move ahead, catching a ball, searching for treats thrown in the grass, retrieving an item, being let off the lead, being allowed through a door or to access something, praise... and many, many more.  So, yes, you can use things other than food but please be aware that these things are all specific to the situation and to your dog - what one dog finds rewarding, another may find aversive and what your dog likes in one context may not be enjoyed in another!  So, don't make the mistake of simply assuming that your dog finds your face-smushing affection reinforcing - if they're squirming to get away then you can be pretty sure that (in that context, at that time) it's not being going to act as a positive reinforcer for the behaviour that came before it, which is what you should be aiming to do.

I think more often than not, people’s objections to using food rewards in training come from a lack of understanding of what exactly is going on, something which is brilliantly illustrated by this image from @behavior vets. As you can see, it’s far from ‘cheating’! 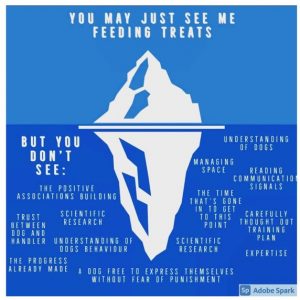 Gretta Ford is a VSPDT and Clinical Animal Behaviourist, living in North Yorkshire, UK. She is passionate about helping dogs and people enjoy happy lives together.