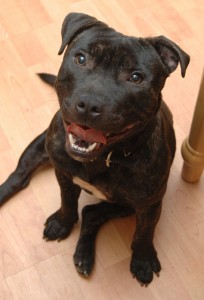 What looks like a jelly bean but feels like a gummi bear? No it's not something edible. It's a testicular implant for dogs.

While some of you may find the idea laughable, this product is no joke. In 1995, inventor Gregg Miller developed these oblong tidbits of glory called Neuticles® and already 425,000 pets sport the implants worldwide. The hotspots for insertion in the U.S. are Texas, California, and Florida in that order—one can only guess why. Oddly enough, England used to lead the way internationally, but recent bans on any type of plastic surgery have resulted in a sharp drop in sales there.

Neuticles® come in a plethora of different sizes ranging from the minute version for one to three pound dogs to the gargantuan 3 inch by 6 inch Neuticles for bulls. But don't even think of swapping for the next size up. Even when using the appropriate size things can get kinda crowded. Dr. Robert Arrick, of Park Animal Hospital in San Francisco placed neuticles in a Rottweiler and describes the implants as "a tight fit," which accounts for the procedure taking him well over the two to three minutes described in the instruction manual.

Despite this fit, the testicle switch is relatively easy. A veterinarian simply makes the discrete exchange during the regular neutering process. As with regular neutering, it's a relatively low-pain, quick recovery job. And, even with the Neuticle originals, made of polypropylene which gives them a rock hard feel, the dog looks the same and owners are satisfied. There's only one downfall says the inventor, "In a few dogs, you occasionally hear a thunk when they sit."

But there's a way around that. For owners who are really picky, there are NeuticleNaturals® which are made of FDA-approved solid silicone for a softer, almost rubbery, feel. Having this more natural version can cost up to four times more than using the originals, but let me tell you, when it comes to natural feel.....Okay. Okay. I've never actually felt the product, but Miller assures me that they're almost like the real thing. The dogs can't tell the difference, but then again they were just as satisfied with the hard plastic version. More importantly, most owners can't tell the difference, though Miller admits that an owner once called him to complain, "They don't feel just like the old ones."

Who needs Neuticles®?
This all brings up the question: Who are the 425,000 people whose dogs are happily wearing fake symbols of their manhood?

Could they be an underground group of show dog enthusiasts who want to secretly neuter their dogs and then illegally compete with them in American Kennel Club conformation shows? Well, that wouldn't be very lucrative, nor would it be effective since any competent judge could distinguish a fake pair of family jewels from the real McCoy. So who does that leave? Well, for one, Kim Kardashian. In 2010 she had her wayward wondering boy Boxer, Rocky, neutered, and Neuticles® placed. Surprisingly she chose the smaller sized pair of Neuticles®. According to one report, “she doesn’t like big balls on dogs, or anything else.”

But are celebrities and other plastic surgery buffs the only ones who would go for this? No, the answer lies all around us. According to Dr. Cynthia Edleman, a Castro Valley veterinarian who's placed Neuticles® in a number of dogs, they're just regular people who want their male dog to look the same after surgery. These clients include women as well as men and their dogs range from pit bulls to pugs.

So maybe these are just every-day people like you and me,? Not quite. These are a more dedicated group of people willing to go to extreme lengths to ensure their male dog remains male-looking. For without Neuticles®, these owners would have braved the behavior of a dog at the mercy of its hormones. They would have repeatedly forgiven Rover for demonstrating his sexual prowess on inanimate objects. They would have endured the scene he made upon sighting other male dogs. They would have coped with his frequent attempts to escape in search of "female company" even though such breakouts could easily lead to a fatal rendezvous with the front end of a moving car.

Why risk all this?
Many are concerned that their dogs will experience "post neuter trauma," a term coined by Miller to describe the mythical condition where a male dog is depressed due to losing a familiar body part. The truth is dogs are not as intimate with certain private body parts as some members of our two-legged species might suspect. In fact, once fully recovered from anesthesia, Rover usually continues on with his happy, carefree life as if his "hormone-secreting friend" had never existed.

What do veterinarians think?
Because of its purely cosmetic use, many veterinarians find Neuticle® insertion an odd request, but because it's the only way some people will opt for the birth control procedure, veterinarians are becoming more open to their use. "We don't offer Neuticles® to every client as a matter of course," says Dr. Dean Beyerinck of Irving Street Veterinary Hospital, "but if we're really trying to convince a client to have his or her dog neutered, we mention it."

And what do I think?
While I would never use them on one of my own pets, if they cut down on the number of dogs my colleagues and I have to euthanize for the animal shelter due to pet overpopulation, then bring them on.

Can dogs with Neuticles® still have sex? Read "Can Neutered Dogs Still Have Sex" to find out!