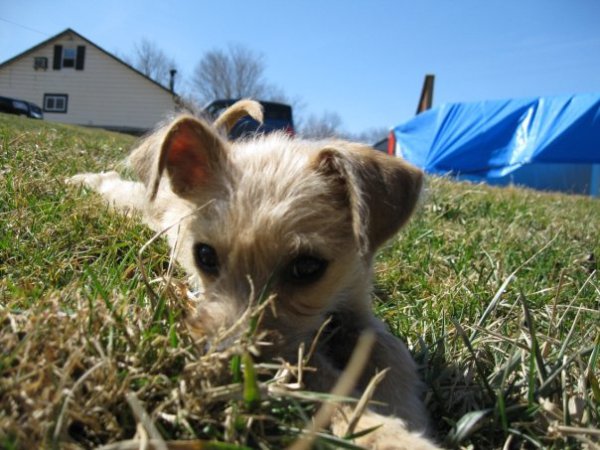 I am going to spend the next four weeks sharing articles I have written for an agility magazine called Clean Run. One of the main reasons I am an effective dog trainer and have strong mechanical skills when teaching and handling dogs is because of my many years as an student of agility. This dog performance sport takes the science of behavior and learning and puts it into practical application. I am regularly challenged by the sport and by my own dogs to be clearer about the information I am giving and how I am communicating.

Here is the first article I wrote for the magazine:

I thought I knew how to train dogs. Then I adopted a Terrier/Chihuahua mix puppy and named her…..Tricky! People warned me when I named her Tricky, jokingly and affectionately telling me she would likely embody the name I gave her. They weren’t kidding. Tricky pushed and continues to push my training knowledge, understanding of learning, and mechanical skills to the limit! And I thank her every day for it. Every agility dog offers a variety of training challenges specific to the breed or the individual. In this article, I am going to talk about some of the lessons I learned in my experience with Tricky.

When Tricky was six months old, I attended an agility training camp. On several occasions, Tricky ran off to play with other dogs. Her eyes and focus were often elsewhere, even if I had a hunk of steak between my fingers. During one of the lectures, I had a “lightning bolt” moment and a whole new level of understanding occurred for me. The presenter told the group that herding dogs were bred to work dependent on people, whereas terriers were bred to work independent of people. Duh!! After that simple but very profound statement, I completely changed my training plan with Tricky. I was already working within the concept of ‘Nothing in Life is Free’; meaning just as I had to work for my paycheck, Tricky had to work for things she wanted. I realized that I had to take this concept to the next level and get creative with training this little terrier.

This principle is also known as Grandma’s Law because it comes down to one simple rule: you have to eat your veggies before you can have your dessert. This technique was helpful in training my older dog Claire to recall off a squirrel. Food was not valuable enough when she was about to take off after a speedy critter. So I taught Claire that if she came running to me when I called her, she would be released to go chase that squirrel: dessert after veggies.

As a puppy, Tricky wasn’t very food motivated. She preferred toys, especially tennis balls. Her eyes would literally light up when she saw a tennis ball. To make training easier, I needed her to love food the way she loved tennis balls. 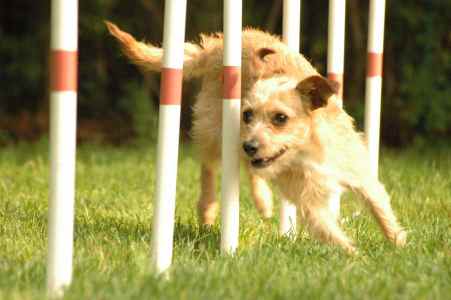 Eventually the behavior grew so that I was able to ask her to SIT, give her a yummy treat, and then reward her with a tennis ball. Essentially, I was rewarding Tricky for eating treats. Soon, the value of the toy transferred to the treats. Now Tricky will accept anything I offer her as a reward.

Think about different things your dog LOVES. Maybe it’s other dogs, freedom, a specific toy, other people, sniffing the ground…ask your dog to perform a behavior, then reward your dog with what he really wants. If you are trying to get him to love food (the way I had to do with Tricky), then ask your dog to perform the behavior, offer a treat, and then reward him with what he really wants.

For a while, the start line became my nemesis. Not because Tricky couldn’t hold a sit/stay–those were solid as a rock. Her focus-or rather her eyes-were the issue. I would put Tricky in a sit/stay and walk to lead out position. When I turned around, she would literally be watching the clouds. Her focus was everywhere except on me. If I led out just a couple of feet, Tricky was intensely focused on me. Anything past that, she was looking at the clouds in the sky. This was a problem because I knew that I didn’t have her focus. As a result, I wasn’t sure if she knew where she was going, especially on more complex lead outs. Not to mention she was clearly not very interested in the game if she was picking out shapes in the clouds.

Going Back to the Basics

I addressed this issue in several ways. The first foundation game I pulled out of my toolbox was Crate Games (developed by Susan Garrett). I knew Tricky had great focus and impulse control understanding in her crate. When she was younger, I used the crate in her foundation handling drills as well, allowing Tricky to practice sit/stays with focus. I put the crate in front of a short sequence, practicing a skill called focus forward. The plastic-sided crate prevented rehearsal of environmental scanning. Plus, Tricky already knew that she should look at me when in the crate because of all of the Crate Games we had been playing since she was 8 weeks old. So, no more opportunities to pick out shapes in the clouds!

Practice makes perfect, so I tried to think about all of the places Tricky could be rehearsing scanning so that I could keep the behavior to a minimum. For instance, during downtime between training sessions, I started covering Tricky’s crate with a blanket. Dogs find the outside environment incredibly reinforcing-it’s like watching television. I’m sure Tricky would have liked critter watching to turn into a hobby, but this technique helped to prevent that from happening. I also thought about what she was doing during the rest of the day. For example, I had a huge picture window in the main living area of the house and Tricky was spending a lot of time watching ‘TV’ there. Tricky was no longer allowed to ‘watch TV’ through that window.

I also became conscious of how I was rewarding Tricky’s sit/stays on the start line. Instead of the usual peanut butter and jelly routine of walking back to Tricky to reward her with a treat, I spiced things up a bit by being unpredictable with how and the types of rewards I used. Because Tricky had great impulse control understanding, I could throw toys back to reward her sit/stay and focus on me, without her getting up for the toy until released. This kept things interesting for her because Tricky never knew when the crazy momma was going to chuck her toy at her. I made sure to only reward her when she was watching me lead out because again, the goal was not just to reward the sit/stay, it was to reward focus on me and the game.

Another way I added some pizzazz to our start line routine was by adding relationship games before leading out, raising Tricky’s level of arousal. These games included tugging on her leash, shadow handling in a small area, and some tricks. Then I ran out to position. My playfulness and motion kept Tricky’s eyes on me the entire time. Basically, I had to show her that I was where the party was at.

With the combination of these games, and preventing Tricky from practicing ‘sight-seeing,’ I was able to resolve her focus issues on the start line.

Go be a Dog

There is such a thing as too much control. Everyone needs a balance of fun, freedom, and letting loose-even dogs! If the thumb of self control is pressing down too hard on the dog, he will eventually pop. I equate it to a studious teenager under serious parental control that basically goes wild once in college. Too much partying isn’t good for anyone. What that may look like for a dog is running off and having a ‘party of one.’

I was lucky to have this lesson pointed out to me very early in Tricky’s training. I had heard stories of dogs that regularly ran off, stealing reinforcement. This was often the result of too much self-control and too many boundaries. Not having access to the things that dogs enjoy can actually create problems; such as running off, visiting, and the ever frustra

ting but laughable ‘zoomies.’ Tricky was about 5 months old when she had enough of my ever oppressive thumb of control. We were walking in the woods and I called her to me. Tricky was about fifteen feet away from me, sniffing some grass. She picked up her head to look at me, and then ran in the opposite direction. Yikes! I could have ended up heading down a slippery slope, but thankfully I was training with people that had already been there, done that and had shared their lessons with me.

I started incorporating free time into Tricky’s training. One of the things that she enjoyed was taking her tug toy for a victory lap around the yard. During our training sessions, I sometimes let her have the tug toy and told her ‘Free’, which simply meant ‘go be a dog’. This also meant she could go sniff things, hang out, roll in something gross, visit another dog or person-it was her choice. I balanced this with calling her out of the ‘Free’ mode to return to training as well as teaching her to not run off during our training sessions unless told she could.

Before I got Tricky, you might have thought I spent years in etiquette school by the way I trained and the perfection I strived for. And I did this to a fault. All of the fun was sucked out of the game and the process of dog training. My first agility dog allowed me to get away with this and we still performed decently together at the local level. Tricky was a whole other ball of wax. This little terrier brought out the wilder, sillier side of me that I never really knew I had. And I brought that into our training sessions together. I laughed more and learned how to be lighter about training for agility. The goofier and more engaging I was with Tricky, the more she wanted to play with me. Silly is so much more fun than perfection!

Clarity & Harmony…a better way of living with your dog.