Home >> Positively Contributors >> Teaching Rover to Race to You on Cue

Teaching Rover to Race to You on Cue 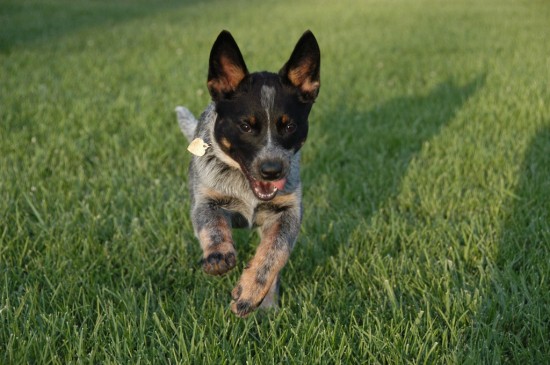 The problem with speaking English instead of using made-up words is that we assume our pets know what we mean. We say, “Sit” and expect Fido to drop his derrier, but the command Fido’s learned is “sit, sit, sit, SIT!”

Then once he’s done the deed, we praise with “Goodsit,” when just “Good” would do, thinking that Fido understands that “good” modifies the word “sit.” Do we think “Gooddown,” or “Goodstay” would cause him to walk away confused, or that “Goodgirl” would cause a boy bowser to develop a gender identity problem?

These minor language misconceptions probably seem moot; however, when the message we want to convey is for Fido to come right away, proper communication may save the day. If Fido could race over every time we called, imagine the possibilities.

When Fido darts out an open door, you could call him once and he’d speed to your side instead of thinking that your call was his cue to lead you on a game of chase.

Or at the dog park when he sniffs a mound of manure, one call would mean “hurry back right away” rather than “return at your leisure after you roll in the stinky stool.”

How can you get such a rapid recall? You can start by making yourself more interesting then a pile or poop… or a neighborhood dog, or any other distraction that Fido finds more entertaining than you. Here’s how.

Start with Fido on a leash in a quiet, distraction-free setting and give him a few tasty bite-sized treats so that he knows you’re up to some fun. Then, when you have his attention, suddenly run backwards a few steps and say “Fido, come.”  Your sharp movement should stimulate him to want to play. As he closes in, hold the treat at his nose level so he keeps all four-feet on the floor and give him the treat when he catches up.

This step sounds simple but at least half of your friends are already messing up. First, be sure you say “Fido, come,” only once if your goal is that he comes the first time. That is, quell that irresistible urge to blabber his name and the cue word repeatedly. Second, make sure your summon sounds like an invitation to play rather than a roll call on death row. Your goal is to teach Fido that running to you is more fun than a romp with fellow rovers not a sentence of doom.

Once you know you have this part down because every time you call, Fido immediately runs over, you can up the ante by expecting him to sit in front of you. No need to say “sit.” Using your treat as a lure, just silently guide his nose up when he reaches you so the weight shifts onto his back legs putting him into sit position. Now, the new meaning of “come” is to race over and sit in front. To make this into a real game, turn and run away a short distance when you call him so the exercise is involves a short chase. When he catches up, stop so that he can sit in front of you and receive his treat.

The next step is to add mild distractions such as a toy or bone on the ground or other family members playing nearby. Walk towards the distraction and before Fido becomes too engrossed, call him and run away so you lead him in a chase. If you call soon enough and have practiced the earlier steps well, he’ll immediately race after you. Cheer him on so he knows for sure he’s having fun and give him his treat when he catches up.

Repeat this game with different distractions starting with easy and progressing to more difficult. Randomly practice at home and when on walks so he never knows when to expect you to break out in play.

At this point many owners mistakenly let their dogs run off-leash at the dog park.  There, Fido frequently comes when called giving the owner the false idea that he has the exercise down pat.  But like the running back who breaks 100 yards per game but fumbles on all the key plays, Fido's perfect except when it's really important.  He always comes running but sometimes not until after he finishes rolling in the dead rat, after he aggressively approaches and barks at other dog owners, or after he runs half-way across the street.

To prepare Fido to recall reliably off leash, practice all of the earlier exercises on a long leash until “coming” when called even with tempting distractions become his habit. And, make sure that once he’s with you, he’s happy to stay focused on you until you give him the okay to do his own thing again. Gradually graduate to more distractions such as toys, new scents and even other dogs. This may take a little longer than you first thought, but by being consistent, careful, and always expecting him to come when you call just once, you’ll develop a Fido who understands what you really want.  For more information and for step-by-step photos, check out drsophiayin.com.

Originally appeared in the San Francisco Chronicle in March 1, 2003.

7 thoughts on “Teaching Rover to Race to You on Cue”