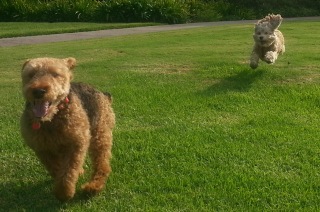 Does your dog ever behave in what appears to be a jealous manner when you interact with a friend’s canine companion? How about his behaviors around toys or food? Does your dog suddenly become more interested in his playthings or meals in the presence of another pooch?

I have certainly seen my own dog, Cardiff, exhibit such above behaviors. When another dog comes over to our home, he becomes more interested in interacting with me in a manner that limits the guest pooch’s access to my attention. Cardiff also strives to prevent that dog’s access to his toys and may growl or posture in an intimidating manner toward our canine guest. I’ve actually welcomed the presence of other dogs to motivate Cardiff to eat during bouts of chemotherapy-induced inappetence. Thank you, Lucia and Olivia.

But perhaps Cardiff was just being jealous, as a recent study proved that dogs can exhibit behaviors consistent with jealousy.

The CNN article Study: Dogs can feel jealous, too shares the findings of a University of California, San Diego study which evaluated the behaviors dogs display when their owners interacted with an animatronic canine-version that vocalized (barked and whined) and wagged its tail.

How Was the Dog Jealousy Study Performed?

Christine R. Harris and Caroline Prouvost performed the study, Jealousy in Dogs, which was published in the peer-reviewed online scientific journal PLOS One. Small dogs were chosen to be part of the study to permit the researchers to more easily control undesirable behaviors. Thirt-six dogs weighing less than 35 pounds or shorter than 15 inches were studied. The breeds included:

All of the dogs were individually evaluated in the familiar settings of their own homes while their owners interacted with the animatronic dog, a children's book, and a plastic jack-o’-lantern, and ignored their pooches. 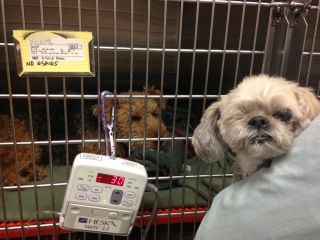 How Did the Study Determine the Dogs Were Exhibiting Jealousy?

Reportedly, the real dogs showed behaviors consistent with jealousy by preventing the animatronic dog’s access to their owners and barking and biting at the robotic canine.

The owners’ pleasant praise and gentle petting of the robot dog invoked more of a jealous response by the canine subjects as compared to their responses to the owners’ comparable attentiveness to the book (which played music and featured pop-up pages) and jack-o’-lantern.

The study finds that social interaction is one of the key stimuli for canine jealousy, as the moving and vocalizing object caused the canine subjects to show jealous behaviors more so than the inanimate objects. I find it quite intriguing that 86 percent of the participating dogs approached the behind of the animatronic version to sniff around the anus, as they would do when interacting with real dogs (or cats).

The findings are comparable to human studies, where infants as young as six months showed jealous behaviors when their mothers attended to a realistic-appearing doll, but did not show jealousy when the attention was instead placed on a book.

What Does the Study Determine About the Biological Basis of Jealous Behavior?

Evidently, we humans aren’t the only species capable of jealousy. Yet, are human and canine responses learned or do they have some sort of inherent biological basis? Harris and Prouvost's study finds that ”these results lend support to the hypothesis that jealousy has some 'primordial' form that exists in human infants and in at least one other social species besides humans” (i.e., dogs).

I look forward to hearing about other studies showing how animal behaviors correlate with human emotions.

Has your dog or cat exhibited behaviors consistent with jealousy?  If so, feel free to share your perspective in the comments section below.

One thought on “Study Proves Dogs Can Feel Jealousy”