After U.S District Court Judge granted a motion for Snickers to be returned to Jim Sak and Peggy Leifer, the couple walked outside the courtroom only to find that they incurred a parking ticket.

A few hours later, Peggy called me and she could barely laughed contain her laughter, “I knew you’d appreciate the irony,” she says.

Irony, in part, because her husband, Jim, 64, had been a Chicago police officer for 32 years (on the other end of those parking tickers). He’s also a Vietnam veteran. Clearly, the man is hero.

In 2008, Jim suffered a stroke. He depends on Snickers his service dog, to help enhance his independence.

In November, Jim and Peggy moved back to her home town of Aurelia, IA to help care for her ailing 87-year old mother. A hero and a good guy. 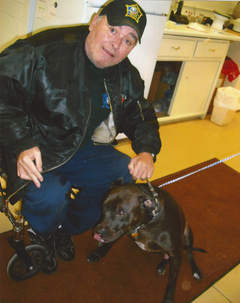 Snickers happens to be part Pit Bull. And the city of Aurelia banned Pit Bulls and “bully breeds” several years ago. Well, maybe Snickers is a Pit Bull, but who knows. A certain look doesn’t necessarily correlate with what really is genetically in a dog. Peggy recalls, “We took in this 10-week old something dog – we really don’t know what Snickers is. Maybe part Lab, part Boxer and he does have broad shoulder of a Pit Bull, but we don’t know.”

Never mind that this dog had done nothing wrong, and is by all accounts is very friendly and is well trained. After two council meetings, Jim and Peggy were told to get their dog out of town, or else.

“The ADA (American for Disabilities Act) Guidelines are very clear on this issue,” says Rebecca Huss, a law professor at Valparaiso University, an expert on service dog related issues. “The breed or mix is irrelevant when it comes to service dogs. The ADA isn’t about dogs, it’s about giving people with disabilities access and enhancing independence.”

Sometimes Jim’s leg begins to shake, and 85-lb. Snickers will push him up against a wall so he doesn’t fall. When Jim falls, he is able to get up by grasping on to Snickers. “I have a very hard time getting Jim back to his feet, but he and Snickers have it worked out,” Peggy says. Certified as a therapy dog, it’s difficult to argue that Snickers doesn’t assist Sak.

Also, a petition supporting giving up the dog was passed through the town of about 1,100, which 38 people signed.

Snickers future was discussed in both council meetings, before the decision was made. Snickers even attended the first of the two meetings. “I wanted to show everyone how friendly he is,” Peggy says.

Snickers was perfect, friendly and as well behaved as can be. Eerily, though, Snickers whimpered whenever his name was mentioned. It’s as if somehow this innocent dog knew he was a target. Maybe Snickers knew what was to come, or somehow felt unadulterated hate by at least a few in the room.

By a three to two vote, it was determined that Snickers would have to be removed from town. One of those votes to jettison the dog came from Cindy Nelson, a city council member. When reached by phoned, and asked to comment, she said “no comment” and hung up

George Wittgraf, an attorney representing Aurelia said he will stand by the comments he made to a Chicago newspaper reporter. He said, Aurelia is “simply exercising its authority to protect and preserve the rights and property of its residents — whether or not that’s trumped by” federal law.

Huss says, “Ugh, no. You can’t have local actions or laws which are contradictory to Federal Law.” And while this seems to be common sense which most high school students enrolled in a rudimentary civics class understand, the public servants of Aurelia chose another course.

Snickers spent several days in a kennel just outside town, and then moved into a foster home. 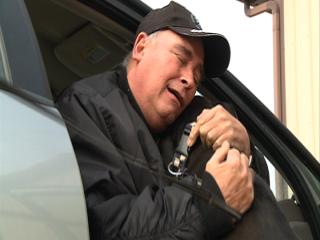 Jim Sack and Snickers were recently reunited after he was removed due to local breed-specific laws.

“Snickers gives Jim a feeling of independence, but the relationship is so much more,” says Peggy. “Here’s this tough ex-cop – and I am here to tell you Jim is tough. This dog makes Jimmy happy in way I can’t even explain. This dog is Jim’s heart. Snickers is like an anti-depressant drug. And then to be told when we explained Snickers is a service dog, to just get another (service dog).”

Of course Snickers isn’t like an old chair that can just be replaced.

Breed bans (almost always banning Pit Bull-looking dogs, and sometimes other breeds) have been passed in various cities and counties sporadically across the country. The wave of those bans began to wane around the time Michael Vick was convicted of dog fighting. In fact, it was Huss who was given responsibility by a court in 2007 for recommending the disposition of Vick dogs.

Huss agrees one lesson from the Vick story is that the dogs are merely victims of deplorable human behavior. “A type of look doesn’t make a dog dangerous,” she says. “But there’s a greater legal issue at stake.”

To that end Sak and Leifer have sued Aurelia for damages and costs associated with their ordeal (which the Animal Farm Foundation stepped up to pay for). “I’m not a litigious person,” says Leifer. “But we hope our case will prevent this from every happening again.”

In fairness, most people in town appear sympathetic, not to mention an outpouring of understanding emails from around the world – since the story has hit the Internet. In fact, several people who signed the original local petition in support of forcing Snickers to leave town have apologized, pointing out the petition never indicated Snickers is s service dog. Peggy said she heard someone in town was selling ‘Save Snickers’ t-shirts.

Still, when Snickers was removed from his home - the stress clearly took a toll. Though he was well cared for, Snickers still broke into hives and a rash, which was deemed stress related. Peggy rushed her husband to the doctor for elevated blood pressure.

The good news is that December 28, 2001; after several hours in court, the judge reunited Saks with his best friend by court order. And certainly national attention has been directed to the value of service dogs – and bred doesn’t matter is a message which the public seemed to understand.

“Listen, I take no pleasure that the media has painted the whole town as ignorant because of the ignorant actions of a few,” says Peggy “Many citizens came out of the woodwork to help us. Complete strangers helping us move in, bringing food, installing needed things in our home to assist Jim and the many, many offers of help we have received.”

It’s really like the Pit Bull issue isn’t it? All may get blamed for what a few do.

“Oh, you’ve got it,” she adds, and laughs. “We felt it was important to stand up for Snickers.”

“Snickers has given me so much – we wouldn’t even consider giving up on him,” says Jim. “My hope is that what happened here is an example, so no one else with a service dog has to go through what we did. “

Jim adds, “When I came back from Vietnam in ’68, they called me names and jeered at me. It felt like it was happening all over again. What did I do? What did Snickers do to do deserve this?”