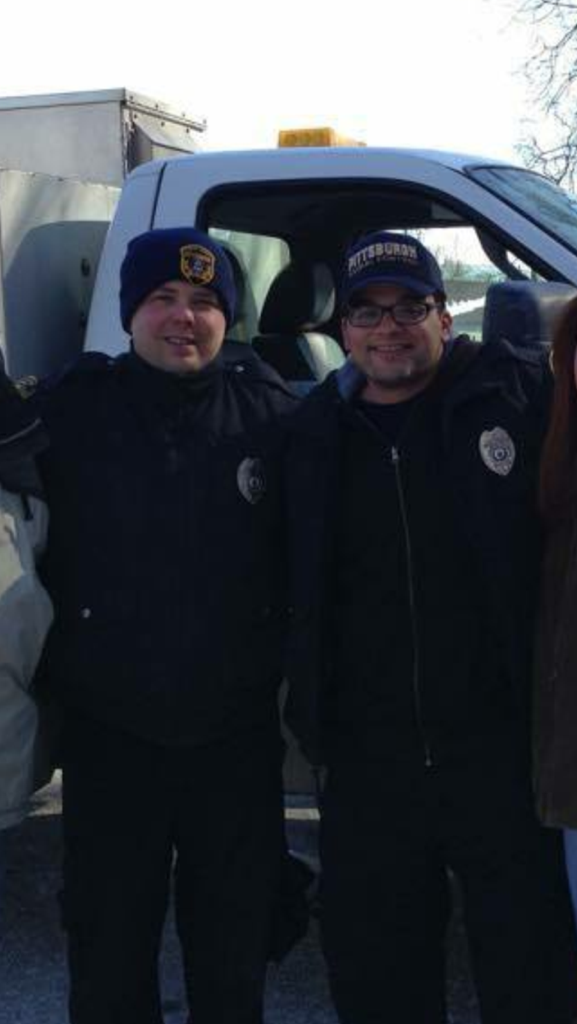 The ACOs who helped capture Gunner.

Depending on what geographical location you are in, you may or may not think highly of your local Animal Control Officer. These typically public service employees take a lot of heat because of some of the responsibilities of the job that they do. Here in Pittsburgh, these wonderful men and women issue warnings and citations for excess barking, running at large, no license or rabies and even serve dangerous dog paperwork when warranted. This part of the job can make then unappreciated by some segments of the dog owning population. But the dogs that inhabit that world can call these ACO’s their friends. They are the champions of the animals out there in need.

Animal Control Officers have a different role than Humane Officers. Humane Officers are the authorities who handle abuse and neglect, seeing things that no animal lover wants to see. ACO’s can often work hand in hand with Humane Officers in some cases. Recently, the city of Pittsburgh passed a law that includes a specific amount of time that an animal can be outside at all during extreme weather. Because this law spans both worlds, the city dog laws as well as humane laws, both entities are able to enforce it, resulting in a better world for the dogs within the city of Pittsburgh.

Calls run the gamut, with approximately 75% of calls relegated to wildlife. The city contracts with the Animal Rescue League of Western PA for animal care. All dogs and cats are taken to the main shelter in the heart of the city. All wildlife that are not rabies vector species are taken to the ARL’s Wildlife Rehabilitation Center in the suburbs. They regularly get orphaned squirrels, injured birds and other animals in need. Calls that are notable that result in a visit to the wildlife center include squirrels finding their way in a city resident’s kitchen.

Occasionally, the ACO’s get calls from pet owners who have misplaced their pet snake or alligator either somewhere in their home, or even scarier, outside. Recently, they helped trap a 400# black bear in a city neighborhood far from wooded. With help from the local game warden, the out of his element bear was tranquilized and relocated to a more appropriate habitat.

Calls about domestic animals have included the obvious such as dogs running loose to the more unusual, a homeowner finding a mother cat in their yard along with 3 newborn kittens. The officers routinely handle approximately 20-30 calls during a peak season workday. Peak season starts in the beginning of spring and runs through the beginning of fall. Winters are slower thankfully.

Colleagues describe many of the officers with fondness, emphasizing that they go above and beyond what their duties call for, on a regular basis. This includes bringing animals in to safety after hours. They don’t stop at simply caging them but they routinely make sure that the newly admitted animal has food and water. They personally foster animals that they seize or capture as well as adopting when their heart makes a connection. They check on animals that they have brought in to see how they are doing. This is what truly makes a great animal control officer. Every city should be this lucky.

Recently, the Animal Control Department was honored by the city for their part in reuniting a dog who had been missing for 20 months. This was truly a group effort of concerned animal lovers and all of the devoted animal control officers. A Golden Retriever mix named Gunner was missing from a completely different area of the city than this dog had been seen running in. Unbeknownst to each other, several people were on a mission to catch this dog. A kind hearted woman named Donna Greco, who lived in the area that Gunner was running in was feeding him so he was in good shape for having spent that much time running on his own. Another neighbor was leaving his garage open with blankets inside so that Gunner would have a safe place to bed down at night. When Donna discovered that the Animal Control officers were planning on setting a trap for Gunner to bring him to safety, she suggested that it be set on her property since he was eating his meals there already. Within 4 hours, they had him! The two wonderful ACO’s on duty when Gunner was captured, John Lapp and Gerald Stockton, could not have been happier.

Once at the shelter, Gunner was scanned and the chip revealed his identity and his owners were contacted. The reunion could not have been happier. Gunner clearly remembered them and showed his glee at finally getting the chance to be back with his family. I would be doing this story an injustice at telling it much further without including all of the links that told it first. Get your tissues ready as you will cry with happiness.

And the now famous video of their reunion.