Raising Awareness About FIP in Cats 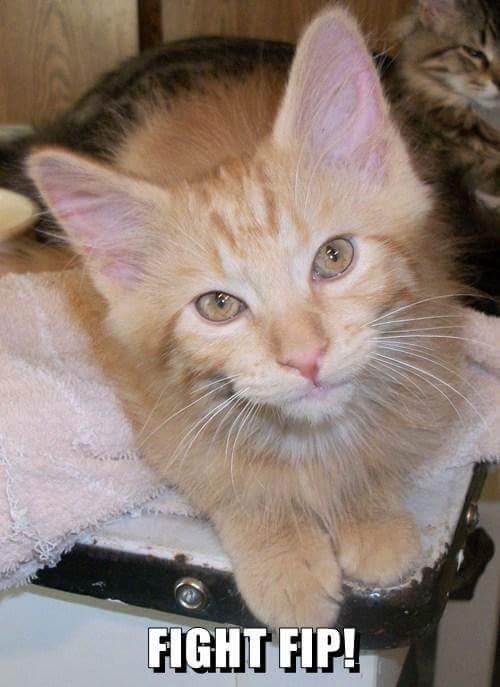 Feline infectious peritonitis (FIP) is arguably the worst thing that happen to a dog or cat. That’s because this disease – which is considered fatal – affects mostly babies, little kitties. And they suffer.

Here’s what happens. Many kittens catch a virus that sometimes causes the common cold in people. In fact, the enteric corona virus is even more benign is most cats. By the time a family member calls the veterinarian, the upset tummy that the virus might cause goes away. And often times there are no discernible symptoms. Corona viruses are species specific (so you can’t give or catch a corona virus to your cat) and are quite common. If the story ended there – it would be great, albeit boring.

However, in some cats this benign virus does a “dipsy-doodle” mutation (not a technical term) inside the cat and transforms into an immune-mediated disease which wages war on a cat’s organ systems.

There are two forms of FIP, wet (effusive) and dry (non-effusive). Kitties with the wet form look like they have a beer belly, as their tummies are filled with a liquid – which can be tested to determine If the cat has FIP. The dry form is more insidious, and often difficult to diagnose. These cats just “ain’t doing well.” That’s an accurate, although not so scientific description, and veterinarians use their best science to put the puzzle pieces together.

Cats with the wet form typically live for around four to six months tops. Cats with the dry form may survive longer, even up to a year.

For years, FIP was called rare. According to legendary researcher Dr. Niels Pedersen, professor emeritus, former director of the Center for Companion Animal Health at the University of California School of Veterinary Medicine-Davis notes that FIP kills an estimated one in 100 to one in 300 of all cats under five years old (though mostly kittens are stricken). And the frequency can be up to 10 times greater among kittens from catteries (breeders) or shelters.

There are two reasons why FIP occurs more often in shelters and catteries. One reason is that while FIP is not contagious, the enteric corona virus is highly contagious. The more kitties with the corona virus, the more kittens that will be exposed to the possibility of FIP occurring. Also, stress seems to play a role in lowering the immune system to allow FIP, and sometimes kittens living in crowded environments may be more stressed.

Dogs and people do not get FIP. So dollars devoted to study this horrible disease have been limited, and even efforts fund studies – that was until Pedersen came along, as he has spent an entire career learning about so many feline infectious disease, but he only recently began to crack the FIP code.

Pedersen was buoyed with dollars from the non-profit Winn Feline Foundation, for nearly 50 years the world’s preeminent funder of cat health studies.

When Susan Gingrich (that’s right, Newt’s sister) lost of her little Birman kitty to the disease in 2005, she launched the Bria Fund with the Winn Feline Foundation – with dollars specifically targeted for FIP research. Due to the infusion of money and simultaneously increased technology to better understand FIP at a cellular level, researchers are today closer than they ever have been to finding a solution. With some relationship to human SARS (Severe acute respiratory syndrome) interest in FIP has been spurred. And Gingrich and her international army have led a crusade to enhance awareness.

However, even with all that, still, no one knows for sure why the enteric corona virus mutates in some cats into FIP, while others (most cats) shake off the virus without any affects, living a long and healthy life.

The dream of millions of cat lovers around the globe is to find a treatment for FIP. Many of those cat lovers have contributed to Winn’s Bria Fund, and no doubt many have never heard of Winn – but would help if they knew they could – so it’s all about spreading awareness.

One fundraiser and effort to do just that happens on April 9, called Mr. Swanson’s Day. Chris Cook of Atlanta, GA describes her kitty who succumbed to FIP at the age of 17 months in 2011 as “The sweetest soul I never met. He was my heart my world.”

Mr. Swanson and his two sisters were little tiny balls of fur who were for the most part, feral. “I didn't even have Mr. Swanson for a year and a half before he began to show signs of illness,” recalls Cook. “After many tests and a second vet opinion, I finally got the diagnosis of FIP on January 9th. It was the day I told Mr. Swanson goodbye and my world shattered. During that time I had a dream that Mr. Swanson was going away but I was to share his awesomeness with the world. It wasn't until after his death, I realized what the dream meant.”

To help, copy and paste Mr. Swanson’s image and use it as your profile picture on Facebook on April 9. Also, please consider giving to the Winn Feline Foundation Bria Fund.

“The time is now because we’re at a turning point, with an excellent understanding of the disease process,” says Gingrich. “So much has been discovered over the past couple of years. We’re so close. But still so far.”

Please help to spread the word – and If you can, give, or if you know someone whose cat suffered from FIP, please consider giving to the Bria Fund.