Home >> Positively Contributors >> Problem Parrots and Progress With the Positive

Problem Parrots and Progress With the Positive 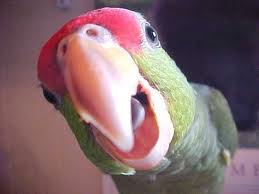 Birds are screaming. People are screaming back. Every spring, as the weather gets warmer and the days get longer, birds scream more. While some pet parrots scream every season, many scream more during spring when their hormones get revved up as they are looking to breed.

Wild parrots scream, too. They scream at sunrise to start their day and to search for breakfast. They scream at dusk as the flock gathers to eat dinner. But what is a natural behavior for wild parrots is an annoyance to many pet parrot owners, especially those that live in small homes with close by neighbors who don’t share their love for these very vocal pets. So, what do parrot owners do when their pets scream? Often, they start to scream back, only perpetuating the cycle of screaming.

Pet parrots scream for other reasons. The main reason they scream is to get their owners’ attention. They scream, and their owners respond (even if just to run to the cage to yell back at them to stop screaming). Positive reinforcement of the screaming behavior starts. The parrot screams, the owner comes. So the parrot will continue to scream, so that the owner will continue to come, and the cycle of positive reinforcement of an undesirable behavior is established.

Screaming is not the only behavior that bird owners inadvertently reinforce. The same occurs with biting. When bird owners want their birds to come to them, they generally hold out their hands in front of their birds and say, “Step up.”  However, sometimes birds are occupied with other activities (eating, playing with toys, etc.) and don’t want to step up at that moment. So, they express their lack of cooperation by biting their owners’ hands. Consequently, owners may scream (unwittingly positively reinforcing the biting behavior by responding to it with attention) and remove their hands (also positively reinforcing the biting, because now the birds have achieved what they wanted - not having to step up). Thus, another cycle of positive reinforcement of an undesirable behavior is established.

What can parrot (or dog, or cat, or any pet) owners do if their animals scream and bite and drive them crazy? Unfortunately, owners in these situations often end up ignoring their pets completely or relinquishing them to others who are more tolerant of these behaviors. With birds, this happens particularly after a few years, when the birds reach sexual maturity and are hormonally driven to scream and bite more. What these bird owners don’t know is that with just a few minutes of training each day, many of these pet-owner relationships can be saved, and owners can learn to enjoy their pets again.

As I am frequently reminded by my mentor, Dr. Susan Friedman, and other behavior specialists, behavior doesn’t occur in a vacuum. Behavior is learned, in part, either to achieve something good (such as attention from an owner) or to avoid something bad (such as having to step up on a hand when you don’t want to). This same is true for all behaviors performed by both animals and people. Behavior is repeated because it accomplishes something for the performer. If you think about it, why else would a behavior be repeated if it didn’t?

I teach parrot owners who bring their parrots with behavior problems to me that they can use the principle of positive reinforcement to help solve these behavior issues. Positive reinforcement training involves rewarding an animal’s behavior with something valuable to that specific animal (i.e. a food treat, verbal praise, a head scratch, etc.). For this training to work, the reward must be something very valuable to that particular animal, and what is rewarding to one pet might not be to another. For example, I may love pepperoni pizza and be willing to do anything for it, while you may hate it and ignore any request to perform a behavior that rewards you with pepperoni pizza. The same is true for animals that have likes and dislikes. Thus, it is critical that an owner trying to modify behavior with positive reinforcement training determine what makes his individual pet happy. The best way to do this is to watch the pet as it plays and eats to see what food and objects the animal seeks out. Once the owner figures out what is most rewarding to his pet, he can use this information in a training program to modify undesirable behavior.

Pet owners also can teach animals new behaviors (for a bird, for example, ringing a bell) by positively reinforcing these new behaviors initially when they occur accidentally or unpredictably. With repeated positive reinforcement of these new behaviors (i.e. giving the bird attention or a food treat every time it rings the bell), these newly learned behaviors may ultimately be used to help replace problem behaviors if these new behaviors can be positively reinforced in the situations that usually elicit the problem behavior. For example, if a bird screams every time an owner leaves the room, the owner should wait to come back into the room until the bird is no longer screaming but is ringing the bell. By going to the bird then and praising it or giving it a treat, the ringing behavior becomes much more rewarding to the bird than the screaming (which ultimately should go away because it is no longer rewarded). Simple, right?

So, if you own a bird or other pet with a problem behavior, and you are willing to work at it, problems behaviors can be eliminated, and the pet-owner bond can be re-established. All it takes is some patience and a few minutes every day. Remember, however, that animals aren’t machines; like us, they have good days and bad days, and when you are teaching them a new behavior, they may take a few steps forward and an occasional step back. There is no magic solution or quick fix to solving problem behaviors, and behavior takes ongoing practice to be maintained. However, with a little daily practice and long term dedication, you and your pet can live harmoniously together once again.

For help with problem parrots or any other issues related to the health and behavior of birds or other exotic pets, Dr. Hess can be reached through her websites, www.LaurieHessDVM.com and www.avianexoticsvet.com.