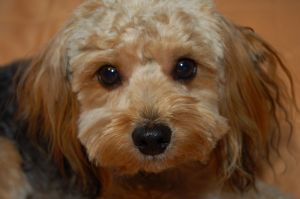 Q) Our ten-month-old Cockapoo is adorable; however, he has a problem. Whenever he gets excited, especially when my grown children and grandchildren come over, he pees on them and on the floor. We try very hard to give him lots of attention and everyone greets him on arrival, but the peeing is quite extensive. It also occurs when I bring him to their homes. As soon as we walk in, he leaves a trail of urine.

Are there some measures I can take to avoid the embarrassment and damage to the floors, shoes and pants?

A) Never fear, your pup's peeing problems will soon disappear. While little Fido's bladder control or lack thereof leaves much to be desired he's in a phase that most puppies pass through. He may be a little behind on the piddling predicament, but the problem is likely to eventually evaporate as he matures. In the meantime you can take several steps to speed the process along.

You've identified Fido's problem as occurring upon first greeting family and friends, and you've correctly observed that he piddles out of excitement. So the solution is simple. Don't get him so excited.

When family and friends come to visit, instead of petting and playing with the piddling pooch they should ignore the little guy for several minutes or until he has calmed down. Once he's standing or sitting serenely, they can try some placid petting. They should start with slow, even strokes paired either with silence or soft, soothing speech.

If Piddles the pup lets loose at this stage, the petting session started too soon, was too exuberant, or lasted too long. Petters should gauge his behavior. If Piddles starts to wiggle and squirm in excitement they should quickly remove their attention and treat him as if he doesn't exist. Then as soon as he's still, they can reward him with petting.

Expect immediate accidents the first few times because Piddles is used to his old routine—see friends, greet excitedly, and urinate. But, surprisingly, if all greeters stick to the new routine, the piddling problem might be solved in only a handful of sessions. Meanwhile, if you fear for the safety of your family's floors, you can hold the first few sessions outside.

Q) We own a beautiful whippet boxer mix named Matilda whom we got from the pound when she was 7 months old. When we got her, she was frightened of most people. We took her to dog school and have faithfully kept up with her training. She's wonderfully behaved and very happy and sociable. Our problem is that she's 4 years old now and she often pees when saying hello to people. There are a few people who Mattie loves to see but greets them every time by peeing and then flopping down into the pee and wanting to be petted. We really want to stop the peeing! What can we do?

A) Sweet, messy Matilda's not overexcited like the last case. By flopping down and piddling in joy, she's proclaiming her submissive status.

But submissive dog is not a bad thing. In fact it's the safe place to be. Gesturing this way to other dogs and to people who read fluent "dog" sends the clear message that she's no threat. However, add the bit about the piddling and it becomes a nuisance to humans. As with the piddling pup, we'll just change her routine, but in this case, instead of teaching Matilda to just be calm when petted, she'll learn to sit.

Although she undoubtedly know to plop her derriere down on command, we'll teach her to sit automatically in certain situations.

First, at home, take some treats and wait for Matilda to sit on her own. As soon as she sits, offer her a treat. When she learns to automatically sit for treats or a pat on the head, she's ready for her new greeting routine. You'll need to enlist some friends to help.

When Matilda runs to greet them they should ignore the flopping Fido. That means silence. Not touching or talking to her and no commands to sit. Any petting or talking will reward her for that undesired behavior. When she finally sits on her own they can give her a few pats on the head or a treat. Like Piddles the pup, start with short petting sessions and stop before she flops down again. Consistent follow-up and before you know it, she'll have a piddle-free greeting routine.

Adapted from an article originally published in the San Francisco Chronicle in 2001.