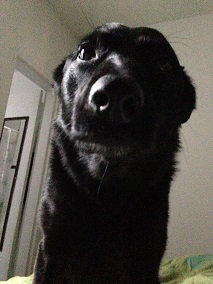 Here’s my dog Charlotte trying to get me out of bed one morning. If I didn’t know my dog and her intention in this moment (the context), I might look at this picture and think, “this dog looks worried!”

I have been seeing too many people misinterpreting a dog’s communication resulting in confused and worried dogs, frustrated humans, and sometimes even a dog bite. There are a lot of things I want to say about this but I will save it for future blogs–perhaps even a several part series. For now, I want to talk about a basic concept I like to call Parts vs. Whole when it comes to when the dog ‘talks.’

When observing what a dog may be saying to you, it is important to consider the whole picture; dogs communicate with their entire bodies, not just parts of it. This is similar to how people communicate with their whole face. Can you genuinely smile using just your mouth, or do the eyes also smile? And to make it a bit more complicated, the context of the situation influences what the dog may be saying. A dog I had named Charity, a 30lb. Staffordshire cross, often went belly up when meeting a new dog. Most people thought she was being submissive to the new dog, but in fact, it could have meant one of three things: she was, in fact, deferring to the new dog saying “you’re in charge, buddy;” she was inviting the new dog to play by immediately showing him that she is not a threat; or she was not interested in the dog so she is attempting to disengage in a passive manner. What a fluent pup I had! And usually, Charity was communicating the latter of the three options.

The same thing goes for humans. A mantra I say to people, especially kids, is “a belly up doesn’t necessarily mean a belly rub.” Just because the dog is exposing her belly doesn’t mean she is inviting someone to bend over her and rub her belly. She could in fact be offering what’s called a TAP OUT. Just like the wrestling move, she’s calling “mercy!” and asking the person to back off. You can tell the difference of whether it’s an invitation or a warning by the way in which the dog offers the belly up position. If the dog’s body is 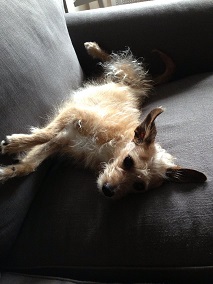 My dog Tricky is belly up, but she is not inviting me in for a rub. This is her sleeping position after a long run in the park. Always remember context when the dog is communicating.

wiggly and the face looks relaxed and has an open mouth, the dog is likely inviting a belly rub. If the dog’s body is tense and the mouth is closed, she is likely asking for space. The dog in the latter example will likely have wide eyes and even a tucked tail. They also tend to TAP OUT when they don’t want to be touched. As soon as this dog has space from the human, she will likely move away.

Back to parts vs. whole. There is a common misconception that a wagging tail means a happy dog. That is not the case! The tail’s position and movement, indicate what the dog may be feeling at that moment and that’s not even looking at the rest of the body to understand the full picture. Be sure to read the entire body to get a comprehensive understanding of how the dog may be feeling. A position of an individual part of the body could mean a few different things. If you combine that body part position with other body part positions, in addition to looking at it within the context of what’s going on, you will better see how the dog feels.