Martin Seligman was instrumental in identifying learned helplessness in dogs at a time when it was very unpopular to consider that dogs might be able to think and have expectations.

The research on dogs was followed by research on people. Of course people could be interviewed, whereas dogs could only be observed.*

In his book, Learned Optimism - How to change your mind and your life, Seligman discusses the experiments, which had three groups.

When members of all three groups were put into a different situation in which they could escape/ turn off the shock or the noise, the subjects from groups 1 and 3 took action and worked out how to end the experience. Most of the members of group 2 did not even try to escape/ turn off the unpleasantness. Even though this was a new situation and their behavior could have made a difference, they didn't even try to take action.

Note that I said most members of group 2 became helpless. Some subjects - dogs and people - never developed learned helplessness. These became a new subject of study. It turned out that they had a form of 'immunization' against helplessness. 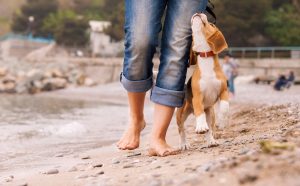 Learned helplessness became regarded as a 'model of depression' because it shared most of the symptoms of depression. "It was caused by experience in which the subjects learned that nothing they did mattered and that their responses didn't work to bring them what they wanted...Defeat and failure generated the same symptoms as uncontrollable events." (P.67)

The methods used to treat and prevent learned helplessness, also worked with depression.

It turns out that, in people, pessimistic thinking and rumination have strong links to both learned helplessness and depression. A pessimist tends to see a loss/ error/ failure as permanent (it will always be like this), pervasive (I can't do anything right) and personal (It's all my fault.) Rumination adds to the problem because constantly chewing over these thought patterns, keeps them front and center in the mind.

We can't do cognitive therapy as such with dogs, but training optimism as a concept is gaining popularity and it makes complete sense (especially to 'immunize' malleable young puppies). However, we must be mindful that the concept of optimism which Seligman and others propose, isn't only about positive experiences and making things fun. (Positive thinking on its own, hasn't been found to be useful at preventing or treating depression in people either.)

Developing optimism involves many positive experiences, but also fair challenges (so the dog can practice successfully stretching its comfort zone, working through manageable difficulties and recovering from failure to try again). It also entails giving the dog some level of control over their environment. These things develop a sense of agency and resilience, so that when the going gets tough, which at some stage it inevitably will, the dog is more likely to have coping strategies and the ability to bounce back more quickly.

This is why it's so important for us to develop our observation/ training skills. We need to pitch our lessons at the right level for the individual dog and recognize that situations can change in a heartbeat. With the best of intentions, we can push too far, too fast. For example; I have watched people interacting with puppies, then suddenly, the pup tried to opt out. The human wouldn’t let them do that. They insisted the puppy give them attention, accept handling, play etc. That’s not teaching a puppy that they have control. Perhaps there is a good reason that they need a break at the moment - and we might need to honour that. (Similar observations have been made when studying human adult/ baby interactions. Sometimes the baby will need time out and the adults don't always realise and allow that.)

We can set up circumstances and stay alert to opportunities to develop optimism if we understand that it requires a mix of positive experiences, personal control and manageable challenges with recovery.

It's a valuable concept we could all be making use of for ourselves, our families and our animals.

*Being an animal lover, Seligman also only used dogs for research because he believed the research could be so valuable. He also stopped using dogs as soon as he had the information he needed.

Sidenote: Trauma is a different thing from 'normal life difficulties' and can have a serious impact on anybody, but optimistic thinking is more likely to help someone recover from extreme life circumstances, and even find ways to grow as a result.

More about Diana More Articles from Diana
JOIN THE CONVERSATION