Well, that's a bit like saying that only 'bad' people shout in frustration when someone drives inconsiderately and nearly causes an accident or only 'aggressive' people have disagreements with their partners/ family.  For some reason, it’s considered normal and acceptable for humans to express our disappointment, frustration, anger, annoyance, fear or upset at times in life but, sadly, not so with dogs.

In many cases with dogs, we seem to have completely unrealistic expectations of what they should tolerate and, on top of that, even more unhelpful ideas about what they should do if they’re unable to tolerate something. 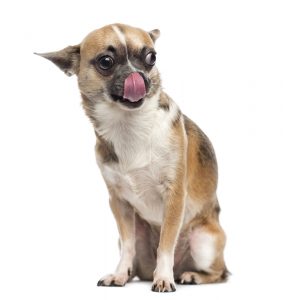 What is often missed is the dog who is not happy with what is going on but is asking ever so politely if we wouldn't mind stopping that now please!  The subtle signs of communication (head turns, whale eye, lip licking, yawning etc.) easily go unnoticed and so the dog has to ask more forcefully.  They growl or show their teeth, or snarl, or snap.  Ultimately, all dogs would reach this point in certain circumstances; it’s just that the specific contexts and tolerance thresholds vary between dogs.

It is totally understandable that people tend to be shocked and disappointed if their dog growls at them.  Sadly, this often leads to the dog being punished in some way.  Not only is this an issue on ethical grounds (the poor dog is still not comfortable with what is going on and now his trusted humans are angry with him too!), it’s also potentially going to cause a problem in terms of the dog's behaviour going forwards.  If we punish a growl, we run the risk that the dog might not bother growling next time (the dog has learned that it doesn't 'work' and it makes the humans angry) so, instead, they go straight to snapping or biting. 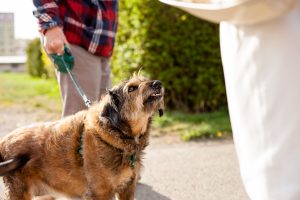 A growl is a warning: a message that the dog is uncomfortable. It does not make them a 'bad' dog or ‘aggressive’: they’re simply telling you how they feel in a way that you will listen.  So, if your dog growls, just stop whatever you are doing and give them some space.  Think about what signs you might have missed that your dog was unhappy, before the growl.  Reflect on what prompted the behaviour so that you know what you need to work (or simply avoid, depending on the situation) in the future.  Don’t tell them off or you might not get such a good warning next time!

Being able to read your dog and listen to them, without them having to escalate to growling, is such an important skill for a great dog-owner relationship.  The University of Edinburgh has produced a great (and free) video guide to the canine ‘ladder of aggression’ which you can see here: https://www.coursera.org/lecture/cats-and-dogs/dog-aggression-Xhcu0

And the wonderful Lili Chin has recently published a beautiful little book called ‘Doggie Language’, which is well worth a look: https://www.doggielanguagebook.com/

Finally, we should be aware that the other worrying downside to labelling dogs as ‘nice’ or ‘bad’ is that if we believe we have a ‘good’ dog who would never growl or snap, we are more likely to put them in the very situations that might just push them too far… with dreadful consequences.

Gretta Ford is a VSPDT and Clinical Animal Behaviourist, living in North Yorkshire, UK. She is passionate about helping dogs and people enjoy happy lives together.