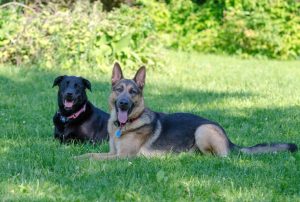 Veterinarians assumed, based on symptoms, it was the dog flu that is still spreading through Bozeman, MT. And it’s happening in epidemic proportions. Imagine over 200 sick dogs in a community of 40,000 people. Dr. Jarrod Moss in Bozeman estimates that that 20 percent of community’s dogs became ill, and some died.

Moss says, “I haven’t had a dog die at any of our practices (he has three), but according to colleagues some have died. This is very infectious.”

Other nearby states are now reporting similarly sick dogs.

What’s going on? Is it the dog flu? Actually, according to experts at both the Cornell and IDEXX labs, the answer is no, it is not the dog flu.

Then what is it that is sickening these dogs?

Edward Dubovi, Cornell Director Virology Section Diagnostic Center, said only that only a handful of the samples came up positive for dog flu or canine influenza virus (CIV), and at that a very low positive value. “It looks like flu, it smells like flu, but I don’t know that it is flu,” he says.

The tests at diagnostic labs focused on any influenza A-type virus, and came up short – except for those two barely positive results which are described as “borderline.” Could it be a B-flu (a human flu)? “Not likely, it’s not shown up in dogs before,” says Dr. Chrstian Leutenegger, director of Molecular Diagnostics, IDEXX Laboratories.

There are actually different strains of H3N2 (dog flu). Could the strain that was introduced to Los Angeles from dogs at a Chinese meat market earlier this year (which differs from the strain of H3N2 originally introduced into Chicago from South Korea in 2015) go unidentified? Also, interestingly, even the original H3N2 strain that entered the U.S.in Chicago has evolved. Could current testing technology miss these changes in H3N2? “Good questions,” says Leutenegger, “But very unlikely.”

Asked about a long line of “usual suspect” infectious respiratory diseases that might be the cause, Leutenegger says none have been identified. The IDEXX panel is inclusive, covering 11 infectious agents.

Something is definitely going on in Bozeman, it’s infectious, and it’s happened fast. “People in our community love to hunt and fish with dogs, and they hike trails, and meet other dogs,” says Moss. “Most stores downtown allow dogs, and have communal water bowls. People board their dogs here too. All this helps support the spread of CIV.”

While mimicking CIV, perhaps even spread as CIV is contagious - its apparently not CIV sickening dogs. Or at least most dogs. Making matters even more complicated H3N2 (strain of dog flu) has been identified in the state – and it might be some of the dogs have indeed had the dog flu.

The search continues, as IDEXX tested for an additional six infectious agents including the recently discovered canine polyomavirus, which have all been ruled out.

IDEXX lab-testing is now being focused on “zebras,” looking for something totally unexpected. How about a canine retrovirus? For years researchers have attempted to isolate this possibility. After all, if retroviruses appear commonly in other species, why not dogs? “At the bottom of the list,” Leutenegger says and laughs.

Maybe it’s not even a virus – but instead a fungal disease. “Highly unlikely because whatever is going on is acting like a viral infection,” Leutenegger says.

So what is the mysterious cause of all these sickened dogs? “It may be that we have another new virus,” says Leutenegger. “We don’t know what we don’t know.”

And, to date, no one knows. Certainly, veterinarians are telling dog owners in Bozeman to stay away from other dogs, and also to vaccinate for dog flu. After all, even if most dogs aren’t getting flu, CIV does occur in Montana. And because dog travel so has this mystery virus.

According to the Orlando Sentinel, the recent outbreak of canine influenza virus has led to the closure of at least four Central Florida dog-boarding and day care facilities, so far. Veterinarians believe there are likely many facilities that know they have flu, but attempt to keep what they know quiet, manage the fall out and remain open.

Veterinarians, including Cynda Crawford DVM, PhD and Julie Levy DVM, PhD at University of Florida College of Veterinary Medicine have called for complete transparency, rather than facilities keeping their doors open knowing darn well that they have flu.

Some boarding and day care facilities have had 30 to likely over twice that many cases of dog flu, according to various printed reports. At least one boarding facility, called Woof, did close its doors for several days, pointing out that it was the responsible thing to do.

The boarding association, the International Boarding & Pet Services Association, at least provides education and certification, and encourages working with local veterinary professionals. But they don’t mandate vaccines. And unfortunately, many kennels and daycare's aren’t even a member of this association.

Of course, if dogs are required to show proof of CIV vaccine (including the booster) before being boarded or allowed at day care, far less flu would occur in the first place.

There are additional “hot spots” of sporadic H3N2 throughout the U.S. And in Chicago H32 dog flu exists and is going nowhere. The truth is that positive lab results are likely only a drop in the bucket or the tip of an iceberg. After all, most dogs suspected of dog flu are not tested.

While most dogs don’t require hospitalization as a result of the flu, plenty do. And three to five percent may die. The percent is small but consider this: In 2017, likely well over a thousand – perhaps thousands of dogs sickened as a result of the flu. If only a thousand have been sickened (and likely the number is at least twice that), it means conservatively at least 30 to 50 dogs have died. And helping to enhance the spread of CIV, around 20 percent of dogs never display any signs of illness but they do spread virus. Their owners have no way to know their dog is contagious.

“That’s one reason I am for vaccination,” says Leutenegger. “Inoculated dogs don’t shed much virus. And even if the vaccine doesn’t prevent infection, the vaccine ameliorates clinical signs and makes it very unlikely the dogs advance to pneumonia, and therefore vaccine reduces deaths.”

Dubovi adds to remind clients to be proactive and understand that a booster is required (about 3-weeks after the initial shot) for the CIV vaccine, and therefore plan before boarding or traveling with their dog.