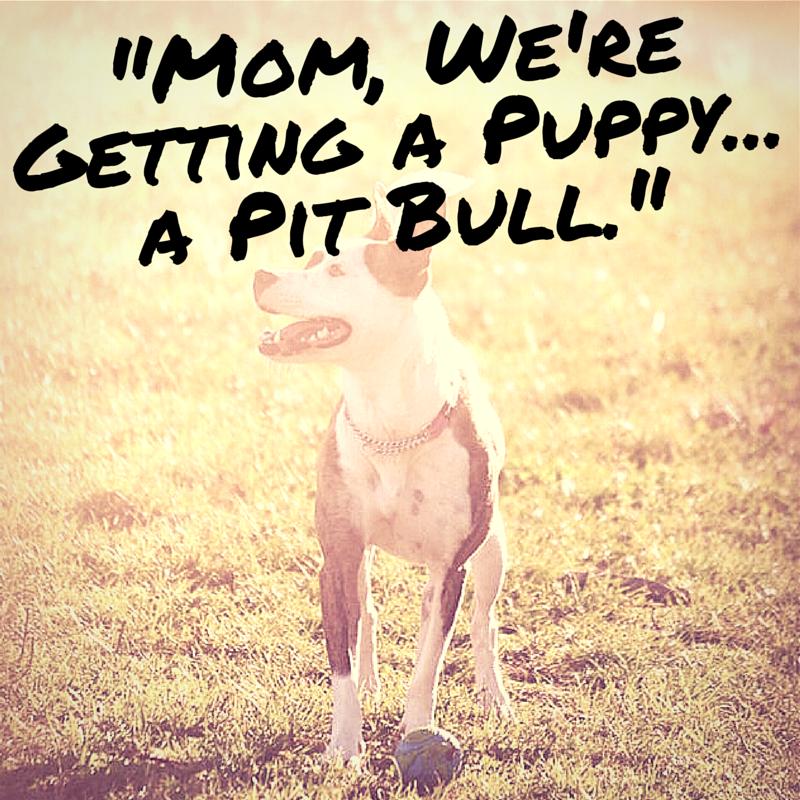 A while back I was reading a blog post (via My Two Pitties) about the moment she told her mother that she was getting a pit bull – and I couldn't help but notice how it was so very similar to our story.

I will never forget the first time we met Lola. She was this tiny, naughty little puppy who wanted nothing to do with you holding her (and all we wanted to do was hold her). We weren't even looking for a dog (imagine that) but she basically fell into our lives and we quickly decided she couldn't leave.

We had taken one photo upon meeting her which was the photo that we began to show everyone and brag, “Guess what? We’re going to get a puppy!”. 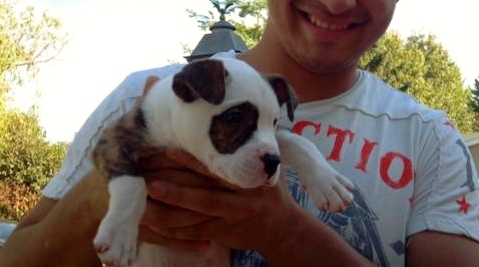 I will never forget the first few reactions we had that were rather surprising. One of the first people we showed the picture to was my mother. Her reaction was not quite as warming as I expected.

“Oh, honey…a pit bull? She’s cute and everything but I could never trust a pit bull.”

I began to defend this tiny little pit bull puppy I barely knew and couldn't understand, “She’s just a dog, mom, we will take perfectly good care of her – there won't be a problem…”

She went on to say that she hopes it will all be okay, knows that we're responsible but kept reiterating the fact that, “You just never know, I don’t think I could ever fully trust one”.

I received a similar reaction from a coworker who saw the picture and said, “Oh, a pit bull, huh?”

“Yep! Isn’t she adorable?” I piped in, not even feeding into the tone behind his voice.

My dad on the other hand wasn't as concerned about us getting a pit bull, but just a dog in general.

He would make comments such as, "They're a lot of responsibility, you have to think about what you'll do with them when you're not home...".

And my dad is right, dogs are a lot of work. But totally worth it.

Quite honestly, before owning a pit bull I had no idea how many people felt so strongly and adopted stereotypes towards this breed. This “breed” that is really an umbrella term for multiple breeds of "bull" dogs. I had no idea.

My first experience with a pit bull was with a friend in high school. I thought nothing of it. She was a great dog and accompanied us while playing Nintendo. I didn't care or think twice about her breed and in fact, I had to ask him what kind of dog she was because I was so attracted to those soft, round eyes, the short coat, broad head and muscular little build.

The one thing I will tell you, as I'm sure every pit bull parent can probably reassure – I did not exactly choose advocacy. Based on the type of dog we now had, I was involved in advocating for the "pit bull",  like it or not.

Fast forward nearly three years, I have become a strong pit bull advocate. I started a blog because of our pit bull. I found an entire network of dog friends because of our pit bull. Our pit bulls (we now have two) have literally changed my life and I wouldn't change a thing. It is a constant learning process, as is life, and I plan to build my impact in advocating for these dogs.

And I’m sure some of you are curious. The relationship between my mother and our puppy (who is now almost three years old)? Priceless. Lola loves her grandma more than (just about) anyone. And the feeling – well, it’s mutual.

Have you had a similar reaction when bringing a new dog into your family? Did perceptions change over time?