Making the Best of Small Spaces for Dog Agility – Part 3 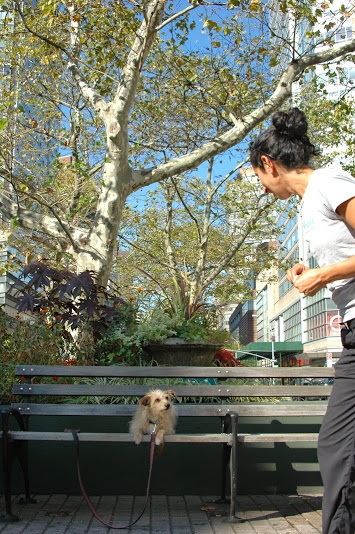 Read Part 1 and Part 2 of this series.

Folks who do agility usually have the space to practice and play the game. This generally includes a house and a yard. For some of us, that isn’t necessarily the case. We still want to play the game, but we have to be a little more creative to make our situation work for our passion. While I enjoyed living in my New York City apartment, I missed the ease of agility from my days in a house with a yard full of equipment.

In the third and final part of this series, I will share some of the games I played that involved actual equipment, as well as the foundation equipment I used to build behaviors and understanding. The amazing thing about agility is that revisiting and reinforcing foundation skills improves and sharpens the dog’s overall ability. This worked for Tricky, my Masters level dog. Because my other dog, Marvel, was so young at the time, everything was new to him. The bottom line, regardless of age or level of understanding, it is all about value-building. Think of it like funding a retirement account: the more you invest into it (the more you practice and reward the dog on a regular basis) the better your returns will be (the more responsive your dog will be to you).

As I shared in parts 1 and 2 of this series, there was a limit to the amount of equipment I could fit under my bed. Much of the jump and technique training I did was on one and then two jumps. My focus was less about handling and more about teaching understanding and building value.

Tricky had already been trialing for a couple of years so I used the One-Jump training as an opportunity to practice the new handling moves I had been learning. Marvel was my baby dog, so he was learning obstacle understanding and how to drive a line. Both dogs learned about commitment and collection. I spent a lot of time building value for how they collected and how they drove out of a turn. I also spent time working on commitment so that I could move out of position and up the line much sooner.

I also worked on teaching lateral distance and backsides (Tricky understood these already so again, it was just about value building and showing her challenging angles). A fantastic way to teach lateral distance is the pointing game. All you need is one jump and some space. My dog had to take the jump I pointed to, regardless of how far I was. This was always fun to do at the park because park-goers often paused to watch us in action. Built in audience! Our audience included everyone from nannies pushing strollers, kids on scooters, couples walking hand in hand, to people walking their dogs. At one point or another, they all stopped to watch us train various jump games. Built in distraction training!

My Wobble Board, Mini-Teeter and Travel Plank are all homemade and have lasted now for 8 years. They made several moves with me, including the one into New York City. They easily stored under my bed and were perfect tools to use during my urban days. I often brought them out during Marvel’s dinner time to play.

Tricky was already comfortable on the Wobble Board and Mini-Teeter, but she enjoyed participating nonetheless. Why should baby brother have all the fun?! The Travel Plank was key in maintaining her stopped contact skills. A dog does not need to go up and over the entire contact equipment in order to maintain their understanding of the end behavior. It is important to preserve the dog’s body –by not putting the dog up and over the whole piece of equipment to work one part will be easier on the dog in the long run.

When working the end behavior for a stopped contact, so much can be taught and maintained using a Travel Plank. I literally travelled with this plank! I hopped on a subway with Tricky in a pet travel bag and plank in hand. I propped it up in various parts of the city and worked on target training. Tricky was taught to nose touch at the end the Teeter and Dog Walk. Working in different environments provided a wealth of distraction training. And we always had an audience. We probably could have put out a cup to collect money for entertainment!

Another skill that can easily be trained in a small space is Crate Games. And from those games, so many skills can be taught. Marvel learned impulse control, how to Sit-Stay, focus on me on lead outs, to drive to me when released, drive away from me, and angles of entry. He also learned a verbal directional cue using the crate. It will be useful when I will need him to turn away from me off a contact and into a tunnel. And a huge bonus of these games was my little puppy terrier learned to be quiet in his crate—very important for apartment living!

I was also able to store two sets of 2x2 Weave Poles (4 poles and 2 bases) under my bed. By this point in this three-part article, you might be thinking I had a California King bed. Nope! I had a Queen. It kind of looked like Tetris under there! I only had 4 poles so I focused on working entries and distraction training. This made it possible for Tricky to be reinforced immediately after performing the behavior which, strengthened her understanding for difficult entries. When I visited my parents or attended a class, I was able to practice on a full set of weave poles.

Putting the Pieces Together

Agility is a game of many behaviors chained together. It can be exhilarating to run an entire course with your canine counterpart. But before that can happen, there are many pieces that have to be put into place. Space, or lack of it, does not have to be a reason you can’t play agility. After living in New York City, I’ve learned to make the most of the space I had. Don’t let living in apartments or having small backyards limit you from playing big!