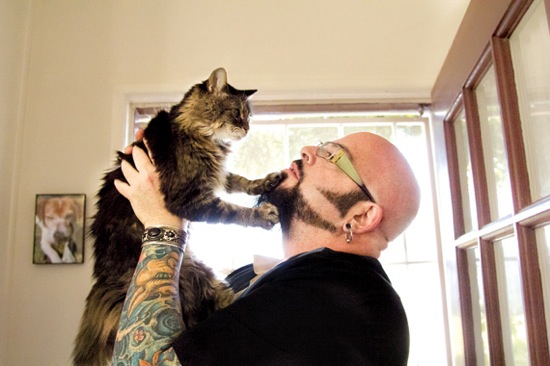 The first time I met Jackson Galaxy, host of Animal Planet’s “My Cat From Hell,” it was on the set of a TV pilot for a reality TV show. At that time I was on the Board of Directors of the American Humane Association, the folks who designate ‘No Animals Were Harmed.’ Galaxy had been working with animal shelters in the area and he was hired as independent voice to watch over and wrangle cats for the TV show.

The TV pilot was for a game show featuring cats.

The show was never picked up, which was not a shocking development.

But a benefit of the experience was meeting Galaxy. I recall that he picked my brain a lot regarding environment enrichment for indoors cats, providing outlets for their natural behavior. It remains today a topic I speak and write frequently about.

Simply offering these outlets can prevent lower urinary tract disease, lesson the odds of obesity, prevent or delay the onset of feline cognitive dysfunction syndrome (“kitty Alzheimer’s), and much more. With more resources, inter-cat aggression may be prevented or at least the intensity can be dialed down. And as significant as any other benefit, cats seem to thrive in enriched environments.

The topic of Galaxy’s latest book is “Catification: Designing a Happy and Stylish Home for Your Cat (and You!)” (Jeremy P. Tarcher, Penguin, New York, NY, 2014; $21.95) with co-author Kate Benjamin. The book is about understanding and then (literally) building what cats need.

“Cats are emotional beings, and they require stimulation – every day,” says Galaxy.

He continues as only Galaxy does – with his own language., “I go into boring homes, where there is nothing for the cats. As a result, over time, they lose their inner cat and their mojo or territorial confidence. So many people who love their cats have no clue that they’ve unknowingly participated in stripping away the raw cat.”

The good news is that mojo doesn’t need to be gone for long. Mojo is an easy thing to bring back. According to Galaxy, the recipe for magical mojo return is, “Catify the home, enrich the environment by meeting the needs each cat requires, including places to hide, places to call his or her own, places to observe others and new things to explore.”

Galaxy says, “Cats are predator and prey – a plank on my cat platform for cats is to encourage confidence hunt and prey, as long as they keep in touch with a potential predator and feel safe it’s okay. As an example, when we’re catifying, we talk about the cat superhighway as a way for cats can get around the room without touching the floor.”

Co-author Kate Benjamin, who is an interior designer – now dubs herself as a cat-style expert. She adds, “The book offers both easy and inexpensive, as well as more complex means to achieve the goal of simulating the lives of indoor cats.”

Some of the catification plans are complex (but as Galaxy points out also the “epitamy of cool”) that they require architectural blueprints.

“I needed to both consider functionality and, of course, safety for cats, as well as, how does it look for the people who live there,” explains Benjamin. “One goal is to demonstrate that you can enrich your cat’s life without turning your house into the crazy cat lady’s house.”

Cat superhighways can be created using existing furniture, or by making platforms, walkways or shelves for the cats to walk across and perch on.

For example, you can create a “wall scratcher,” transforming an entire wall or a portion of a wall into a scratching post by using carpet tiles. Benjamin says to simply cut the tiles to fit the area, and use a non-toxic adhesive to attach the tiles to the wall. You can create decorative tile patterns to match your home décor from very modern and whimsical to vintage.

The wall tiles aren’t expensive – even less expensive is using a cardboard box as a cat hiding place. “Kids can help build these projects, like creatively making the box to look nicer than a plain box by using wrapping paper,” Benjamin says. “When you get tired of the box or it gets beat up, just toss it.”

Galaxy is certain that cats benefit by living in catified homes, apartments or condos. “When cats live in enriched environments, by definition they explore more and receive more physical exercise and mental stimulation; they are less likely to have behavior problems. I can’t stress enough how important this is. “

Benajmin adds, “Hopefully, the book is only a start. It’s a misconception to think that cats don’t need or want a thing beyond four walls. We explain what all cats need, and then offer ideas on how to meet those needs. The hope is that we trigger a new way of thinking. The only limit to what people can do is their own creativity. Catification is creative and fun.”