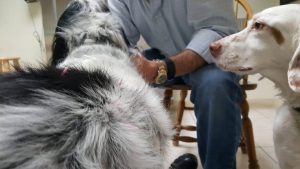 There is no lack of division in the dog world; training methodologies, training tools, cropping and docking, spaying and neutering are but a few potentially explosive topics. Complementary therapies however, are way up on the list of hot buttons to discuss. One person mentions something that even *might* fall into that category and everyone else gets some popcorn and sits down to watch the ensuing battle.

I once witnessed an exchange on Facebook that included the phrase “the blood of woo woo was in the water” all I could think about when I read that was that the blatant lack of respect for what works for some people/animals, but doesn’t harm anyone at all, is epic.  Some threads can immediately erupt with full on combat with just the passing mention of things even so widely accepted as chiropractic care. Batten down the hatches and put your flameproof suit on if you even dare to discuss something like flower essences or essential oils, which some studies actually support.

Lest I be misunderstood, I am heartily in favor of complementary therapies. Let’s get that out of the way right off so you can decide whether you want to continue reading or not. Complementary therapies are very widely used for a very good reason. They work. And many have worked far longer than western medicine has been around. It is your prerogative to include them in your life or not. This article’s intent is to clarify what most people who use these do, as well as to ask for simple respect for other’s decisions and competence.

Personally, I don’t believe in *just* using complementary therapies. After all, they are called complementary because they are. Alternative therapies are just that. I prefer a well rounded approach. I am open minded to each end of the behavior modification spectrum, both well documented by science and yet to be documented (or even impossible to document) by science. My goal is first do no harm.

I am very supportive of behavior modification medication and have no problem suggesting that a client discuss that potential with their veterinarian if I see the need and I often do. Some of my colleagues likely think that I am too supportive of traditional medication. I disagree. I just don’t see a reason to stop there when there is additional behavioral support available. It would be wonderful if the dog behavior community would support one another’s choices (that aren’t harmful to anyone), regardless of whether they share those choices. There is plenty of backup to support that it often takes science years or even decades to prove things that many people have known for a long time. And quite frankly, some things are never going to be the subject of a study for various reasons. Those reasons can range from the fact that the modality is impossible to study in a controlled environment or the modality is not something that anyone is going to financially back a study for. 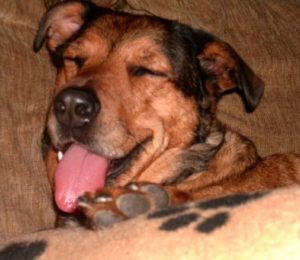 There are many very mainstream modalities that seem to be thought of by someone somewhere as “woo woo”. Sadly, chiropractic care seems to be suspect by some, despite the fact that chiropractors get as much training in their field as many doctors. In addition, chiropractic care is often covered by both human and pet insurance companies. Never having personally gotten a chiropractic adjustment, I cannot speak for the benefits for humans but I certainly hear plenty of friends regularly rave about their own chiropractor. I have, however, had my dogs adjusted by the most wonderful dog (and human!) chiropractor in this area. My late beloved Siri was given far more mobility and comfort in her final years on this earth, courtesy of her regular chiropractic visits. A dog that was never fond of strange men touching her, especially from behind, she leaned into “Dr. Dave”, as he is fondly known by his fans, with a sigh of relief at how she felt, at her very first visit. Her entire body wiggled with happiness every time we pulled up to his office. How anyone could call that quackery confuses me completely.

The list of complementary therapies can be endless but I will mention some of the more commonly recommended and used ones here and mostly avoid the ones most frowned upon by the masses. I say mostly avoid because I think it warrants a mention that homeopathic labeled offerings seem to have the widest swathe of haters. I wish I could pinpoint why exactly. There are millions of people who not only use homeopathic items regularly but also quite successfully. I personally have never been a believer but I have certainly tried a couple of homeopathic options on both myself and my dogs, with very limited success. Only one product has ever worked for me actually and it’s topical, not internal. I don’t personally ever discuss homeopathic products with a client unless they ask and even then, I know little about them so I would refer them to an expert on that subject.

But that doesn’t mean that I would think poorly of another behavior consultant/trainer if they chose to suggest homeopathy. As long as everything else is covered by way of the usual appropriate for the situation protocols, why would I? It’s not my business nor is it my concern. And it shouldn’t be yours either. Mind your own business and don’t tell others what to do or not, just because they choose to use a holistic approach. Holistic means whole. This should be a good thing! This should not make someone a target of ire by others who deem themselves the modality police. There is enough division in this business. Let’s not add to it. Respect should be the order of the day with those who are making enough of a mark in this industry that their work is known by others. Those of us who choose to work with clients using a rewards and relationship based approach supported by modern dog behavior knowledge have to learn to treat each other the way that we all want to be treated. Or better yet, how we treat the dogs that we work with. We are all working for the same end goal. It’s okay that we are not clones, really it is!

Here are some of the results of my informal survey of what holistic options other rewards based behavior professionals use. There are others that can be considered holistic but these are the ones that were mentioned. I am placing a star next to the items that I personally have used or have mentioned to clients:

-Reiki and other energy work

I want to touch on personal belief systems. That subject was mentioned when I asked about holistic modality use. I personally believe that belief or lack thereof can make a difference in results but probably not in the way that you would expect me to state. I think that a strong lack of belief can inhibit seeing results just as I think that an over-exuberant belief can enhance or create false results. I think the best results can usually be seen when someone has an open mind and is neither a strong disbeliever or vice versa. As an example of what I mean, I love Flower Essences. I use them and I offer samples to clients to try. But it’s not a matter of me handing someone a bottle and telling them that this will fix everything. Everyone is an individual and that includes dogs. There are always several formulas to try. Sometimes we get lucky with the first try and sometimes we try three or four until we find the right one. There is no magic wand. But people who are open always know when they have hit upon the right formula. It’s just obvious with their own skilled observation of their own dogs. That is not in any way a placebo effect. It would not take more than one trial of whatever I handed them to achieve that. So please just stop with those assumptions.

Previously, I mentioned that I have had limited success with homeopathic remedies. I am a fairly strong non-believer in them. But that did not stop me from trying a topical Arnica gel that a friend once sent me that she had received for free courtesy of a coupon. I had a badly bruised bone in my leg and nothing was helping with the pain. I had nothing to lose by trying this product. Amazingly, it worked! It’s now my go to for any kind of muscle/bone pain or soreness. I love it. That doesn’t change the fact that the other homeopathic products I have tried for myself or my dogs have been a huge fail. Would I try another homeopathic remedy? Probably, but with suspicion combined with hope. And that’s okay.

It’s important that I reiterate that those of us (and there are many!) who use or suggest any of these products are not in any way an extremist. That’s just not an accurate viewpoint and that assumption needs to stop right now. It’s inappropriate and it’s just as I mentioned earlier in the article, quite simply none of your business. Most of the professionals who utilize holistic/complementary options are just like me. Anything we might suggest that falls into the category of a complementary therapy gets used along *with* all of the documented behavioral modification science including if warranted, a trip to the veterinarian to discuss possible medications.  We *are* doing our jobs, thank you very much. So learn to keep your judgments and declarations of your perceptions of our skills to yourself please. We can all do our jobs slightly differently and still do them well. Respect, we all deserve that.