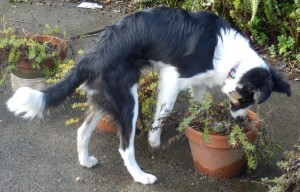 My puppy investigating pot plants in our winter garden.

Information seeking. People and dogs do it all the time. We aren’t necessarily aware that’s what we’re doing, however recognizing it can be really useful.

I’m sure you’ll instantly see parallels between human and dog behavior. There are also obvious differences. We have language to ask questions, however, like dogs, humans often show information seeking with their behavior (think about how babies stick everything in their mouths; teenagers investigate fridge contents; people flirt etc).

When we watch our dogs using their senses to explore new places, animals, people, foods, objects etc, we’re seeing information seeking behavior. When they are trying to follow our instructions or solve a problem in training, we might see it too. A dog sniffing the ground, then leaving agility practice to drink – may just be thirsty and seeking information about the whereabouts of water, but may also be seeking relief from stress. The dogs do what they do. We have to learn to interpret and use it effectively.

When I last visited my parents, my dog stood on the porch, air scenting, before barking loudly a few times – clear, distinct barks. The neighbor’s dog responded with similar barks. My dog then came in the house and neither dog barked again. It was as if they had established who was there and that there was no cause for concern. Information sought. Information exchanged. Need ‘satisfied’.

As a means of communication, ignoring behavior has its place. It can be effective, both accidentally and purposefully. However it has its pitfalls too. When our cellphone beeps and we instantly zone out the person we’re with; or we turn away from our focused dog to talk to somebody; or we suddenly become very hard to contact, the person or dog may follow up with information seeking behavior, (Hey, what was that about?); but they also may not. We may not have even noticed that we were ignoring them or thought about the negative effects it may have. They may do some ignoring of their own and we may be the ones left seeking information about why our relationships are suffering!

With dangerous (e.g. cat chasing or biting) or self-rewarding behavior (e.g. tail chasing) ignoring at best, is likely to be ineffective. At worst, it enables the animal to practice a behavior you simply don't want them to get any better at performing! You are being given information that you may not have sought, but use it anyway!

When teaching children I have often found that ignoring yelling out doesn’t work because sometimes the yellers don’t realise their shouting is being ignored. They yell louder and longer in an extinction burst of information seeking behavior as if they’re asking – Can she not hear me? Why isn’t she answering? Explaining what behavior I want instead, and why I won’t respond to yelling, is much more effective, much more quickly.

My older dog who can be dog reactive will at times snarl and snap at dogs even when she has just sniffed noses quietly. This has been described to me as ‘threat assessment’ – a form of information seeking. I’ve often felt she relaxed more quickly when the other dog snarked back. Perhaps dogs that don’t react may still seem to show a level of unknown threat, while the dog that snarks without damage is showing self control and limited threat. Puppies also benefit from an adult who will respond to annoying behaviour quickly, clearly and safely.

My current puppy showed many behaviors which I decided were a sign of information seeking. She was very quick, unpredictable and aroused fast. My skills were rusty and my training habits of silence/ watching, marking right and ignoring wrong behaviors, weren’t making the progress I wanted.

She had several ways to ask “Will this work?” “Is this what you want?” “What do you think of this?” and “What the heck do you mean?” Most of those questions involved biting, barking or bouncing off me. Not much fun (for me anyway!) Through trial and error, I have found that she needs me to talk to her.When I began to deliver feedback more quickly, consistently and regularly; using praise, a clicker, keep going signals and at times an NRM, she learned more readily and her questioning became more socially acceptable. She just needed information to be delivered more clearly, and more often. At 6.5 months now, the information sharing process is ongoing!

More about Diana More Articles from Diana
JOIN THE CONVERSATION