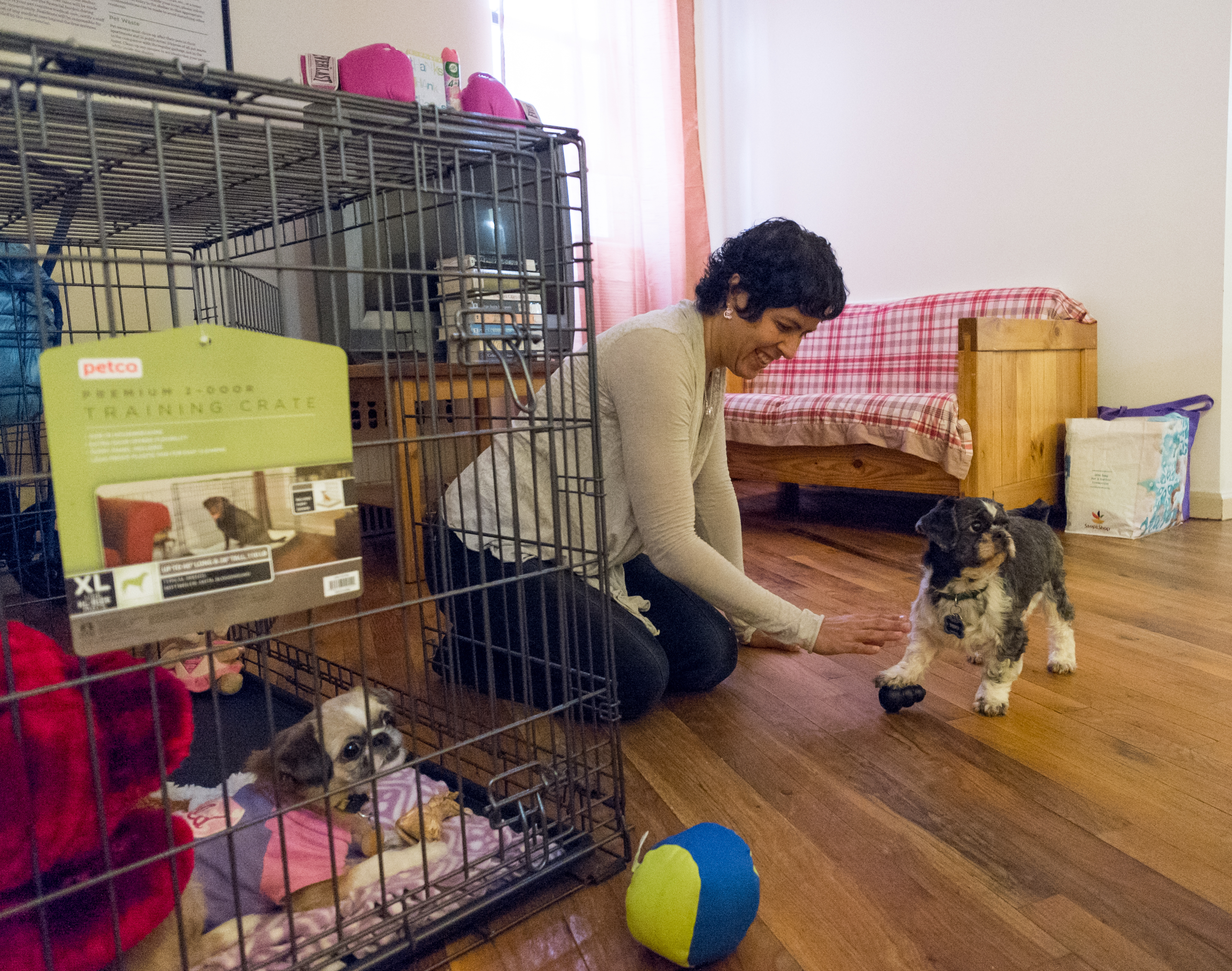 Rivera and her two dogs.

Rivera spoke last fall at a Roundtable announcing the URIPALS white paper on how co-sheltering with animals works. I moderated the event, which included experts in the fields of domestic abuse and animal welfare from around the country, but Rivera’s story had the 150 or so professionals in the audience in tears. Unlike the academics, public officials, public policy advocates and others in the room, Rivera lived it.

“I was in an abusive relationship for 18 years,” began Rivera. “I can’t say I didn’t understand the type of relationship I was in, I did, but only to some extent. I was very young and very naïve. But it all changed for me when Tony and Theresa came into my life. I wanted them to be safe,” she said.

“Tony, my first ShihTzu baby, is the oldest, now 5-years old. Then came Theresa, another Shih Tzu. I was so happy to have other beings in the house. And of course, I gladly accepted their unconditional love.

“I tried to take the dogs with me whenever I went out, as I began to fear for their safety. I feared for their safety more than my safety – things were never good – but I didn’t realize how bad it would eventually get.

“I know people who never experienced abuse don’t understand, but living in fear was my normal. I was getting ready to go to work, to go to teach my class. And of course something happened, and it was really bad, but even then I didn’t call the police after it happened. I just said, ‘Okay, I’m going to leave for work.”

“I was getting my stuff together, I was in a very bad mental state, I was crying and frantic and looking for my stuff and I’m looking for them (the two dogs), because everywhere I go they’re like two little shadows, two beautiful little shadows. I always see them. And I didn’t see them. I’m like where are they?

“I cried out, ‘Tony and Theresa’ – and out they came from under the bed, shaking so much. I realized I was looking into a mirror. At that moment, I thought, ‘What am I doing to myself and to my babies?”

“Still, I had to go to work – I did. Later that evening, I went back again to get some more of my stuff, and sure enough it did get worse. I heard this loud sound, my ankle just cracked. And it was the loudest sound ever. At that moment I woke up instantly and I said, ‘I can never come back. Because if this person is capable of doing this to me, what could this person do to my dogs?’ And that was it. The idea of even returning for any reason at all, even for a piece of paper, No way. I’m never going to come back here again.

“But I had a problem, I had nowhere to go – if it wasn’t for URIPALS – I don’t know what would have become of me. I’m not exaggerating.

“People need a place to shelter with their pets. Unfortunately, my sister was in an abusive relationship for many years as well. And she kept going back only because and I mean only because she had nowhere to go with her dog, Gigi. She and her young son would leave. But then the abuser would threaten to do harm to the dog. It’s the manipulation and intimidation that happens. Thank God, she found a place, and they are all safe now.

“Once I was inside the URIPALS shelter, I was surprised and never really thought about how my dogs would help others. My two babies (her dogs) are good listeners, and have done a lot to help others, especially the children who seem to need that unconditional tail-wag.

“It took some time for me to get to a place to be able to share my story. Actually, I consider myself very blessed. Yes, I have made mistakes. But I did get out – some people don’t. I have two loving dogs, I’ve met some very compassionate people who have helped me, and I’m doing well, free of fear. That feels very good.”