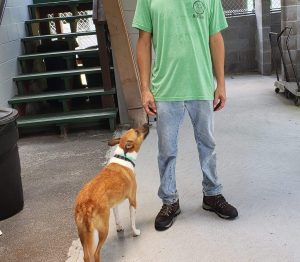 The world that we live in, especially in the United States, is a scary world for many dogs but none so much as the exceptionally fearful dogs out there. The expectations placed on dogs here can be exhausting to their emotional state. The amount of fear/anxiety that dogs who are worried about people/things/animals in their environment experience varies with each dog. Some dogs are so fearful that they shake and hide, some dogs seem to be “fine” but are really just too afraid to “say” anything for fear of "retribution". These are often the dogs who I am told “he let so and so pet him”. I ask their human if the dog had asked to be petted. I am then often told that the dog approached the person to sniff them. Unfortunately, that is not a request to be petted but it is often interpreted in that way. What it actually is, is an information seeking exercise. The goal of the dog doing this is to learn more about the human in question. They would prefer that the human simply pretend that they do not exist and remain still while being sniffed, until the dog is done sniffing. The dog will then generally retreat to whatever distance they have available/feel comfortable at, in order to process this new information. This sequence may or may not be repeated again. This often happens when out and about with their human, when said human is either interacting with another human in public or even when passing a human on walks. Reaching out to touch a dog that does this is exactly the opposite of what the dog wants. But it also occurs when visitors are inside the dog's own home.

Before I go further, I want to clarify which category of fearful dogs I am primarily writing about here. Nearly all of aggression is fear based but here I am discussing the very introverted dog. The dog who hides, the dog who crouches and tries to make himself as small as possible, the dog whose head will dip down while their shoulders hunch around them, the dog in whose eyes you can sometimes see deep sadness, the dog who tries to make himself invisible. This dog’s body language is a cry for understanding and space. This dog usually doesn’t display his fear as aggression. Dogs like this are internalizing the fear rather than externalizing it, so sadly it often goes unnoticed by their loving but uneducated in dog behavior owners. This fact is why they are presented as “enjoying pets”. In actuality, they are simply tolerating it, with even more fear, and wondering how to get out of the situation. That said, you will see many of the same information seeking actions in dogs that will display various form of aggressive behaviors in order to get humans to back off, if said human has misunderstood that information seeking action.

Asking dogs for consent to touch them is a whole article in of itself, so please read about that here. Understanding this kind of dog's behavior is important to properly inserting yourself into their world. Trust is earned by not applying social pressure and by minimizing your expectations. First and foremost, use non-threatening body language. Take a look at the graphic below for a lovely illustration that highlights in the green column the most frequently understood non-threatening body language that most dogs appreciate. But realize that even some of these are too much for the very introverted dog. The basics that are not intrusive: avoid eye contact (use your peripheral vision), do not directly face the dog (sideways posture when standing and sitting is best), do not loom or lean over the dog, and most importantly perhaps, do not directly walk towards the dog. Think about how uncomfortable you would feel if someone you did not know came directly at you while making eye contact and reaching for you. Now do you get it? Good. 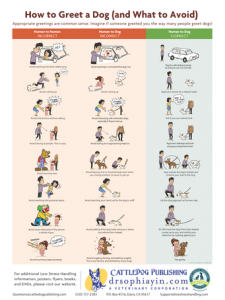 Making friends or at least, making yourself less threatening to such a dog often goes awry with good intentions when dog parents give the stranger a treat and have them offer it directly to such a dog. The conflict that creates is often staggering. Think about it. You are afraid of clowns. Let’s pretend for the sake of discussion that clowns are NOT really scary. (We know they are, no argument here!) But your husband has a clown friend over to visit without asking you. In the door walks that clown friend and in his overly large gloved hands is a bottle of your favorite wine, along with some of your favorite cupcakes. You REALLY want the loot but you are so just not ready to walk up to that clown and take the seemingly friendly offerings. You would prefer that he simply place the gifts in a convenient spot so that you can check them out later and then move himself away to converse with your husband, after a polite verbal greeting to you. You are then free to investigate and approve of the goods at your own comfort level. You watch the interaction between the clown and your husband, with no social pressure placed on you. At some point, you feel up to coming near your husband to sit and listen and feel the vibe put out by the clown. Eventually you may feel safe enough to interact with the clown. But even if that isn’t your day to trust clowns, you have learned that *this* clown at least, isn’t expecting anything of you. This is a good thing! Step one has been accomplished. 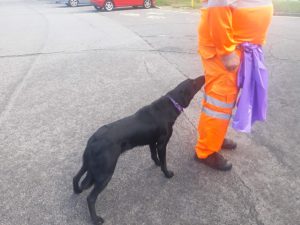 Uniforms can add to the fear for some dogs.
Photo credit: Jo Preston

Now let’s translate this scenario to a dog/human one. You are invited to your friend’s house and they have a very introverted dog. Instead of taking those tasty treats and offering them by hand to said dog, use your newly learned non-threatening body language and toss those treats BEHIND where the dog is and take a step away from the dog. Keep doing that in an appropriate back and forth manner until seated and then do it some more, all while avoiding eye contact and maintaining a sideways posture away from the dog. When/if the dog shows signs of wanting to investigate you more closely, stay still. The dog may approach you with a sniffing action directed towards the floor, which is similar to humans using their cell phones in doctor’s waiting rooms to appear busy. If the dog comes close to you and sniffs you, stay very still and do not make eye contact or reach for the dog at all. At some point, the dog will likely retreat to process the information that he gathered. Then you can toss more treats the dog’s way. Doing this when the dog is close will be a breach of the trust he may have started to have. You can at this point, however, start doing what is commonly known as treat and retreat.

Body language changes that can give you an indication that an introverted dog may be starting to feel more comfortable around you include: a more relaxed mouth position (open instead of tight); offering a sit or even a down (never ask this of an introverted dog in the presence of anyone they may deem scary); when in a down position, the more relaxed down with a flipped hip is a reason to softly and internally celebrate! But don’t show this externally or you will lose the ground that you have gained!

The last two behaviors that I want to touch on that are the vastly misunderstood are tap outs and kiss to dismiss. Tap outs are often seen as a request to have a belly rubbed. Unless the dog requesting this is your own behaviorally sound dog with whom you have a great relationship, a dog rolling over to expose his belly to a stranger is usually a tap out. In a nutshell that means, “please don’t hurt me”. Please don’t complicate things by rubbing that dog’s belly. Just get up and walk away and give him space and start from scratch. He will thank you for that. Kiss to dismiss is a dog licking your face to get you to move away. It’s similar to a tap out, in that it’s a request for space. But this is also something that is often done by a dog that you have a good relationship with, who simply doesn’t want to be up close and personal with you right at that moment. It’s very common with dogs who have interactions with small children when they are not comfortable with all of those interactions. Please respect those gestures for what they actually are. Ponder the context of the situation to determine the reality.

My goal is that this helps these severely introverted dogs to be better understood so that they and their humans will have much better relationships. The emotional safety that their humans routinely provide will also set these dogs up for being more interested in creating relationships with other humans who clearly understand their needs. There is no better gift that you can give these dogs than understanding them. And there is no better gift that they can give you than trusting you with their hope.

2 thoughts on “Hiding in Plain Sight: The Exceptionally Fearful Dog”