Home >> Positively Contributors >> Heading for the dog park with a dog-reactive dog?

Heading for the dog park with a dog-reactive dog? 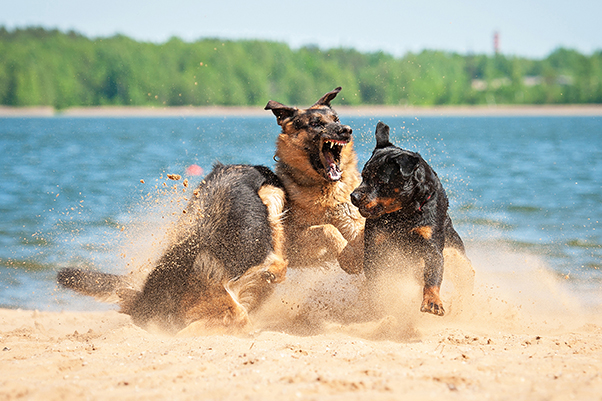 Gaining some insight into how their dog might be feeling can be a big motivator for people who use heavy-handed methods with their dog-reactive dogs, and can potentially make all the difference.

They may commonly label their dog ‘aggressive’ and resort to using force, which makes matters even worse. Without realizing it they are giving their dog no other options but to behave aggressively and he may even be pushed to redirect his frustration/fear/anger onto them. This is very damaging to their relationship. A dog should be able to trust the person who is restricting his freedom by having him on a leash.

Unfortunately many people still don’t know that there are other options. They may have been influenced by ‘quick fix’ methods seen on TV or the internet. It’s a question of education.

In order for people to have sufficient motivation to put in the necessary work, they must be convinced that what they are currently doing is wrong. Not only is it cruel but also it is inefficient.

To be convinced they need to understand their dog a bit better. I find that using a human analogy can help.

Prong collars, choke chains, rough handling, force and other aversive methods when a dog is in a situation he perceives as scary (whether or not he really is in danger is irrevelant – he perceives it as danger), is rather how they themselves might feel if they were the human in the story below: 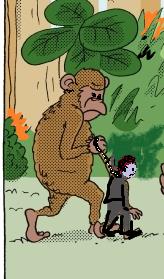 The Parable of the Gorilla and the Human in the Lion Park.

Gorilla takes his Human for his daily walk in the Lion Park.

A Prong Collar around Human’s neck is attached to a heavy chain. The Gorilla holds the heavy chain tightly in his Big Hairy Hand.

Human knows there are Lions about although he can’t yet see one. He thinks, if I walk QUICKLY we will get out of here sooner and he Strains on the Chain.

Pulling ahead Hurts his Throat.

Gorilla Yanks him back and SHOUTS at him. He holds Human Tightly beside him, tightly next to his Big Hairy Leg.

Human is now so scared he barely feels the prongs piercing his neck.

THE LION IS GETTING CLOSER……….and the Gorilla just keeps on walking!

Then he Grabs Human by his Hair with his Big Hairy Hand and Forces him to his Knees.

He holds him there.

Human waits for the Lion to POUNCE. He holds his breath. He freezes………

This time Lion merely Sniffs him and walks on.

Another time Human knows he may not be so lucky. Another time there may be Two Lions, or Three Lions. There may be Lions in front and Lions behind as well.

Anyway, the next day Gorilla puts a GAG over Human’s mouth before they enter the Lion Park.

That will fix him now, thinks Gorilla.

Thus ends the Parable of the Gorilla and the Human in the Lion Park.

Theo Stewart is a Victoria Stilwell Positively Dog Trainer and a full member of the Institute of Modern Dog Trainers. She is also a qualified schoolteacher.

More about Theo More Articles from Theo
JOIN THE CONVERSATION

25 thoughts on “Heading for the dog park with a dog-reactive dog?”