Home >> Positively Contributors >> Ebola: Where Do Dogs Fit In?

Ebola: Where Do Dogs Fit In? 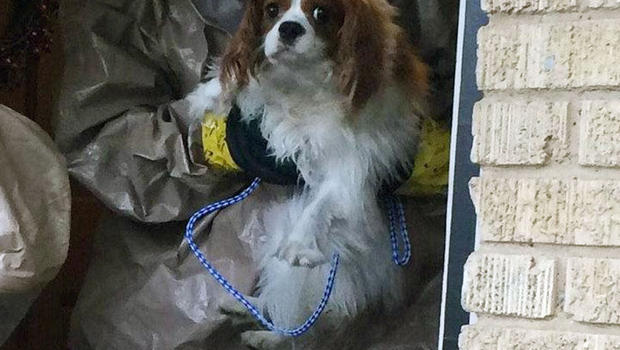 A heartbreaking photo of Bentley, the dog belonging to a nurse who came down with Ebola, being removed from his home. Bentley is currently in quarantine and will not be euthanized. Photo: CBS

People, by nature, are terrified by the unknown and a lack of control – and that is no doubt fueling anxieties regarding the Ebola virus. Now that it’s been learned that dogs may get the disease, those fears have added uneasiness to an already worried public, and for several reasons.

It’s not only that dogs may get Ebola, but apparently they can mount an immune response and they don’t become physically ill. While this is a good thing for dogs, people wonder “how would I ever know my dog has Ebola?” And that’s a good question. More meaningful, it’s unknown as to whether or not dogs can spread the virus to other dogs, cats or to people.

Experts suggest the likelihood of even a small-scale Ebola outbreak is the U.S. is miniscule, but if it occurs - people may be reluctant to get treatment early on for fear of what is going to happen to their pet(s). For example, when people are told to evacuate their homes as impending bad weather approaches, many won’t go unless they can safely take their pets.

The Spanish government recently took a surprising step by ordering that the dog belonging to an Ebola patient be euthanized. Aside from obviously impacting the already distressed family, not nearly as much can be learned from a dead dog compared to studying one that is alive. The dog could have been quarantined, which is currently the course taken to care for stricken Dallas, TX health care worker Nina Pham's dog -- a King Charles Spaniel named Bentley.

The dog is safe at an undisclosed location and is under the care of Dallas Animal Services. The dog will be observed, studied, and to the best of the caretakers' ability, spoiled. Pham's family has spoken about how much her dog means to Nina, but there are other reasons, for the greater good of society, why it's beneficial that the dog is kept alive. If researchers can figure out how dogs are able to fight off Ebola, there’s potentially much to be gained.

Human health isn't in it's own little bubble. The term one-health applies to Ebola in many ways....Most Americans now understand that the issue is International in scope (not only West Africa's), and it's more than about human beings.

It turns out West African fruit bat species (which are eaten as a soup in places in West Africa) may have been the point of origination, or 'Ground Zero' for Ebola. Like dogs, it's not likely the bats become ill with Ebola, by eating the infected bats (even in a soup) people became ill. Once that happened, the virulent disease spread among people. Scientists know that various other animals may also be contributing to spreading the disease, and that African great apes also appear susceptible to becoming very ill from Ebola.

So, what should pet owners do? Dr. Ron DeHaven, American Veterinary Medical Association (AVMA) CEO says “Nothing.” He explains that dogs can’t get Ebola out of the air; they must be exposed to an Ebola patient. As it stands now those individual patients are known, and they are isolated. As for cats – and whether or not they can get Ebola, no one knows. Pigs apparently can get Ebola, as for other food production animals – it’s also apparently an unknown.

DeHaven adds, “It’s certainly true that we are paying attention, and that veterinarians are involved in coordinating with the CDC and various experts and agencies. In fact, in an effort to keep people informed, the AVMA offers a page dedicated to Ebola on it’s website, www.avma.org - this is important, because so much misinformation is beginning to be disseminated.

4 thoughts on “Ebola: Where Do Dogs Fit In?”