Home >> Positively Contributors >> Don’t Take Their Word for It

Don’t Take Their Word for It 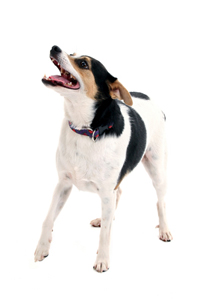 Picture this: you’re walking your dog at the park when you spot another dog and owner coming toward you. There’s something about the dog that gives you pause. You can’t quite put your finger on it, but that little inner voice is saying, “This is not a dog you want your dog to greet.” As you near each other, the dog strains toward yours. The owner calls out, “It’s okay, he’s friendly.” Who should you believe? The well-meaning owner, or that little voice in your head? The latter is always right.

All too often, we take the word of other dog owners as to how their dogs will behave. Most owners don’t purposely deceive others, but they may not have a realistic view of their own dog’s behavior or potential for aggression. Whether at the off-leash dog park, out for a stroll, or anywhere else in public, you must be an advocate for your dog. Regardless of what anyone says, if you feel a situation is unsafe, remove your dog as quickly and calmly as possible.

Sometimes the problem doesn’t involve ignoring someone else’s opinion, but having them heed yours. Just this morning I had Bodhi, our two-months-out-of-the-shelter husky mix out for a walk at the park. There’s a group of people who walk their dogs together off-leash in the mornings, and I recognized the older man heading back to his car with his Boston Terrier. The man is very friendly, and delights in feeding treats to other people’s dogs. But Bodhi is somewhat reactive toward other dogs while on-leash, and is definitely food possessive. When the man called out to ask if he could come over and give Bodhi a treat, I said I’d rather he didn’t, since Bodhi isn’t very dog-friendly. Undeterred, the man said, “Oh, I’ll just toss one to him then.” I quickly told him not to, since his dog was off-leash and would most likely run after the treat, but it was too late—with a cavalier, “It’ll be fine!” he tossed the treat toward Bodhi. As predicted, the little Boston went racing after it. Fortunately, the treat landed a few feet from us, so when Bodhi lunged for the dog I was able to stop him.

Why didn’t the nice man listen when I told him not to toss the treat, or that Bodhi was not dog-friendly? Why do some owners say their dogs are fine with other dogs when they’re clearly not? In the end, why doesn’t really matter. What does matter is that we are guardian enough to our dogs to chance social ostracism in order to protect them. Be courteous and friendly with other dog owners, but when it comes to questionable canine behavior, don’t take their word for it.
- Nicole Wilde, author Help for Your Fearful Dog

14 thoughts on “Don’t Take Their Word for It”