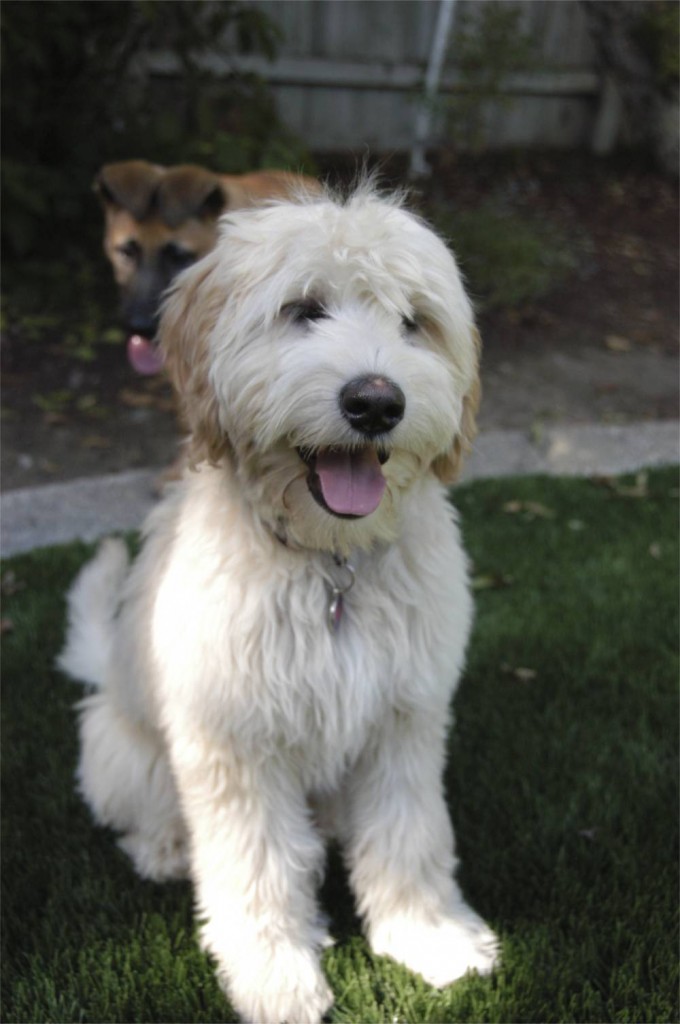 You've owned dogs for ages, you have pets galore.
You know all the stories, they're now just a bore.
But have you heard the one about Dennis? Dennis, the Dog Park Menace?
Rumor has it he's at every park. He comes in many disguises making him easy to miss.
Here's how he might appear.
The dogs are playing, each a brown or black blur
When off in the distance appears a mass of white fur.
The ball of white bounces, looming larger and clear
Then Splat! A squashed Scottie dog yelps out in fear.
He's friendly," calls the owner, but Scottie must disagree.
Her friends play nicely. They don't squish her like a flea.
Or maybe he looks like so:
A dog named Fetch is playing alone
He's chasing a tennis ball and a red rubber bone.
The Menace decides to stick to him like glue,
He never gets farther than a sock from a shoe.
Fetch tells him with body language to please go away,
But Dennis ignores him; he wants to stay.
Finally Fetch shouts in a growl meant to scare,
Which Dennis ignores then takes as a dare.
A scuffle breaks out, luckily no one is hurt,
Of course Dennis's owner says Fetch started it first.

Sound familiar yet? Your friend's dog?  Maybe sometimes yours?

While dog parks are ace playgrounds for Rovers to romp and Spots to socialize, without proper supervision, squabbles can break out like pimples on a teenager. Luckily physical injury is relatively rare, but sometimes the damage delves deeper than skin. A few bad experiences in an impressionable pooch can progress to a lifelong fear of other Fidos.

So what's responsible for these fun-spoiling spats? Most often it's owners on the snore. Says Trish King, behavior consultant at the Marin Humane Society, "Owners need to watch the behavior of their dogs and of the other dogs. Instead, they often stand in one area and chat, and while they're not watching, their dogs get into trouble."

If owners were watching, they might notice something surprising: poor social skills. Unbeknownst to some owners, dogs don't instinctively know how to behave in groups any more than kids know how to act at fancy dinner parties. They learn their code of conduct through interactions when young. Unfortunately, many miss the early lessons and have trouble catching up. While other dogs their age know when a look means back off, these naive newbies think everything is fair game. They tail terriers who want their own space and harass hounds by getting in their face.

A puppy socialization class starting at 8-12 weeks of age would have done these young Fidos good. They would have learned that other puppies of different sizes and breeds are nothing to fear. And that a yelp or a stare or a lift of the lip all mean the same thing – go away.

But even with puppy class, social skills may not be complete. Some still don't learn, the proper way to play and greet.

Says Dr. Ian Dunbar, a pioneer of puppy socialization classes, "Some outgoing puppies are overly friendly. They think that every dog is glad to see them. They don't know that you don't just go running up to an adult dog." For that matter, it’s even inappropriate to speed up to and crowd an unfamiliar dog your own age or even a shy dog who’s insecure.

Why not? A forceful hello is a huge etiquette fo-paw. A shy dog will take it as a threat. He may run if he can or learn to growl and lunge to protect himself. Even a confident, mature dog who wants his off-leash walk in peace, can loose his cool.

This may sound strange to those who think that pooches should be friendly all the time, just like well-socialize people should, but imagine this. You’re walking down the street by yourself at night when suddenly someone you don’t know comes running up to you full speed shouting and bouncing up and down in front of you. Or even worse, he hugs you and kisses you on the cheek. Regardless of this person’s intensions, at least some of you would be fearful or irritated even enough to fend him off. Or worse, imagine you’re a preschooler going to a new school on the first day, and as soon as you enter the yard a mob of shouting kids surround you. Some youngsters might take this greeting in stride while others may consider be traumatized for life. 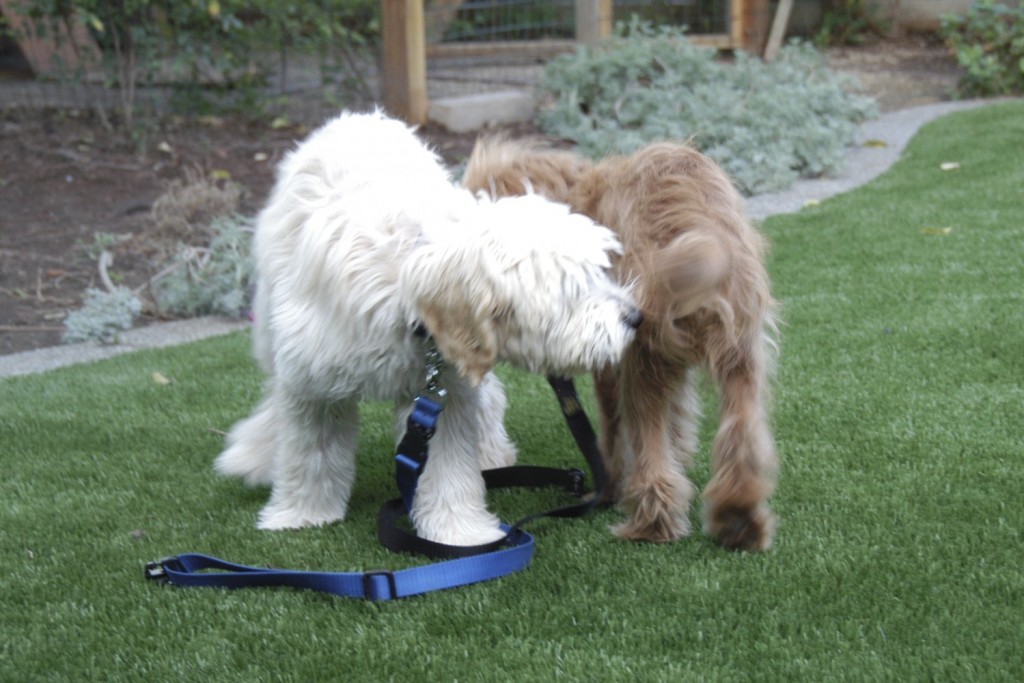 How to Fix Poor Greeting Skills
Luckily problems with poor greeting can also be fixed early on if your puppy class is structured well. A good puppy class lets the puppies play but has interruptions every few minutes where the owners have their puppies come when called to receive a treat reward. Then the owner keeps the pup focused on them for 5 seconds to a minute by playing focus games such as repeat sits or targeting so that the pup doesn’t just get the treat for coming and then blow the owner off. Once the puppy is clearly focused on the owner for at least 5 seconds, the owners can let the pups play again as a reward.

This game teaches puppies that interruptions are good. They come with treats and a pat on the head (for pups that like being petted in this high distraction situation) and are followed by more play. Consistent follow-up practice at the park, meaning 5-20 times per session right before play gets too rowdy, before Fido runs up too quickly to a shy dog accidentally instigating a fear-induced fight, and whenever you think Fido’s going to rudely jump on people muddying their pants, and you’ll be able to keep Fido out of all kinds of trouble.

What to Do for Fearful Puppies and Adult Dogs
For the slightly fearful youngster or adult Fido, all is not lost. You can teach Fido that good things happen to him when he’s around other dogs either by giving him treats continuously when other dogs are near or by having him perform alternate fun games where he focuses on and is rewarded by you when other dogs are near. Some fearful dogs will first have to practice just with calm, friendly dogs in a safe, quiet setting before they even get near a dog park. For others, the dog park is still okay, except when there are bullies, or dogs who keep coming uncomfortably close or too many dogs at play. Choose a time when only a few polite, respectful dogs are sharing the park. Then keep your dog's attention by interacting with him and rewarding with treats when these dogs even come near.

What about the Rest of the Dogs?
Even if you think your dog is perfect, other dogs are not. Sometimes it just takes a scuffle between two dogs to cause all the dogs to join in on the excitement. Or it’s one person training their dog with food to bring the worst mooching or jumping behavior in your pooch. In general to help prevent problems be sure to avoid standing in a clump which causes all the dogs to hang around looking for something better to do and to play in a small area which often leads to too many excited interactions. Instead, walk around the park randomly working on fun interaction games such as come when called for yummy rewards and a chance to go back and play or run after you and suddenly sit when you stop in order to earn a chance to fetch a toy.  By moving around and engaging your pooch, your dog’s learning that the park is a great place to bond and focus on you rather than a place to just blow you off and play with his more interesting friends.

When you notice potential problem dogs and situations move off to the side or walk faster to keep your dog’s attention and move further away. If everyone takes all the precautions you’ll keep your Fido from becoming overly aroused and rude. You’ll also help keep him from being the object of exuberant but pushy pups. As a result, you'll see peaceful play and your friends will think you have a perfect playground pooch.

Adapted from an article appearing in Pet Tales, San Francisco Chronicle in 2000

You can also read the following article:  Teaching Rover to Race to You on Cue