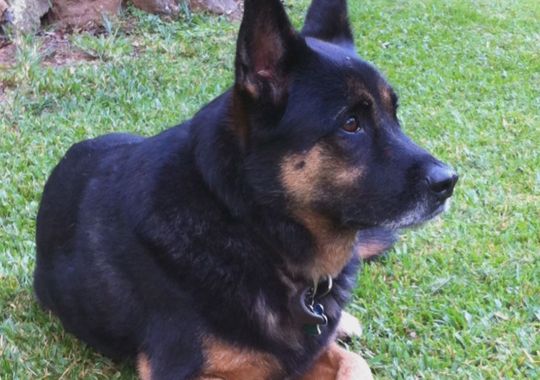 German Shepherd "Doctor" was shot in the jaw by a Dekalb County Police Officer.

It seems like there have been a lot of stories lately where an officer of the law, likely in fear for their personal safety, opens fire and shoots a family’s dog. Sometimes it’s been because the dog has attacked a family member or a neighbor. In other cases it’s because the dog shows aggression towards the officer. Yet, other times it’s simply because the officer was startled by the dog.

In this case, the officer was 32-year-old DeKalb County (GA) Police officer David Anthony Pitts. Officer Pitts had seven years of experience as a police officer. He was responding to a false home alarm when the dog, a German shepherd named Doctor, came running from around the house. Both the dog and the officer were startled, neither expecting the other to be there. Thinking the dog was aggressive and posed a danger, the officer pulled his weapon and shot the dog twice.

The dog’s human companion stated that he could almost understand why the startled officer shot at his dog. However, the dog’s human companion became upset when officer Pitts twice blocked him from trying to take his wounded dog to a veterinary hospital. This resulted in delaying the dog any type of medical attention for nearly an hour. Currently, Doctor is recovering after extensive surgery. However, the recovery is expected to be slow and the cost will be very expensive. Doctor’s family has collected over $11K in donations to help with the cost of the dog’s medical expenses.

As a result of this incident, the officer has voluntarily resigned from the police force. The police chief has now directed his department to document a policy regarding how officers are to handle potentially dangerous animals in these types of situations. Previously, there wasn’t a policy or specific training of this nature provided to officers. Some of the latest recruits were already taking this type of specialized training. But, it had not been mandated for the existing officers already in the field.

Georgia House Bill 803, which would require special training for all Georgia police officers on how to handle potentially aggressive pets, has failed in the past. The bill will be appearing before the house again in January 2015. The bill passed the State Senate this year, but failed to pass the House. I would encourage residents of Georgia to support the bill. For those not in Georgia, please review bills that support animal welfare in your states and look for ways to support them.

I sincerely hope that it doesn’t take additional stories like these to finally get action from the lawmakers of all states.