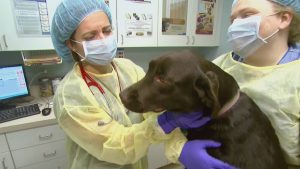 It’s nothing to sneeze at, an outbreak of dog flu affecting at least 11 states. After inundating Chicago with flu and bouncing around the country in 2015 into 2016, the H3N2 virus, which arrived from Southeast Asia, took a lower profile. Last month, the virus appeared on radar, and in a big way. The epicenter might have been two dog shows.

Guesstimates are 300 or more dogs have been infected with H3N2, among those approximately 30 to 40 confirmed via diagnostic labs. Also, there are several confirmed fatalities.

States with confirmed H3N2 are currently Florida, Georgia, Kentucky, Louisiana, Missouri, North Carolina, South Carolina, Tennessee and Texas. Some states appear to have only a pawful of sick dogs, others much more. In addition, H3N2 continues to be occurring in California, and many argue that H3N2 is endemic in the Chicago area, which means it may linger in the environment for a very long time.

Dr. Jerry Klein, chief veterinary officer at the America Kennel Club (AKC) says that it seems that initial reports coincided with dog shows in Perry, GA and DeLand, FL. No one will ever likely pinpoint how that happened. However, it’s not surprising to Dr. Cynda Crawford, clinical assistant professor University of Florida College of Veterinary Medicine, Gainesville “H3N2 is in the environment and could have been brought into the shows in any number of ways. Because there’s no immunity to the virus, which is novel in the U.S., most dogs exposed get the virus.”

Klein happens to be from Chicago, where H3N2 first hit, and he was at ground zero for the outbreak. He suggests what happened at the dog shows was similar. “At first, people assumed it was kennel cough, which is a nuisance but not awful. But just as in Chicago some dogs got significantly sicker. And we began to think about the dog flu pretty quickly.”

And that fallout is happening now. When the dog flu or canine influenza virus (CIV), hits neighborhood boarding or grooming facilities, or local dog parks, the contagious dogs bring the virus back home with them maybe blocks or a few miles away. Because dogs participating at AKC shows often reside states away, the bug has quickly spread.

The response among those in the dog show word has been swift. Over 200 dogs reportedly pulled out of the May 26-29 Blue Ridge Classic Dog Show, near Asheville, NC. And the Kennel Club of Texarkana 50th Anniversary dog show, which was scheduled for June 17-18, has been cancelled.

“Many handlers I know are getting their dogs vaccinated, and waiting the two to four weeks for the booster before working any show,” says Dr. Scott Tritsch of Georgetown, KY. He says he’s currently dealing with a group of 39 sick dogs that presumably have the dog flu. Among the dogs he’s treating are nine two-week old puppies. “Yes, still alive, but not out of the woods quite yet,” he says

Dr. Richard Hawkes of Morehead City, NC noticed that two of his Black Russian Terriers began to cough and run fevers shortly after returning from the Perry dog show. Within just a few days all his 10 dogs were exhibiting similar symptoms. Diagnostic testing confirmed H3N2. Those who exhibit dogs see no reason to test each one when it’s so likely they all have the same thing. It’s one explanation why there’s such a dramatic discrepancy in numbers between the dogs confirmed with H3N2 via a diagnostic lab, and those presumed to have H3N2. Why test them all?

Another explanation for the disparity is the cost of testing. Medically, encouraging the diagnostics is important. Clearly, veterinarians should know specifically what’s going on with an individual dog. Is it canine infectious respiratory disease complex (such as Bordetella or canine para-influenza) or it is canine influenza virus or even a co-infection? It’s also important to get a grasp on what’s happening in a community. However, convincing pet owners of the need to know this information can be challenging since treatment is about the same. And treatment, of course, begins instantly. No one wants to wait for test results to come back.

“I get it,” says Klein. “When income is limited, I’d rather see the client spend dollars on treatment.”

Another issue might be that some exhibitors are afraid or embarrassed to publicly admit their dog has flu, or some who may knowingly, irresponsibly but quietly travel to events with sick dogs. However, Klein maintains these are exceptions. He says that in his experience people are sharing information openly far and wide via social media. In fact, if anything, there may be some exaggeration. Via Klein, the AKC has been what some have described as “uncharacteristically transparent.” From the start, Klein (and therefore the AKC) has collaborated with medical partners, including the American Veterinary Medical Association.

As in Chicago, and all along with H3N2, the virus continues to have an extremely high morbidity – making many exposed dogs sick - and low mortality, as approximately three to five percent die. A low perfect, but not so low if it is your dog. Hawkes lost one of his Black Russian Terriers – though he’s quick to point out that his dog did suffer from additional medical issues.

“It was pretty scary to see my 10 big dogs taken down in a matter dog days,” Hawkes observes.

Scarier is what Dr. Edward Dubovi, director of virology section at the Animal Health Diagnostic Center at Cornell says, “We are sequencing all the time to determine if the H3N2 virus diverges into different clades (almost like sub-strains of flu). If that happens, it doesn’t mean that the vaccine won’t be effective. But it’s something to pay attention to.”

Dubovi says he not surprised by the fast spread because H3N2 because it is more contagious than H3N8, which was the strain of dog flu first identified in Florida back in 2004 after mutating from an equine flu into a dog flu. Also, more dogs get more ill from H3N2, compared to H3N8,

The other problem with H3N2 is that for an influenza virus it’s is quite resilient, and can live on objects like shoes or a veterinarian’s stethoscope and be transported. Also, about 20 percent of infected dogs feel great and never have a single symptom – but remain as infectious as the sick dogs. That is great for those individuals who feel up to chasing squirrels, but their owners have no way to know their dog is contagious.

The good news is that show dogs often don’t intermingle in the community, they likely stay at home or are on the road. However, that’s not always true. And anecdotally, it seems clear, at least some dogs now being diagnosed with H3N2 have never participated in a dog show or associated with show dogs. In at least some communities the virus has apparently spread into the general population. The good news is that – so far – there are no confirmed reports of the flu hitting a shelter or overwhelming a single population (as occurred in Chicago).

Unfortunately, the setting is ripe for a perfect dog flu storm – not only is dog show season ramping up, so is travel season. Even more threatening than dog shows are people about to head for vacations and their dogs will be boarded in spaces more susceptible to CIV transmission than a dog show, particularly when kennels offer dog play groups. Now would be the time to plan, since after an initial dog flu shot, a booster is needed two to four weeks later (then a few days after that for optimal immunity). Also, consider where you are traveling to. If you are traveling to a city with flu, there’s even a greater argument for vaccination.

Crawford says there are only two best methods of protection from CIV. Either dogs are totally anti-socia,l or vaccination. Crawford says if it was up to her, “You vaccinate all the show dogs – absolutely. This is the primary tool, it doesn’t matter if you’re talking people, dogs, horse or pigs. Vaccination is the strategy.”

As an exhibitor himself Hawkes notes that vaccination is a worthy investment, compared to the cost of treating many sick dogs. And, as it turns out, one of his dogs paid the ultimate price.

As for the AKC, they are by all accounts doing all they can possibly do to inform handlers and exhibitors, and have created a hand-out with all the latest information on CIV transmission, symptoms to watch for and best hygiene practices to minimize risk. The notice clearly indicates, “The best protection is vaccination.”

But should the AKC mandate the vaccine for CIV (either for H3N2 specifically or the bivalent vaccine for H3N2 and H3N8)?

Tritsch says, “This is a big deal not only for the dogs in the AKC shows and events, but for the communities the dogs return to.”

Dubovi wonders about the million-dollar question which he concedes requires a crystal ball to answer: Will the outbreak worsen or fizzle out on its own? “I don’t know, but I do know dogs have died – even if it is a small percent.”

Hawkes says, “The AKC needs to push now for all dogs to be vaccinated, and if your dog has been exposed – please don’t show for 30 days. The problem is that people may not know if their dog was exposed.”

Dr. Ronald Schultz, professor of Pathobiological Sciences at the University of Wisconsin School of Veterinary Medicine, Madison contributed to the American Animal Hospital Association Canine Vaccination Guidelines and has always spoken out against over-vaccination. He says,
"Dogs at risk should be vaccinated at least yearly with both influenza strains, H3N8 and H3N2, in addition to the other causes of 'canine cough.”

Klein concludes, “It’s tough. If we close for 30 days – as some have suggested – on day 31 the flu may appear. That really doesn’t seem to be the answer. Certainly, we endorse and encourage people to make their own choices based on all the information we can openly provide. And absolutely discuss this with your own veterinarian. If there’s a human influenza virus in New York City, and you get coveted tickets to a Knicks game or a Lady Gaga concert, do you still go? It’s a personal decision.”