Once upon a time, I was contemptuous of positive trainers. 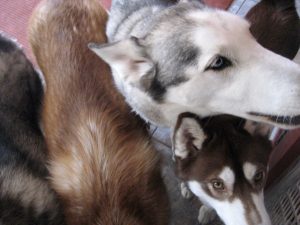 Not because I actually knew anything about positive training, mind you, which didn't stop me from being salty about the whole thing.

At the time, I had two Siberian huskies, both males, both under the age of two (I would later have four and up to ten at a time counting fosters).

To say they were a handful is like saying that a tornado is a bit of wind. To ensure the sanity of all involved, we walked at least four miles every day around a beautiful tree lined park in Huntington Beach, California.

The park was home to squirrels, rabbits, ducks, and other wildlife which meant that I was pulled on a regular basis to wherever the huskies wanted to go (once I actually hydroplaned while wearing slick-bottomed tennis shoes after a rain, thankfully before cameras were up everywhere).

I tried to control the pulling with a combination of my 'energy' (didn't work), nagging leash pops (flies landing on them through their thick fur) topped off by hissing 'tsssst!' just like I saw on television, with plenty of STOP IT's along with more colorful language (none had any effect except to make me feel like I was doing something).

One beautiful day as we were on our first round of the park, I saw a young guy on a skateboard being pulled by a muscled silver Staffordshire Terrier quickly approaching. As they neared, the guy politely  jumped off his skateboard, tipped the nose of the board up and caught it as he issued a calm “sit” to his dog, who did indeed sit, with military-like precision, where he remained with quiet focus, looking up at the guy.

I, on the other hand was red-faced, sweating, and struggling to pull my howling, barking, straining dogs past them, desperately 'tssssst-ing' all the while.  As we finally were out of leash-reach, I heard a click! and turned my head in time to catch the guy skillfully twirl his skateboard with one hand to the ground, nimbly jump aboard and toss a treat into his Staffie’s mouth as they seamlessly resumed their run.

It was a beautiful display of control and team work.

You would think that my response would be one of admiration and curiosity at how this was achieved. Nope. What did I think, as we struggled to get past this amazing display of effective training? I’ll tell you, although I still cringe at the thought; “Jerk. He has to use a clicker to get his dog to sit”.

(I will pause as you take that in.)

It stayed with me.

From time to time, my thoughts returned to the skateboarding guy and his dog, remembering how willing his dog was to comply with his softly spoken “sit”.

Cut to a year or so later. I found “Don’t Shoot The Dog” by Karen Pryor after adopting another young male husky with serious behavior issues (he’s the one in the picture below, my Dante, my heart). The book changed my life and Dante's life (which is another story for another day). I became an advocate for positive training. Now I work for the Victoria Stilwell Academy and I am grateful to be a small part of watching new positive trainers change the world. 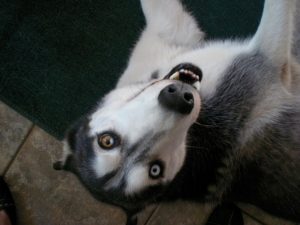 Here's the real take-away: change happens from within.

It can get really discouraging out there in the land of dogs (and all animals). We often feel like we are not making any progress in how they are treated. But we are.

In the meantime, be the change you wish to see in the world. You may change someone's life and never know it.

This is way overdue but thank you, guy on the skateboard in Huntington Beach. You changed my life.

More about Christina More Articles from Christina
JOIN THE CONVERSATION