Home >> Positively Contributors >> Behind the Scenes of Greatest American Dog : The Maze

Behind the Scenes of Greatest American Dog : The Maze 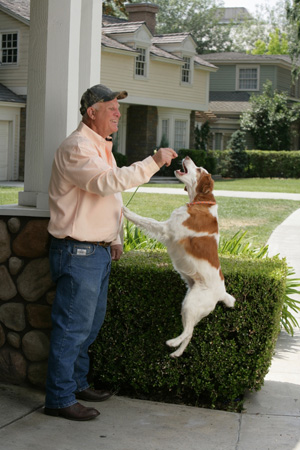 Our first challenge paired us with Bill & Star. One of our dogs would have to ring a bell and the other one would need to dig through some mulch in order to pull a rope to release their owner in the box below. To prepare for this challenge, we had to teach our dogs to dig. Some of you may have dogs that already dig on their own. Our challenge was to get them to only do it when we asked. What we did was hide a treat under the mulch. They would then paw at it to get it out, each time burying it a little deeper. Once we knew they would dig when they saw us put the treat in the mulch, we would then add the command “dig”. It is very important when training dogs that we teach the behavior before we add the command. Once we know they will nail the behavior, we add the command. It’s important they succeed every time we use the words (commands) or the commands will lose value.

After winning the first challenge, Bill and I were given a leg up in the next elimination challenge. The challenge was to see if our dogs could work their way through a maze while bringing puppies with them. Our leg up was to let them hang out with the puppies previous to the competition. Unfortunately, this worked against us. As Presley played with the puppies really well at first, he soon became annoyed and bored with them. So, by the time we did the challenge he didn’t want to have anything to do with the pups. Take a look: