Home >> Positively Contributors >> Behind the Scenes of Greatest American Dog – Dog vs. Elephant

Behind the Scenes of Greatest American Dog – Dog vs. Elephant 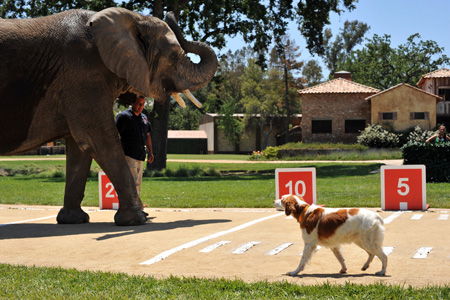 A few weeks ago, I was watching a show on CBS during the Saturday morning “informational and educational” hour called, Lucky Dog. The host is actually the brother of the CBS dog trainer that worked on our show, Greatest American Dog. He was acclimating one of the dogs he was training to things outdoors; cars, skateboards, etc. As a shock to the viewers, they brought in an elephant named Suzie and said something along the lines of- Don’t miss when we return from the break, our dog in training will face a 9,000 pound elephant, never done before by a dog! Okay, that might be a little dramatic, but all I could think was it HAD been done six years ago by Presley, Leroy, Star, Andrew and Galaxy! They didn’t all sit still, but they all faced the elephant even if only for a few seconds.

Many people asked us after the show if we had seen the elephant before they captured our reactions on camera. The answer is no, although once we saw the elephant it was important that the elephant and dogs had a short acclimation process. Suzie, the elephant, was very well trained but the dogs needed time to sniff, walk around and just be in the presence of the elephant to understand that it wouldn’t harm them. The acclimation process focuses on making sure the dogs have a good experience around Suzie. I would walk Presley around Suzie, talking to him in a kind, soft voice. “Lookie there Pres, what’s that? What is that? Good boy, gooood boy.” Treating along the way, anything that helps Presley associate Suzie with positive things.

We each had about 5 minutes with Suzie and then the challenge was on!

The elimination challenge was one of the biggest challenges we had up until this point. Our dogs were all fitted with a zip line harness, which Presley hated at first. Then, we had small scale obstacles that resembled what we would be faced with on the day of the challenge. From there, it was our job to acclimate our dogs to the harness and obstacles. As you will see in the video, I was very observant of what was working for the other contestants. I wasn’t confident in my training at the time, but I knew if I could be consistent and clear for Presley, he would deliver. Then I saw the one and a half story rig they built for our dogs to jump from and had second thoughts.

Star and Andrew didn’t jump and in the end Star was sent home. Bill was so sweet with Star and knew it just wasn’t something she felt good about doing. Presley on the other hand, well the judges had their theory. They said, “we aren’t sure if Presley jumped because you asked him to or if it was because he is just young and doesn’t know any better.” Either way, he did it because I asked him to and he trusted me… isn’t that what this competition is all about?