Home >> Positively Contributors >> Be a Witness 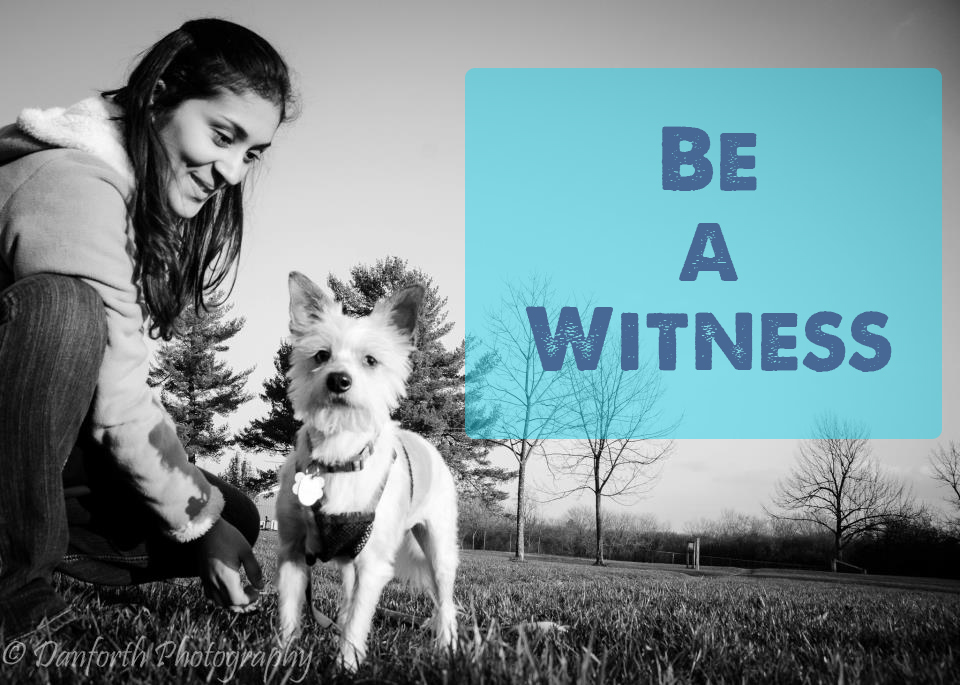 It’s common to walk down the street and see someone kidney kick their dog or leash jerk them to the point of paralysis for “misbehaving”. You may be enjoying your weekly jaunt to the dog park and find more than one person flipping their dog on their side because the dog is acting “dominant” or electrocuting them with a shock collar.

With the information we now know about not only the physical pain this causes our companion animals but the psychological and emotional damage that can be done, it is very hard to stand by and say nothing. Where does this land on our moral compass, and how do we intervene so that not only does it stop then and there, but the future of the dog with their human looks much more promising?

You Can Do Something

It is still legal to train your dog using punishment such as leash pops and alpha rolls and it’s very hard to watch but it’s usually not effective to publicly shame someone for doing so. A confrontation may stop what you are seeing momentarily but it may mean the owner will dig their heels in further and continue treating their dog this way. But you don’t have to remain silent. Try and see if there is an open door for you to engage in a helpful way.

“Dogs can be really challenging, can’t they? If you need any help I know a great trainer.”

You can direct them here for recommended trainers in their area. If this person is open to help then great, but you have to be prepared that they may not think they need any help.

Colleague Casey McGee of Upward Hound in River Falls WI, who has a background working on issues of violence against women, thinks we can borrow a page from other non-violence movements. She reminds us that it used to be legal to use force against our children and partners, too. These days, the laws have changed and most people feel that it’s wrong, but often don’t know what to do when they see someone being violent with a family member in public. Many in the domestic violence field suggest that your silence and discomfort, your natural inclination to stay out of other people’s business, lets the abuser’s actions often go completely unchallenged. But instead of risking a potentially dangerous confrontation (and after calling the police, of course), be a witness to the violence and the suffering. Stand in the person’s line of sight and by your presence let them know that they’re observed.

With dogs, the violence often doesn’t rise to the level of a criminal act. But you being a conspicuous witness may suggest that you don’t think their actions are justified. That the object of their wrath is suffering. That you are horrified. By letting the person inflicting the pain see that someone is watching, they may get the message that it’s not ok to inflict suffering on an animal in the name of training. At the very least, one person will have let them know that what they’re doing is not “normal” enough to ignore.

We Need To Start Questioning the “Experts”

As consumers it’s very difficult to determine who to hire as a trainer or who to believe when watching television programs when we need help. We assume they are experts in their field and we trust them. Just remember, without industry regulation anyone can print business cards and put up a website, and apparently with the right personality and charm you may even be able to star in a television show that is viewed by millions. We need to question the “experts” when it comes to animal welfare, behavior and training.

This brings us to the question of why certain trainers (celebrity or not) are still using and teaching punishment based techniques when the most current behavioral science and the leaders in in animal learning and welfare state it is not effective and it is harmful? Read the AVSAB’s (American Veterinary Society of Animal Behavior) position statement on Punishment here. Punishment works quickly to shut behaviors down initially but the downfall and side effects are plenty and very risky. That “quick fix” is very appealing to us as consumers and many of these techniques will yield that initial result.

In closing, if you see a situation unfolding that you aren’t comfortable with and feel helpless to do anything just remember that there are options. You CAN do something which is better than remaining silent and regretting you hadn’t at least tried.

Renée Erdman is a Victoria Stilwell Positively Dog Trainer and behaviour consultant focusing on the emotional needs and welfare of dogs and their guardians. She resides in North Vancouver, BC Canada where she runs Bravo Dog (www.bravdog.ca), her pride and joy.

More about Renée More Articles from Renée
JOIN THE CONVERSATION

3 thoughts on “Be a Witness”