The Missouri citizen initiative to combat puppy mills, approved for the ballot in early August by Missouri Secretary of State Robin Carnahan,  has cleared perhaps its final hurdle and is now almost certain to appear on the Nov. 2 ballot for a vote of the people. The measure is Proposition B, backed by a coalition of humane groups including The Humane Society of the United States, and we’ll be urging Missourians to vote YES! on Prop B this November. 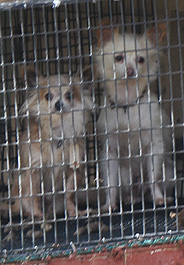 Dogs in a Missouri puppy mill. Photo credit The HSUS.

On Aug. 13, a Cole County judge upheld the ballot title for the measure, ruling that the ballot summary drafted by Secretary Carnahan was "neither insufficient nor unfair."

Karen Strange, a lobbyist for the commercial dog breeding industry, challenged the language of the petition summary that voters will read. She and her attorneys took issue with the language that calls for misdemeanor penalties for people deemed guilty of the crime of "puppy mill cruelty."

The judge sided with us and with Carnahan, who argued that by putting the phrase “puppy mill cruelty” in quotation marks, the office showed that it came straight from the petition. Our attorneys pointed out that accepting Strange’s arguments would require the Court to ignore dictionary definitions and the legislative judgments of at least four other states that had passed similar commercial dog breeding regulations.

The puppy mill industry put tens of thousands of dollars into legal maneuvering to prevent a vote on the issue. They banked on this effort after they failed in their gambit in the state legislature to put a measure on the ballot to block just about any animal welfare measure on any ballot, including the anti-puppy mill initiative.

With all of the industry's courtroom and legislative antics failing, the voters will now have a chance to crack down on puppy mills in the state that has more than a third of all mills in the nation. Perhaps 40 percent of all dogs put into the pet trade come from Missouri alone.

We at The HSUS will dig deep to expose their cruelty and to urge the people of the state to vote in favor of this commonsense and long overdue reform. Dogs should not be abused in these factory-style operations. Here’s a best chance ever to deal a blow to this unscrupulous industry.

Wayne Pacelle is the president and chief executive officer of the Humane Society of the United States, the nation's largest animal advocacy organization. He took office in 2004. Since joining the HSUS, he has played a role in the passage of more than 15 federal statutes to protect animals.

More about Wayne More Articles from Wayne
JOIN THE CONVERSATION